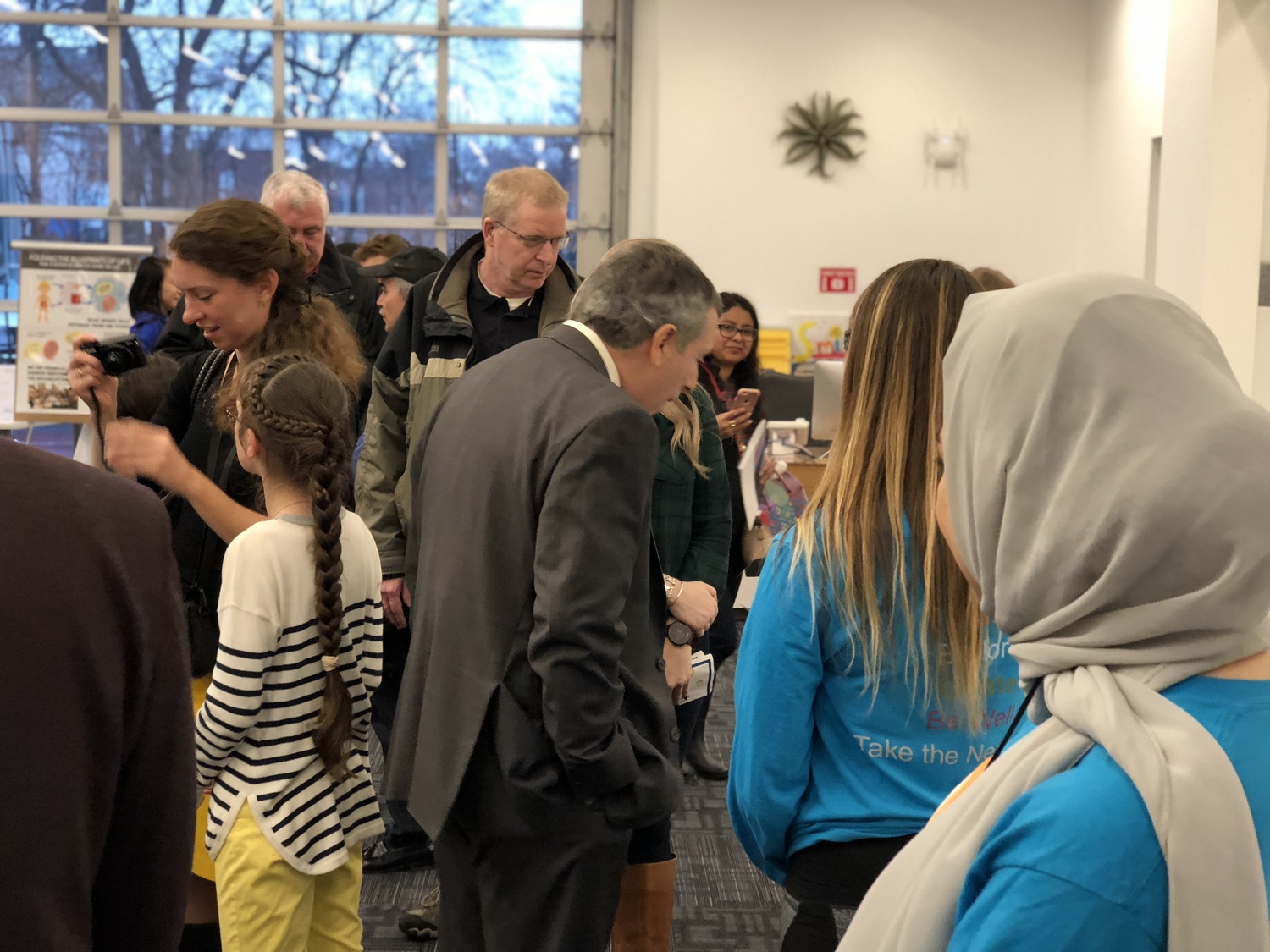 The Allston Ed Portal, removed from the buzz of construction and traffic on Western Avenue, is a hub of activity on an average Tuesday afternoon.

Children work on projects from telling stories about humanity's victory in soccer over extraterrestrial beings in a "Universe Cup," to extracting strawberry DNA, to presenting improv skits.

Ten years ago, the space at 224 Western Ave. was an unused garage owned by Harvard. In March 2015, Harvard opened a brand new facility to house the Harvard Ed Portal as part of the University’s “cooperation agreements” with the city of Boston amidst Harvard’s long-term expansion into Allston.

Mentorship: From STEM Origins to “Virtually Every Field” Today

In the wake of the 2008 financial crisis, former University President Drew G. Faust halted the construction of the School of Engineering and Applied Sciences’ planned campus in Allston. Despite this setback, the University followed through on their agreed upon plans for community outreach detailed in their agreements with Boston. The Ed Portal opened in June 2008.

One of the agreements was the creation of the Ed Portal. The Portal, run by the University’s public affairs and communications arm, serves as a hub for Harvard’s neighborhood outreach efforts in Allston.

Among these efforts is the Ed Portal mentoring program, which pairs Harvard undergraduates as mentors with Allston elementary school students. The mentors and mentees meet once a week to work through projects combining personal interests and academic or personal growth topics.

The program was the brainchild of Robert A. Lue, faculty director of the Ed Portal and a professor of the practice of Molecular and Cellular Biology. Lue, aware of Harvard’s future in Allston, approached the University more than 10 years ago with an idea to increase the University’s engagement with the Allston neighborhood.

“The mentoring program was one of the critical things we wanted in the community of Allston,” Lue said.

The program started with an emphasis on science and math but has since expanded to “virtually every field you can think of,” Lue said.

“What we’re really trying to do is to create an opportunity here in Allston for Harvard students, the College students, the graduate students as well, to come and form a new community with the youth of Allston," he said.

For Christopher Li ’18, this appeal worked.

“Getting off campus, kind of getting to a different space, working with people who aren’t Harvard students, who are high school, middle school students from the local community, breaking out of that bubble was refreshing, but also a bit inconvenient,” Li said.

Li said the distance of the Ed Portal from Harvard’s main campus across the Charles River in Cambridge poses a bit of a challenge. Currently, there is only one Harvard shuttle route that travels through Allston.

Susan L. Johnson, a manager at the Ed Portal, also noted logistical difficulties in determining schedules between mentors and mentees. At the start of each semester, as mentors select their courses, the Ed Portal juggles varying schedules as they try to match mentors with mentees. Johnson said this also leads to a fluctuation in the amount of mentors each semester, sometimes causing a shortage.

'Each Generation Helping the Next'

On Sunday afternoon, the Ed Portal filled with nearly 100 mentors, mentees, families, local Allston residents, and Harvard affiliates. Each semester, the mentees, with help from their mentors, present the projects they have worked on during the semester. This year’s fall 2018 cohort consisted of 20 mentors and 161 mentees.

Some of the guests present Sunday were particularly high-profile.

This was Bacow’s first visit to the Ed Portal, where he spent roughly 30 minutes greeting mentors and mentees. Mentees excitedly showed Bacow around their science lab, where smoke from dry ice tumbled around the room, and showcased their projects, including an iPad-controlled robot that erased markers from a whiteboard.

Bacow then shared a story from his own youth in Pontiac, Mich.; he said he was a “math and science geek” growing up.

“I actually had my life changed by a mentor, who I encountered actually when I was in high school,” Bacow said.

This mentor, his high school librarian, introduced him to a biography of Thomas Jefferson, which helped him “emerge a little bit from my math and science shell.” He attributes his current deep love of history and literature to this experience.

“I hope you guys will always be stimulated to keep learning,” Bacow encouraged the students. “But I also hope that someday you guys will become mentors yourself.”

Bacow’s concluding message expressed hope the program will continue to inspire young students to look forward and for older students to give back.

He added, “We’re creating and reinforcing the tradition of each generation helping the next.”

A previous version of this article incorretly indicated that Harvard and Boston forged an agreement in the mid-noughts to build an "Artlab," which later morphed into the Ed Portal. In fact, the agreement specifically stipulated the creation of the Ed Portal.