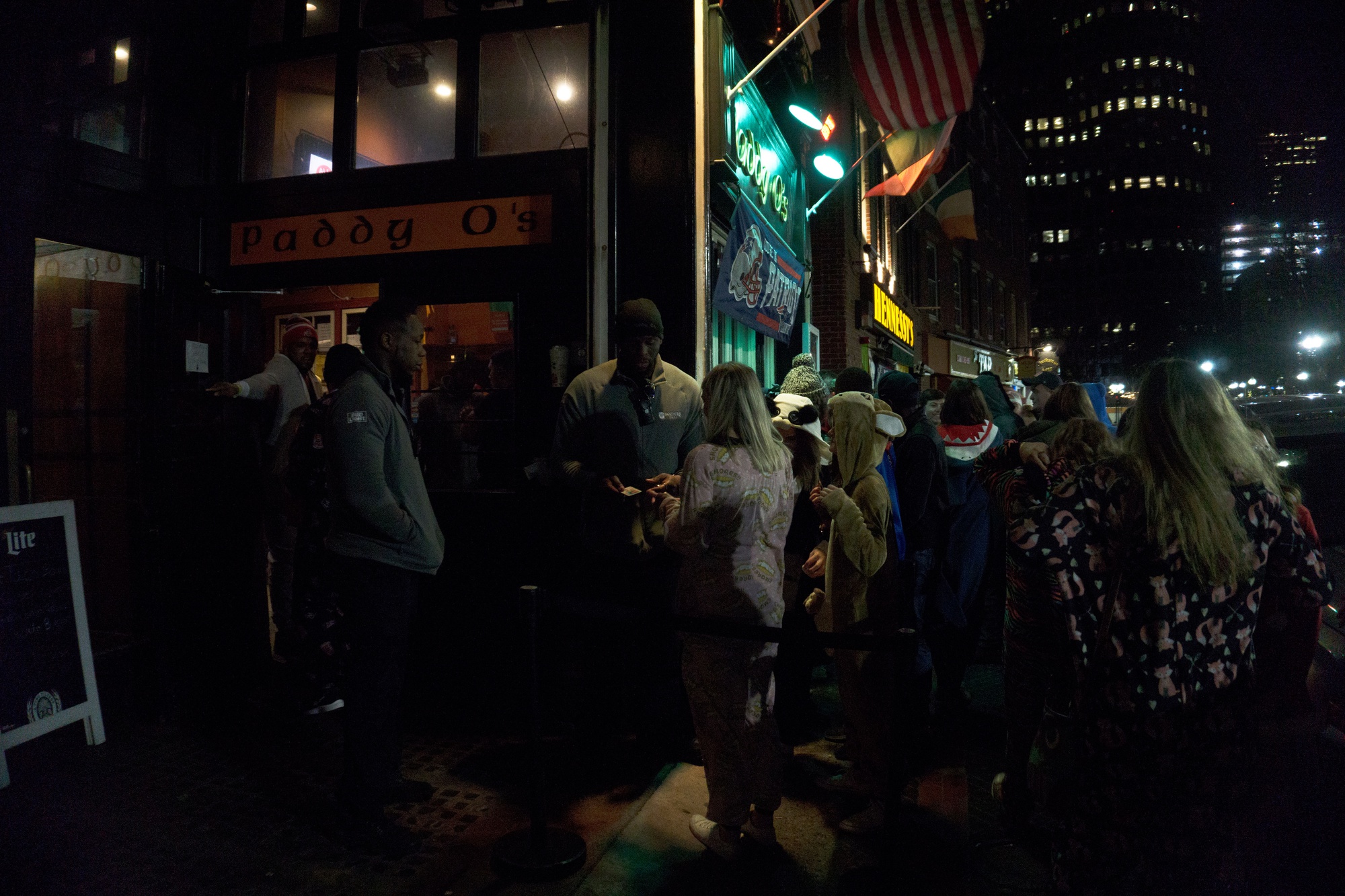 Onesie-wearing patrons wait in line to enter Paddy O's, one of the first stops on the Onesie Bar Crawl.
Advertisement
Advertisement

Batman and Totoro Walk Into a Bar

On Saturday, Boston’s first Onesie Bar Crawl was held from 2 to 10 p.m., drawing more than 2,500 attendees in what the organizers, Party America and We Love Onesies, termed “the most comfortable outing of the year!”
By Alan R. Dai

I see my first onesies as I exit the T: a half-herd of barn animals hooting as they cross the street. The cow makes a face at me, the udders on his fleece-lined chest lashing around. Down a block, and there they are, running down Union Street and curling around the corner: A line of onesie-clad adults crowding the sidewalk, yelling at passersby and themselves. A Pikachu takes a drag on her cigarette. Someone has stepped on a glitter-dusted dragon’s tail, and a shouting match ensues. Four Powerpuff Girls (there’s an extra blue one) chant, “Jello shots! Jello shots!” It doesn’t catch on. It’s about 3:30 in the afternoon.

On Saturday, Boston’s first Onesie Bar Crawl was held from 2 to 10 p.m., drawing more than 2,500 attendees in what the organizers, Party America and We Love Onesies, termed “the most comfortable outing of the year!” Attendees flocked to the Bell in Hand Tavern—the self-declared oldest tavern in America—along with six other venues along a stretch of the historic Freedom Trail in downtown Boston.

Just past the end of the line, the Haymarket produce market is bustling. A confused hybrid penguin-unicorn stares as produce sellers hawk their cabbages and squash. Around the corner, down Union Street, doormen chant, “Four dollar beers, seven dollar cocktails,” to the passing masses. A panda mutters, “I don’t drink beer,” and harried-looking tour guides try to make themselves heard over the din. A stormtrooper (Jackie J. Ludovina) and a Darth Vader (Cameron J. Dennis) are less interested in the historic buildings than in the line assembling outside of a nearby bar called Paddy O’s.

They’re here, after all, “to drink,” as Dennis says.

“It was a last minute thing,” Ludovina explains. “This was the last onesie they had.”

Did they wear onesies when they were kids? “Actually, when I was a kid, I would dress up as a bear. A lot. So I grew a reputation of being a bear. But I’ve moved on from that, and now I just do onesies,” Cameron says.

Adult onesies have exploded in popularity in recent years, as Norway-based OnePiece and Japanese Kigurumi suits have gained celebrity endorsements and occupy a niche in popular perception between irony and apathy. They fall somewhere in between the comfortable-yet-stylish—think Birkenstocks, Uggs, flannels—and the function-over-form crowd—think Crocs or Skechers. It’s normcore taken to its least logical end, the irony turned so far past 11 that it’s hard to tell who’s serious and who’s not, all mixed with this weird kidult craze that’s developed around adult coloring books, adult summer camps, and adult preschools. The New Yorker calls it the “Peter Pan market.”

But no one’s wearing $80 OnePieces or Kigurumis on Union Street. “It was a really cheap costume at Walmart,” Brendan M. Ennis explains, pointing at his Deadpool suit. Is he a diehard fan? A shrug. “Sure, I like him, yeah.”

The infantilizing doesn’t go more than skin deep, however. A Woody from “Toy Story” and a kangaroo make out in front of Paddy O’s. Woody’s hands are wrist-deep in her fluffy synthetic pouch. A gang of Teenage Mutant Ninja Turtles encircle a futuristic-looking vape in an nearby alleyway. “Where’s Maria? Where is Maria,” yowls a black cat.

Anthropomorphized animals are a popular costume choice, as are cartoon characters: Pikachus are ubiquitous, as are Minions. Outside the Bell in Hand Tavern, one Minion weeps softly in her baggy blue overalls and cradles her ID as Lil Yachty booms inside. The Patriots are also popular, as is the American flag. Each garment carries a kind of inexplicable softness—people are eager for me to touch their onesies and see—and everyone seems cozy enough in the balmy 50 degree weather. In fact, already some of the onesies are coming off: People emerge from bars sweaty and exultant, the top halves of their raccoon or shark or Winnie the Pooh selves dismembered, useless cotton entrails hanging off their waists.

Further down the street, a Superman and Batman sprint past Faneuil Hall, fleecy arms outstretched, soaring past shopfronts. A disgruntled Spiderman trots behind them, asking them to wait up. More original costume choices start trickling out of the bars: a Twisted Tea bottle saunters by, and then Chuckie from Rugrats, glasses too small for his face. It’s five by now, and Ubers keep pulling up, letting out streams of revelers, clown car style. Inside Hennessy’s, a live band plays to a onesied crowd. Most of them have their backs turned to the music and are more interested in their phones, but there is a lone pair of flying squirrels dancing wildly in front, vestigial wings flapping to the beat.

No one seems to know whether the whole onesie thing is anything more than a cozy novelty, but everyone knows why they’re there. Pat Murphy of Somerville says, “I needed to get out of the house,” while Heather J. Gaccione and Krystin A. Parker travelled from Connecticut and Rhode Island, respectively, for a “Girl’s night! Squad! Squad night!” Onesie choice seems more defined by whatever was left at Walmart, or cheapest on Amazon than any aesthetic compulsion. That’s not the point here. It’s more so a kind of masquerade ball, where you can zip up your Puff the Magic Dragon costume and get drunk on four dollar onesie-punch (a real thing!) and a false sense of nostalgia. It’s a good time.

One of many Totoros stops in the lamplight—it’s nearly seven by now, and the sun has set. He gives his name only as Totoro, and he has come “to get drunk in costume.”

Did he ever wear onesies as a kid? “Just as an adult,” he says, and another Totoro behind him nods in solemn agreement.

— Magazine writer Alan R. Dai can be reached at alan.dai@thecrimson.com. This is the first installment of his fashion column, Live Fresh or Dai, which will have him traveling around the city to various events that are, however obliquely, fashion-related. Next week: a sneaker expo. Follow him on Twitter @dai_alan_dai.