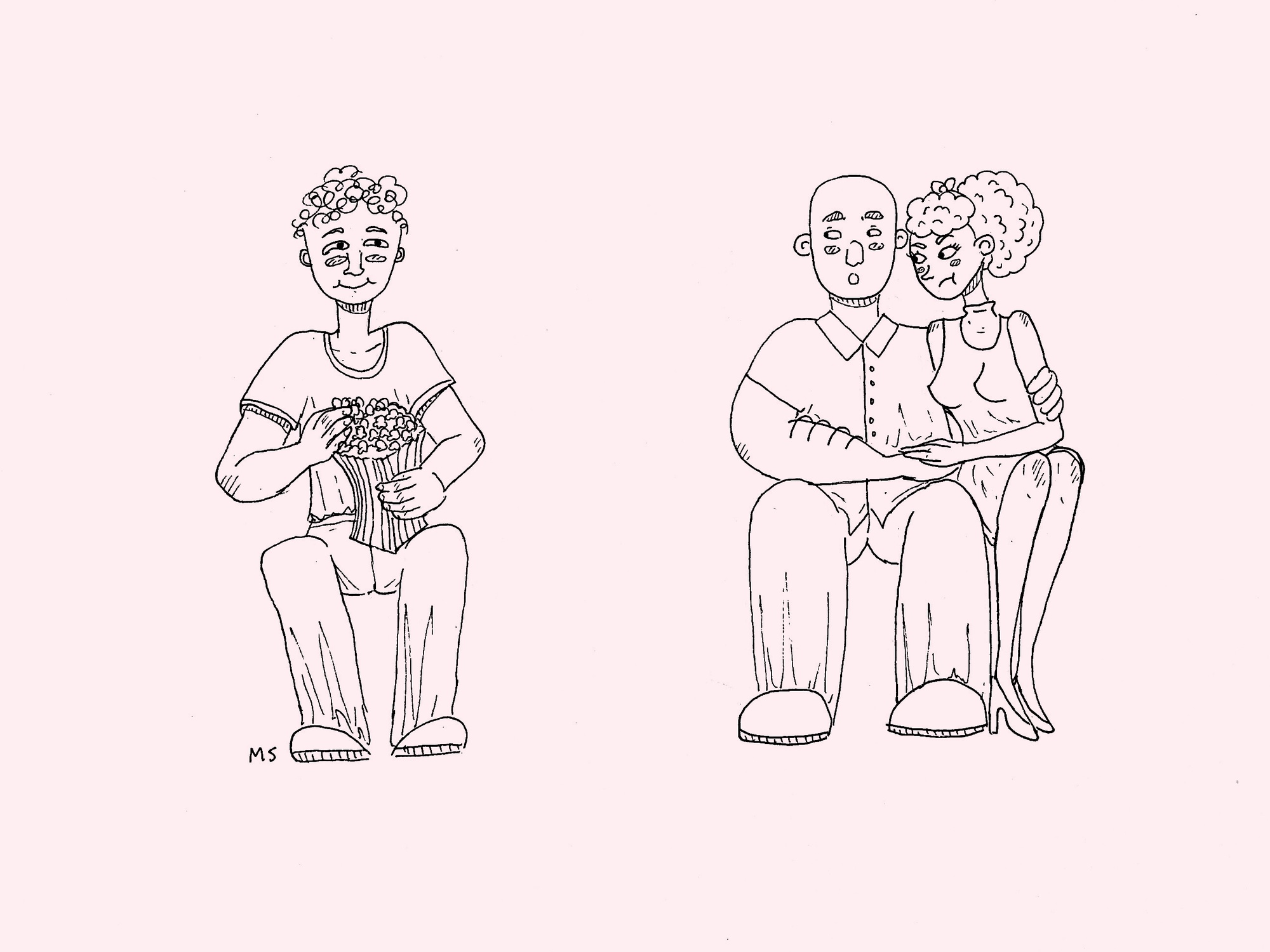 For FM's "Contemporary Romance" feature, FMC takes us to the movies.
By Frank M. Cahill

Of all post-structural feminist queer-and-gender-andfilm-aesthetics theorists, Patricia MacCormack is without a doubt my hands-down favorite.

Hailed by Rosi Braidotti of Utrecht University as “the ultimate third millennium sexual radical”—as if there’s any other kind—MacCormack is the author of such groundbreaking literature as “The Queer Ethics of Monstrosity” and “Becoming-Vulva: Flesh, Fold, Infinity.” She currently holds the position of professor of Continental Philosophy in English and Media at Anglia Ruskin University, Cambridge, where she conducts research in European horror film, animal studies, and post-human theory (I totally know what this means…).

More importantly, however, MacCormack is the daring intellect behind perhaps the most important philosophical unearthing of the 21st century.

Yes, you read that right.

And yes, that is a portmanteau of cinema and sexuality.

And yes, I firmly intend to write the next 900 words about it.

I first came across MacCormack’s aptly named treatise on the matter, Cinesexuality, last spring during my Expository Writing course. (Please, don’t ask). I developed an immediate obsession. The first time I tried explaining her theory—to friends over diner, admittedly not the best choice—the operative word was misheard as ‘cinnamon-sexuality.’ To this day, the red powdery stuff doesn’t taste quite the same.

Once the jargon was hammered out, we turned to the text and began, as is proper, with Chapter 1: “Cinesexuality is the desire which flows through all who want cinema as a lover. It knows no gender, no sexuality, no form, and no function.” Damn, Patricia. Damn.

My friends and I had a good laugh. They thought it ridiculous, and I can see why: with chapters titled “Cinemasochism” and “Zombies without Organs,” the buy-in was remarkably high, and her claims seemingly caught up in their own cinematic grandeur. I finished the book, all 149 pages, and still hadn’t a clue as to what it all meant.

The showing was particularly late: 11 p.m., and a 35-minute drive north. Nothing my rising-college-sophomore self couldn’t handle, I told my mom, using that deep earnest voice I use when attempting masculine self-assurance. Begrudgingly—after a stern but kind runthrough of basic road safety—she relented. I waited in sweaty-palmed anticipation the rest of the day, urging with every other thought the sun to set, and to hurry up with it!

I had places to be. People not to meet. A movie to see.

Afire with anticipation, I fished out from under a stack of Vanity Fairs and Condé Nasts the then-fouryear-old “100 Greatest Films of All Time” edition of Entertainment Weekly. What was left of it, at least. The cover had long since torn off, and the thing was held together only by my clumsy taping. Magazines of that thin filmy paper weren’t meant to last this long.

Since the fateful 2013 summer day when that glossyfresh publication first graced our family mailbox, I had been desperate to see Blue Velvet. And at long last, at an unquestionably qualified-to-see-films-with-sexualcontent 19-years-old, I was on the verge of fulfilling that fantasy four years in the making.

It was a weeknight and the roads were empty. The few cars that had ventured out were trundling along much, much too slowly, seemingly oblivious to my need for speed. But soon enough, having hurled enough profanity at my steering wheel to rival the saltiest of sailors, I arrived.

The theater was lush, the dim lobby low-ceilinged and draped sensually in a deep burgundy velvet. I had seen movies here before, but never at this hour. Afraid to speak, I walked in reverent silence to my seat.

The movie began, and for the first time in my young life, I watched alone: the seats beside me remained folded upwards, no insolent rear having forced them perpendicular. Distant shadows flickered in my periphery, silhouettes suggestive of couples munching popcorn and whispering in confusion as this strange, strange film unfolded.

“What do they think of me?” I wondered. I wouldn’t go so far as saying that seeing movies solo is a societal taboo, but… I couldn’t shake the suspicion that the audience, conscious of my solitude, was watching me. Watching me watching this film. Watching me watching Kyle MacLachlan’s Jeffrey watching through a closet door Isabella Rossellini’s Dorothy looking tenderly at a photograph of her captive son. This infinite regress was thrilling, in its own voyeuristic sort of way.

But soon I forgot the others and let the film suck me in. And suck me in it did. Into a perverse world of deadly joyrides, of doppelgängers and severed ears, where logic was color and time tripped by only as fast as the jarring Shostakovich-inspired soundtrack. The barrage of image and sound was relentless, pounding against my eyes, my ears, my brain, unceasing…

And suddenly it was over. The house-lights slowly filled the theater with an unreal glow.

The drive home was death-quiet—I had turned the radio off, fearful that an errant chord would harsh the near-sacred ambiance cultivated over the last few hours. The streetlights smeared by, painting my retinas.

“[A]s all cinesexuals know, cinema brings to us the unbearable excesses of the simplest planes within an image,” MacCormack writes, and I cannot help but feel a resonance, echoes of Blue Velvet breaking back into consciousness.

Sitting alone in a movie theater is liberating. There is no need to perform: to laugh when your family laughs, to cry when your friends cry, to feel the obligation of squeezing your boyfriend’s hand as the murderer approaches yet another unwitting victim. Instead, you are called to honesty. To respond to this work of art as you, and no one else. And isn’t this what sex is? Openness to experience, and the vulnerability of being laid bare.

But I love seeing them alone.

So if you’re contemplating asking me out (as is only inevitable), a movie isn’t a bad idea. I won’t say no.

But consider leaving an empty seat in between.