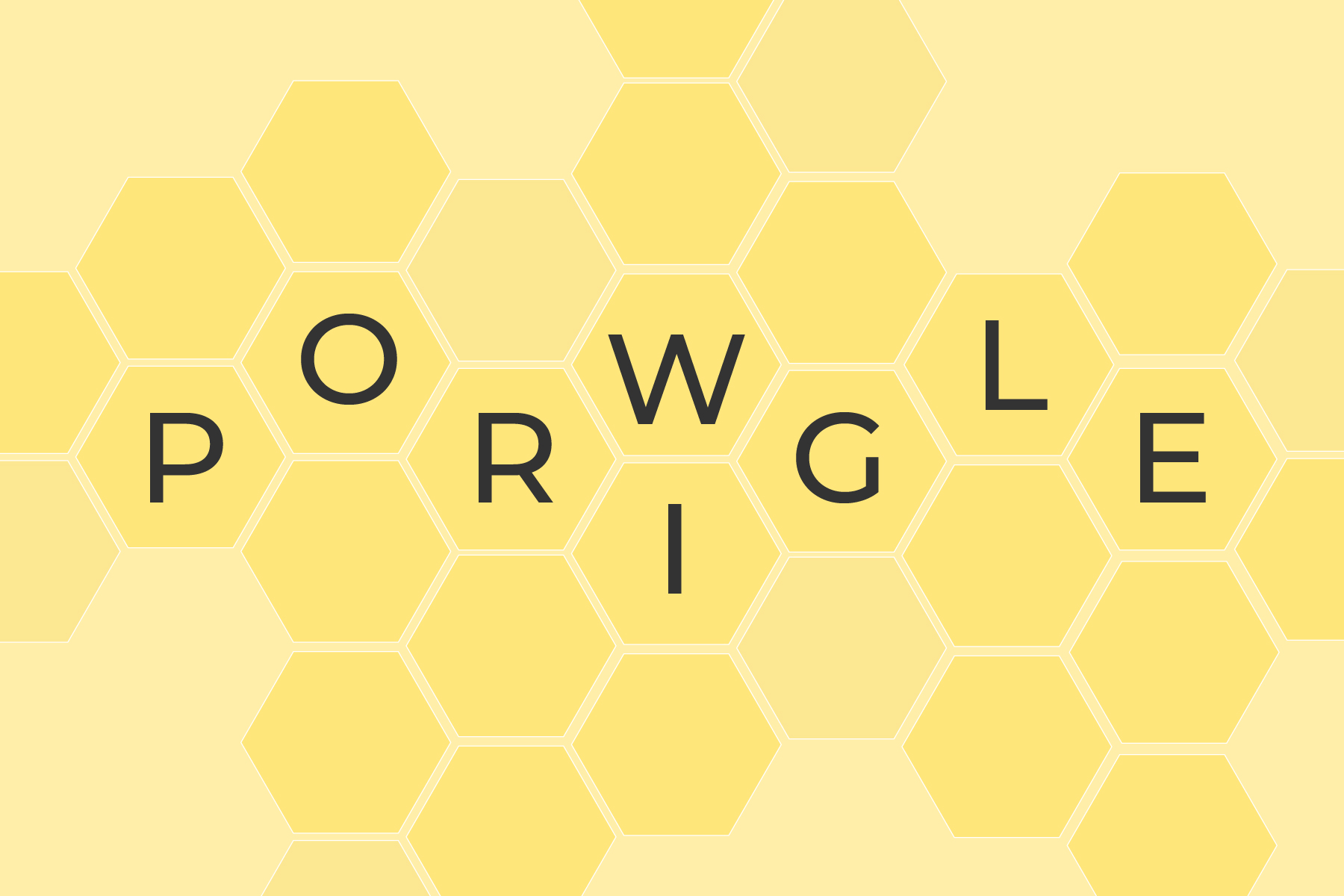 "Four days after the Finals of the Scripps National Spelling Bee, I was running through drills. No, not root-word exercises. Not etymology practice. Football drills."
By Frank M. Cahill

A pause. “Porwigle?” I asked. “May I have the definition please?”

“May I have the language of origin?”

“May I have any alternate pronunciations?”

“There are none, just”—now it’s his turn to pause—“porwigle.” The pronouncer’s enunciation is drawn out, the word round and inscrutable between his lips. Redness (where does it come from?) bathes the stage. The timer ticks down; thirty seconds remain, I think it means to say.

Flashing cameras crouch in front of the stage, their shutters clicking. They sense uncertainty. The hundreds in the auditorium do too, and their hush presses in on me. The work of eleven months is suspended in these final few seconds. I moisten my lips:

A flurry of whistles. “Hey Frankie,” bellowed the head coach as I sprinted, clumsily, for a pass. “I heard you can spell.” The ball toggled from hand to hand, back again, and dropped to the green.

Four days after the Finals of the Scripps National Spelling Bee, I was running through drills. No, not root-word exercises. Not etymology practice. Football drills. As in, running-and-catching-and-hitting-things drills. As in, a complete 180 from the orthographic bliss of just a few days before.

As in, the last thing I’d want to be doing.

The Scripps National Spelling Bee limits participation to students in the eighth grade or under. But this was the summer before my freshman year of high school. Spelling was just a thing I did—a middle-school eccentricity, no?

“There is a time for all things under the sun, and a season for every activity under the heavens” intones Ecclesiastes 3.1 (my high school was Jesuit), and ninth grade was the season for reinvention. Freshman football seemed like a logical first step: nothing like hot, plasticky turf and sweaty jockstraps to fill the vowel-shaped void left by the bee.

From that day on, I was the spelling-bee kid. And I fucking loved it.

I became a mascot of sorts on the football team: the nice-guy teddy-bear offensive tackle who had been on prime-time ESPN…but to spell. It was as though my parents had bought me a FastPass at Disney World, and without any direct effort on my part I was flying up the social ladder. Well…a social ladder. Mine wasn’t the true one, reserved for the charmed few. But my ladder ran parallel, and I was perched at the top. I was the kid everyone loved—never the one you’d invite to a party, but so what? “Awkwardly aloof” was my modus operandi, and (somehow) it worked. Who’d have known that the linguistic skeletons in my closet could so easily substitute for, say, social skills and emotional intelligence and a healthy sense of self?

So, with little incentive to do otherwise, identity-formation was put on hold. I played the humble servant of Christ—“No, no Mrs. X, it wasn’t my best work, but thank you, thank you”—but all the while, I craved the praise. I thrived on it, taking every chance to trot out the endangered beasts in my now-defunct lexicon. My writing became illegibly pretentious. Consider the following, featured in a short story written for my freshman English class:

They discussed their respective societies: their unique solutions to a schismatic societal Kulturkampf long since abolished in both cultures, the lengths at which each leader had gone to in order to halt dégringolade within their now-cohesive communities, and the inevitable eventuality that Götterdӓmmerung would envelop all peoples in its seemingly innocuous retrogressive embrace.

In translation: “I know so many words, and by God, you will know it too.” Q.E.D.

I would like to say I grew out of this habit. That by high-school graduation the crucifixes studding the walls in each and every classroom had stirred in me epiphany, the stuff of a Hollywood sports biopic or a Christian feel-good miracle-flick. But to be good at spelling is to excel at repetition.

“Your word is lozenge.”

I robotically go through the standard questions, all too aware of my friends at the back of the cramped classroom. A few of them have crafted signs for the occasion: billboards reading “STELLAR SPELLER” in striped block letters.

It’s visiting weekend for freshmen parents at Harvard, and my mom is in the audience.

The convergence of this situation is too much.

“Lozenge.” The letters fall out: “L-O-S-E-N-G-E.” Someone rings an absurdly large bell, and benumbed I exit, ousted in the second round and disproportionately devastated.

I understand the logic: it was a tried and true formula. And repetition was an old hat. Based on my sample size of one, it was clear that once again becoming the ‘spelling-bee kid’ would be the key to clawing my way up the Harvard College social ladder. Like many freshmen, I felt lost in the noise, yearning for some kind—any kind— of distinction. It’s still so vivid…the recollections of slyly talking up the intramural spelling bee to my friends, dropping subtle hints about my past and feigning embarrassment when they discovered the videos or read the articles. (To be fair, I was more embarrassed at my own need for validation and readiness to manipulate others in order to obtain it). It was all so silly: a spelling bee thrown by, of all entities, the Freshman Dean’s Office; a room of 20 first-years who, beyond the intramural points at stake, couldn’t care less about the whole affair; an audience of parents and friends dragged along, duly supportive but thinking of the cool, autumn day awaiting them at the event’s conclusion. And then there was me, whose entire world hinged upon the thing.

But being the speller was easy: I preferred to be defined by a single-story.

Even now, thinking back on those days (2012 feels an age away), I’m awash with a sweet nostalgia. I don’t think I have ever loved anything so much as I loved studying for the bee. The marathon cram-sessions with my coach, the dust-laden pages of my Schnauzer-sized dictionary, the thousands and thousands of words, in all their whimsy, their mysterious and lovely variety.

Even the 20-plus hours spent most weekends in a cubicle at my dad’s office, studying anything from Sanskrit spelling patterns to words for cheese (of which there are shockingly many). I even gained 60 lbs in the process (a simple outcome, really: quitting sports for a year to study + stress-eating whilst enacting said studying = dramatic weight gain), but it was worth even that.

Even now I miss it. The drafty convention centers and the cutthroat competitiveness. The joy of victory and the ever-present imminence of loss. The thrill of academic success in high school and the disbelief of admission to Harvard—these have in no way compared to that raw sense of success I merited at the bee. Spelling sparked an epic love affair with language, a lavish romance beginning with Latin that is still honeymooning today.

“The art of losing isn’t hard to master,” American poet Elizabeth Bishop chants, though I don’t believe it. Regardless, through loss after loss—the “seemingly innocuous retrogressive embrace” of an unwilled “dégringolade”—we persevere. Even the villanelle, so bent on repetition, after 19 lines must end.

Even a tadpole must metamorphose: watch the gentle nubs of translucent arms and legs poke out and the tail absorb into the body, the mouth widen and the head change shape. See the gills fail. See the frog’s first gasping breath at the water’s surface.