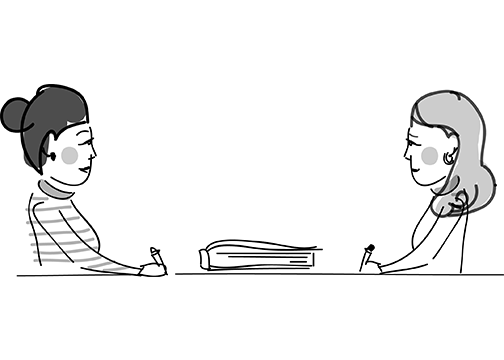 Here is my thesis: Gerty MacDowell and her friends do not hold hands. They do not hug. They do much more. Flashing signals like lighthouses.
By Eva K. Rosenfeld

Gerty MacDowell and her friends do not hold hands like regular people with emotional depth. Instead, they have “ten fingers locked.” We are discussing “Ulysses” in my humanities seminar, and a girl is pointing out the emptiness with which James Joyce paints his women. Sitting on the rocky beach with the lighthouse in the distance, she says, Gerty and her friends don’t embrace; they simply put their “arms round each other’s necks.” Their actions are mechanical and meaningless. Not smiling, but showing their teeth at one another.

After this digression, our conversation returns to the brilliance of Joyce, and I am flipping through the mental Rolodex I’ve been keeping—titled, “The History Of Western Literature And Also Everything Else As Told To Me By Boys In My Hum 10 Seminar.” In particular, I think of one boy who decried Jane Austen’s Emma with vitriol, and added as an afterthought: “Emma is the worst character we’ve read this semester.” We’d read The History of the Conquest of New Spain, for God’s sake! We’d read Inferno! Ugolino literally ate his own sons!

The likeable protagonist is a funny thing. Jenny Zhang writes on Gunter Grass’s famous The Tin Drum protagonist, Oskar, “We root for him. He’s so damaged and so lovable.”

“I know I am not the first woman to ask this,” she continues, “But how can I be both damaged and loveable? How do I become the protagonist of a story?”

Virginia Woolf, Joyce’s modernist contemporary, once refers to him in her diary as “a queasy undergraduate scratching his pimples.” But her distaste carries an undertone of envy. One can imagine the bruised resignation with which she adds on another date, “What I’m doing is probably being better done by Mr. Joyce.”

In A Room of One’s Own, Woolf mourns, if nothing else, lost time. Time lost to women in years of work, or years of intellectual freedom. This comes up in seminar, and a new aura of melancholy settles into the room. There is a current of resentment in reading this fat, shining object of intellectual freedom that doesn’t sit well with me or the rest of the class’s female contingent. We huddle at the end of class to nod and murmur.

Our professor, a woman, joins the cluster. She asks us if we feel inhibited in our work. We nod. “It’s difficult, I know,” she says. “You have to to fight to get there. Do you think you will get there?” Maybe, we respond, but we won’t get so far as we would have if we’d never had to spend that time fighting to begin with. She laughs and we laugh because our words are vague and amorphous, and we are saying very little, yet we are saying a lot. She says, “I know that we are speaking in very abstract terms, but I do think we all understand one another. And I do think the fighting makes you stronger, in the end.”

Which is why I’ve come to resent that every canonical work by a woman is, at some point in class, referred to as an act of catharsis. I’m not even sure I believe in catharsis anymore—at least not as Aristotle would have it; to wash away the passions at the end of the tragedy. This sounds like a ploy, if you ask me, to rob people of their tragedies after the fact. This is very clever. If no one has anything to gain or create from their strife, if strife is something to be sanitized under the bubbly sponge of catharsis, then the fighting does not make you stronger. If there’s no value in the process of fighting to offset the tragedy, then the strifeless keep their lead. Clever.

I’ve heard that dialects can be distinguished not by their differing vocabularies but by in their signals and noise. Words that are buried in the noise in one dialect might act as a blaring signal in another. I imagine a system of signals among women, except I think it goes further than words and extends into the wordless. Sometimes you just need fewer words when trying to explain something to another woman. Sometimes you can just make eye contact across the seminar table and know.

A few nights later I am at the Girlpool concert at the Paradise Rock Club. I run into a friend who dances alongside me, and she swears to God when she touches my shoulder blades a part of my soul goes into her. The next day she swears to God that, in her dream, the boy who’s been bothering me this week bothered her, too, except she thought it happened in real life for a moment, like she took this encounter out of me wordlessly.

Here is my thesis: Gerty MacDowell and her friends do not hold hands. They do not hug. They do much more. Flashing signals like lighthouses.

— Magazine writer Eva K. Rosenfeld can be reached at eva.rosenfeld@thecrimson.com. Follow her on Twitter @EvaKRosenfeld. This is the second installment of her column, The Girls Want To Be With The Girls, which explores female communities on campus.