The Fox Club Changed Its Mind About Going Gender-Neutral — Again 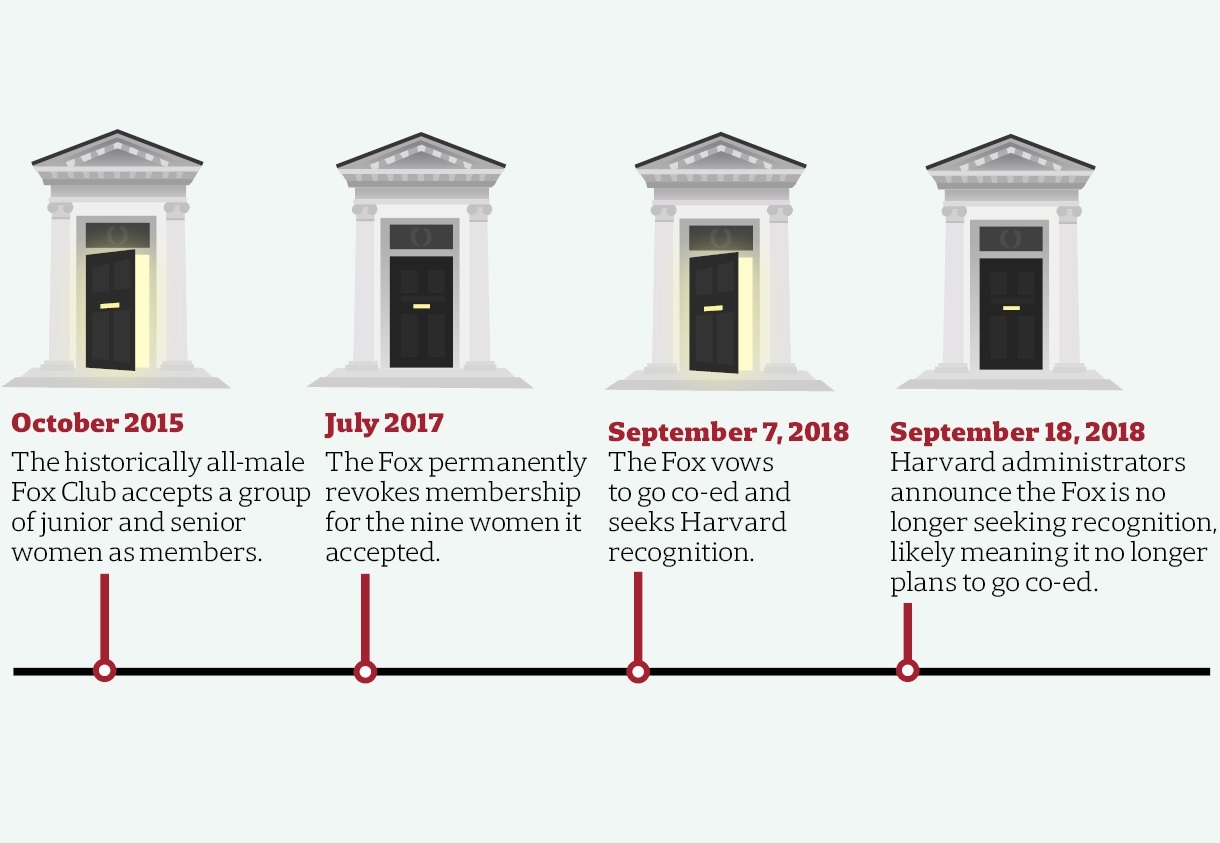 The Fox Club seems unable to decide whether it wants to accept women or not.

The historically all-male, 120-year-old social group — which earlier this month vowed to go co-ed and in return earned College recognition — is no longer planning to do so, according to administrators. Harvard on Tuesday removed the club from a list of recognized social groups it maintains on its website.

The about-face means the Fox likely no longer intends to admit people of all genders — and that the club is once again subject to the College’s sanctions. Recognized social groups must either adopt gender-neutral membership practices or commit to going gender-neutral at some point down the road. In exchange, they receive freedom from Harvard’s social group penalties as well as perks including access to University spaces — and, if they’re especially well-behaved, wads of College cash.

Harvard’s sanctions — which took effect with the Class of 2021 — bar members of single-gender final clubs and Greek organizations from holding student group leadership positions, serving as captains of varsity athletic teams, and from receiving College endorsement for prestigious fellowships like the Rhodes.

The Fox’s U-turn this week marks the second time the group has flirted with going gender-neutral. In 2015, undergraduate members of the club voted to accept nine junior and senior women, prompting displeasure from its graduate board — and at one point spurring the alumni body to shut down the Fox’s clubhouse on JFK St.

But it didn’t last. In July 2017, the Fox’s graduate board permanently revoked membership for the nine women. In total, the women continued as members of the Fox for roughly a year and a half.

This time around, the Fox’s co-ed intentions were even shorter-lived — made public for only 11 days.

Harvard spokesperson Aaron M. Goldman did not specify when the Fox notified the College that it no longer plans to pursue recognition, but he wrote in an email that the change officially took effect Tuesday.

“You can say it is effective today,” Goldman wrote in an email.

The Fox was originally one of 15 social groups — including formerly all-male final clubs the Delphic and the Spee — that promised to renounce their single-gender status in exchange for College recognition and freedom from the sanctions over the summer. Administrators finalized and published the list of 15 on Sept. 7.

That round of recognition left Harvard without women-only social groups.

The Fox’s reversal may mean its graduate board can breathe a sigh of relief. Harvard appears to be targeting recognized social groups’ traditional governance structures — administrators have said they will revoke recognition for groups whose alumni boards exert undue influence over undergraduate members.

As part of its brief bid for recognition, the Fox received an “action plan” from College administrators outlining recommended next steps meant to help the group achieve greater gender inclusion, Miller said earlier this month.

Goldman declined to comment on contents of the “action plan” given to the Fox.

In renouncing Harvard recognition, the Fox edges closer to the handful of social groups that continue to defy the College’s sanctions. Three fraternities and three all-male final clubs — the A.D., the Porcellian, and the Fly Club — have taken the fight to Capitol Hill, where they are lobbying Congress in a bid to cancel the penalties.