Prior to a 1984 split, final clubs affiliated with Harvard could count on use of the school's telephone line, discounted steam heating, and little oversight. Today — for the three newly recognized clubs — things will work a little differently.
By Caroline S. Engelmayer and Michael E. Xie 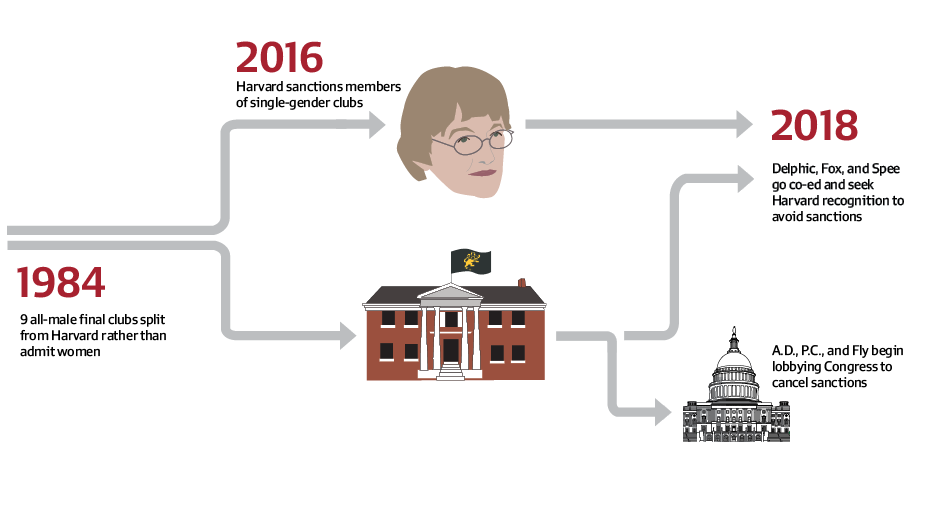 It’s been a long time since Harvard was in any way affiliated with the historically all-male final clubs that surround its campus.

The clubs — at the time, there were nine — severed ties with the University in 1984 after administrators delivered an ultimatum: admit women as members or part ways with Harvard.

“These clubs must come to terms with the changing role of women in society and learn to associate with them in college as associates and colleagues, and not merely as romantic and sexual partners,” then-Dean of Students Archie C. Epps III said in Oct. 1984, according to the New York Times.

Nearly 40 years later, history is in some ways repeating itself.

Harvard announced sanctions on members of unrecognized single-gender social organizations in May 2016. The penalties — which took effect with the Class of 2021 — bar members of these groups from holding campus leadership positions, varsity athletic team captancies, and from receiving College endorsement for prestigious fellowships like the Rhodes.

But this time around, some all-male final clubs are proving less defiant.

The Spee, the Fox, and the Delphic — all three among the original nine that split from Harvard in the eighties — recently promised to surrender their single-gender status in exchange for official Harvard recognition and freedom from the College’s sanctions.

The 2018 relationship between these clubs and the University promises to differ substantially from the one that existed 40 years ago. Prior to 1984, Harvard did not formally recognize the final clubs and did not seriously intervene in their membership policies — but did grant them perks including use of the school’s private phone line and a discount on steam heating.

Today, Harvard is significantly more hands-on. Administrators require recognized clubs to submit demographic breakdowns of their membership, offer up governing documents, and prove their alumni boards are not exerting undue influence over undergraduate members. (And there’s been no public mention of discounted heating.)

“The new protocols, from what I understand of them from the Crimson, bear little similarity to the old ones, which were simple in the extreme,” former Dean of the College Harry R. Lewis ’68 wrote in an email.

Richard T. Porteus Jr. ’78, the graduate president of the Fly Club — which, in lieu of admitting women, is taking the fight against the sanctions to Capitol Hill — put it a little more bluntly.

Harvard’s new approach, he said, could be termed “in loco helicopter parentis.”

PERKS AND A PARKING SPACE

Thomas A. Dingman ’67, who served as Harvard’s dean of freshmen for over a decade before he retired last spring, still remembers his days as an undergraduate member of the Delphic.

Back then — in the late sixties — the living was easy, Dingman said.

“The College had very little involvement in the final clubs when I was an undergraduate,” Dingman said. “They had their own real estate, they had graduate boards, they were largely self-contained communities.”

Despite their lack of official Harvard recognition, the clubs benefited from privileges typically offered only to groups that maintained a formal relationship with the College.

Harvard allowed the final clubs to hold events in some University-owned spaces and to make calls on the school’s Centrex telephone system, according to the New York Times. Other perks included access to the school’s private alumni address book and free guidance from Harvard University Police Department officers on security.

Nearly all clubs purchased steam to heat their mansion clubhouses at a reduced price from Harvard Building and Grounds. The groups paid over 10 percent less than the going rate in Cambridge.

“Although they are private, in many ways they are treated as if they were a recognized student organization at Harvard,” Epps told The Crimson in 1983.

The ties between the clubs and the University extended to the literal ground underneath members’ feet.

Harvard at one point owned a plot of land in the Fly Club’s garden, on which it paid taxes. And administrators granted the Delphic Club a coveted parking spot in Apley Court. The 19 other spaces in the lot belonged to high-ranking administrators.

Epps did exert some control over club affairs, helping oversee the groups’ punch every fall — the process by which final clubs have historically selected and inducted their members. A formal agreement signed by all nine clubs stated Epps should “call” and act as chairman of meetings held between the clubs’ undergraduate presidents.

But Epps told The Crimson in 1983 that he was never a major player in club affairs.

“I guess I would be a resource person, and if a problem arose, I would be there to mediate it,” he said, adding that he attended the meetings not out of a desire to help the clubs, but because he wanted to guard the interests of College students.

Porteus said he thinks Harvard administrators mostly stayed out of the way because, at the time, the clubs restricted their social events to members.

“The clubs in the seventies were primarily members-only and, as their memberships have diversified to accommodate the increasing diversity of Harvard, they've also — many or most — experimented with different kinds of guest policies,” Porteus said.

Dingman remembered it the same way.

“There was very little opening of doors to accommodate large numbers of undergrads,” he said.

Nowadays, final clubs often hold large and sometimes raucous parties on Friday and Saturday evenings. When administrators debuted the sanctions, they initially cited sexual assault at alcohol-fueled club events as a justification for the penalties — though they've since backed away from that rationale, shifting their reasoning at least twice.

NOT THE SIXTIES ANYMORE

In 2018, Harvard is once again offering final clubs certain perks.

But — unlike in the past — they come with serious strings attached. Harvard last semester designed and unveiled a complex, three-tiered system of recognition that heaps escalating benefits on clubs that demonstrate greater compliance with administrative directives and priorities.

All social groups must submit their governing documents and anonymous gender breakdowns of their membership to the College in order to be considered for the lowest level of recognition, “Interim Recognition,” which confers freedom from the sanctions for at least one year.

The two higher levels —  “Full Recognition” and “Recognition with Distinction” — sweeten the bargain by offering clubs unspecified amounts of Harvard cash. In return, groups must commit to total non-discrimination in their membership policies.

And administrators appear to be targeting some groups’ powerful graduate boards. The College has stated it will deny recognition to clubs whose alumni bodies wield undue clout in the groups’ day-to-day operations.

In a recent interview, Associate Dean of Student Engagement Alexander R. Miller declined to specify what inappropriate graduate board influence might look like, but said generally that Harvard will weigh the amount of financial control exerted by alumni.

Today’s level of administrative involvement in club matters might have surprised John B. Fox Jr. ’59, who served as dean of the College around the time administrators first ordered the nine clubs to go co-ed. In interviews with The Crimson, Fox indicated he viewed the groups as rightfully separate from Harvard.

“It has not been my view that these clubs are in any way a part of the range of opportunities provided by the College, and I do not believe it is appropriate for me to speak out,” Fox told The Crimson in 1983. “I don’t often comment on the decisions students make in their private lives.”

Still, Fox was likely more active in club affairs than his 2018 administrative counterparts in at least one way. In 1983, he was invited to the Porcellian Club’s annual spring bash — an invitation he accepted.

“I was invited by an undergraduate, not by the club,” he told The Crimson at the time. “I try to respond to invitations by undergraduates.”