Harvard’s brand-new graduate student union inched towards the bargaining table earlier this semester when it published a list of goals for its inaugural round of negotiations with administrators. There are 80 goals in total.
By Shera S. Avi-Yonah and Molly C. McCafferty 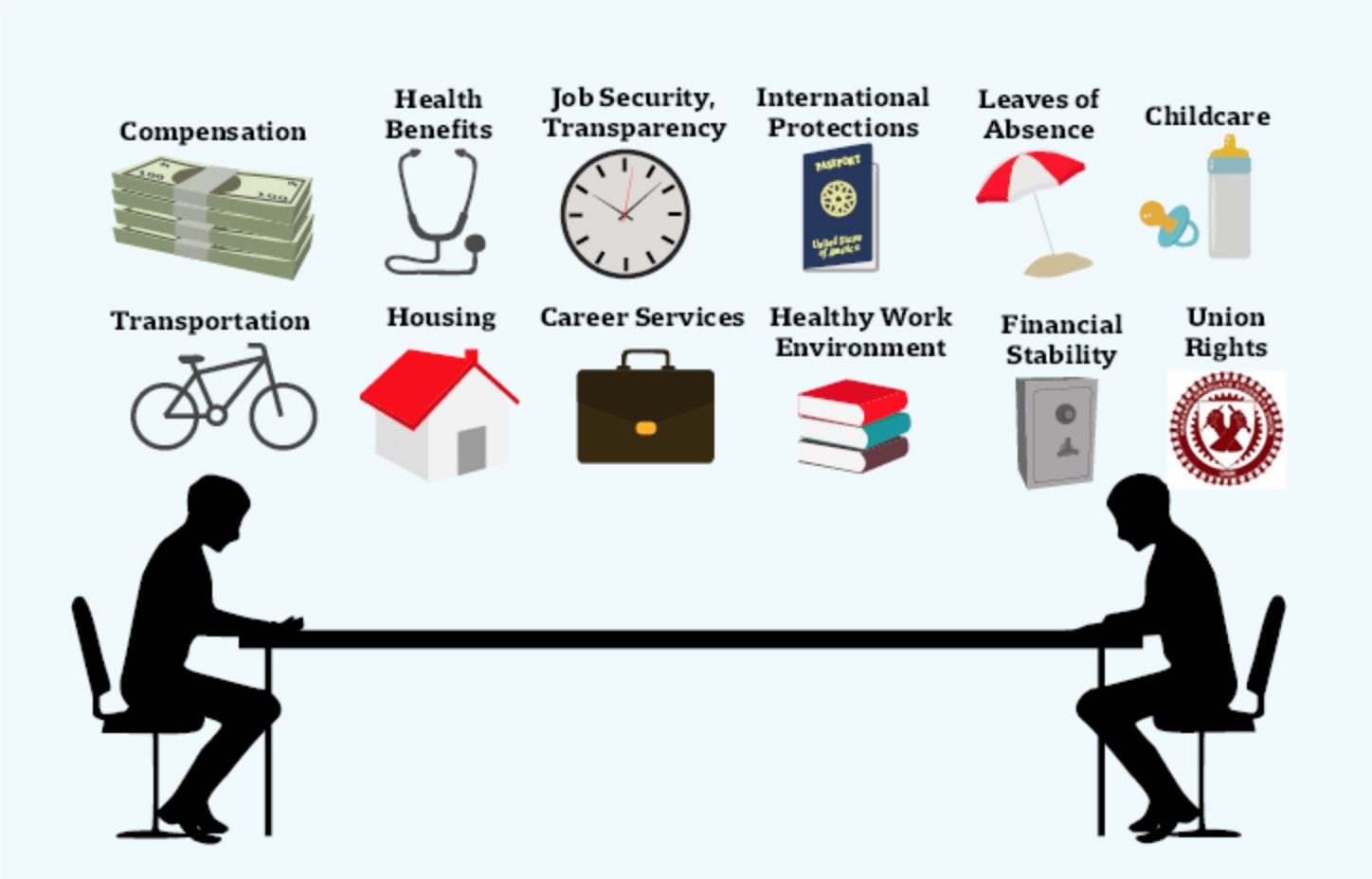 Harvard’s brand-new graduate student union inched towards the bargaining table earlier this semester when it published a list of bargaining goals for its inaugural round of negotiations with administrators.

The goals — which come from a survey distributed to members this summer — address a wide set of issues, ranging from wage increases to visa protections. Harvard Graduate Students Union-United Automobile Workers’s 13-member bargaining committee generated the 80-point list based on 1,600 responses to a survey it sent out to members this fall. The final list has nearly twice as many goals as those listed on the bargaining survey.

Before they begin pushing for a contract that reflects the goals, HGSU-UAW’s membership at large will vote on the list. Evan C. MacKay ’19, who represents undergraduates on the bargaining committee, wrote in an email that the vote will conclude “soon.” After rank-and-file sign off on the goals, negotiators say they will likely begin formal contract negotiations with Harvard before the semester is over.

Central to the union’s lengthy list of goals is the issue of compensation for student employees. Bargaining committee members hope to increase minimum pay rates, guarantee annual pay increases “that keep pace with local cost-of-living,” and streamline the payroll process, among other topics.

Wages have served as a rallying point for graduate students arguing for the necessity of a union. In 2017, as the Graduate School of Arts and Sciences faced financial pressure, Harvard announced lower-than-usual increases to Ph.D. students’ stipends coupled with normal increases to housing fees.

Though stipend increases have since returned to normal rates, HGSU-UAW organizers argued that the union could secure greater stipend and housing stability from year to year. The slate of bargaining goals includes several aimed at regulating the University’s financial support for students.

Most notably, the union proposes that the University waive all tuition and fees for teaching and research assistants. While doctoral degree students at GSAS are all guaranteed tuition deductions through grants from the University, students in masters’ programs and at other Harvard schools may not have the same level of support.

Regardless of whether they receive University stipends, any graduate student has the option to apply for University-owned housing. Union negotiators plan to call for rent reductions overall, as well as changes to the way rent increases are set year-to-year.

Currently, an external contractor analyzes sources such as off-campus rentals provided by Harvard University Housing and non-Harvard rental websites in order to gauge prices at competing apartment complexes in Cambridge, Boston, and Somerville. The contractor then generates rent levels for the approximately 3,000 University-owned apartments.

In addition to compensation and housing, the union’s bargaining committee also plans to advocate for the institution of a sizable number of health benefits for teaching and research assistants. These include paid medical, dental, and vision insurance for all student employees and their dependents; an expanded list of covered medications; and a guarantee that University Health Services responds to “health and mental health emergencies, without unnecessarily turning to law enforcement.”

Union membership includes both undergraduate and graduate teaching and research assistants. The goals include several items aimed at regulating students’ workloads, both in the lab and the classroom. HGSU-UAW plans to call for increased regulation of job postings, hours, and payroll.

The Faculty of Arts and Sciences is currently mulling proposals to end “shopping week,” a one-week period at the beginning of the semester when students can walk in and out of classes before officially enrolling.

In past semesters, shopping week has created headaches for graduate students seeking to secure teaching positions, since College classes add and drop teaching fellows based on fluctuating class sizes. Though many of the goals suggest streamlining this process, MacKay wrote that HGSU-UAW has no official position on shopping week.

Once they begin negotiations, the bargaining committee will also seek contract measures addressing students’ life outside research and teaching obligations. Much of HGSU-UAW’s work over the past several months has concerned issues of diversity, international student protections, and sexual harassment.

This second set of goals relates to the work of several of HGSU-UAW’s subcommittees, including the “Time’s Up” committee, Civil and Human Rights committee, and International Student Working Group.

Per the bargaining goals, the union will seek to “establish the right to expedited, neutral and procedurally fair, third-party grievance procedure for discrimination, harassment, and other complaints.” MacKay wrote that the United Automobile Workers will likely be a party in any outside grievance procedures, though he added that the details of those procedures would also be a part of negotiations with administrators.

“Based on the experience at other universities, most grievances get resolved quickly and informally,” he wrote. “If a grievance goes all the way to arbitration, it is likely that a UAW representative would help do the arbitration hearing and arguments.”

The bargaining committee also proposed several protections for international students in the bargaining unit. In doing so, committee members drew from the work of one of its longest-standing branches, the International Scholars Working Group.

The ISWG began advocating for international grad students even before HGSU-UAW was formally authorized. After a travel ban placed on certain countries prevented several Harvard affiliates from entering the United States in Jan. 2017, the group advocated for the creation of a hotline to advise students affected by the policy.

Among other things, the bargaining committee aims to provide free legal assistance to international student employees with visa and immigration issues; guarantee access to free English language classes; and protect the benefits and pay of student employees who “encounter visa problems or are targeted by discriminatory state or federal policies.”

If they are included in the contract between HGSU-UAW and Harvard, the final set of goals would further establish the union’s presence on campus. For example, HGSU-UAW would gain access to University facilities and union representatives would be compensated for their time doing union-related advocacy.

Ultimately, MacKay said the overarching objective of the bargaining goals is to “improve economic and other conditions” for student employees and “make Harvard a more accessible and inclusive community.”

A previous version of this article misstated the timing of Harvard's graduate student union's release of its bargaining goals. It has been updated.