Five Things You Need to Know About the Harvard Admissions Lawsuit

The case is set to go to trial on Oct. 15 in a Boston courthouse. A lot happened over the summer — so read up on the five major developments you need to know before the school year starts.
By Delano R. Franklin and Samuel W. Zwickel 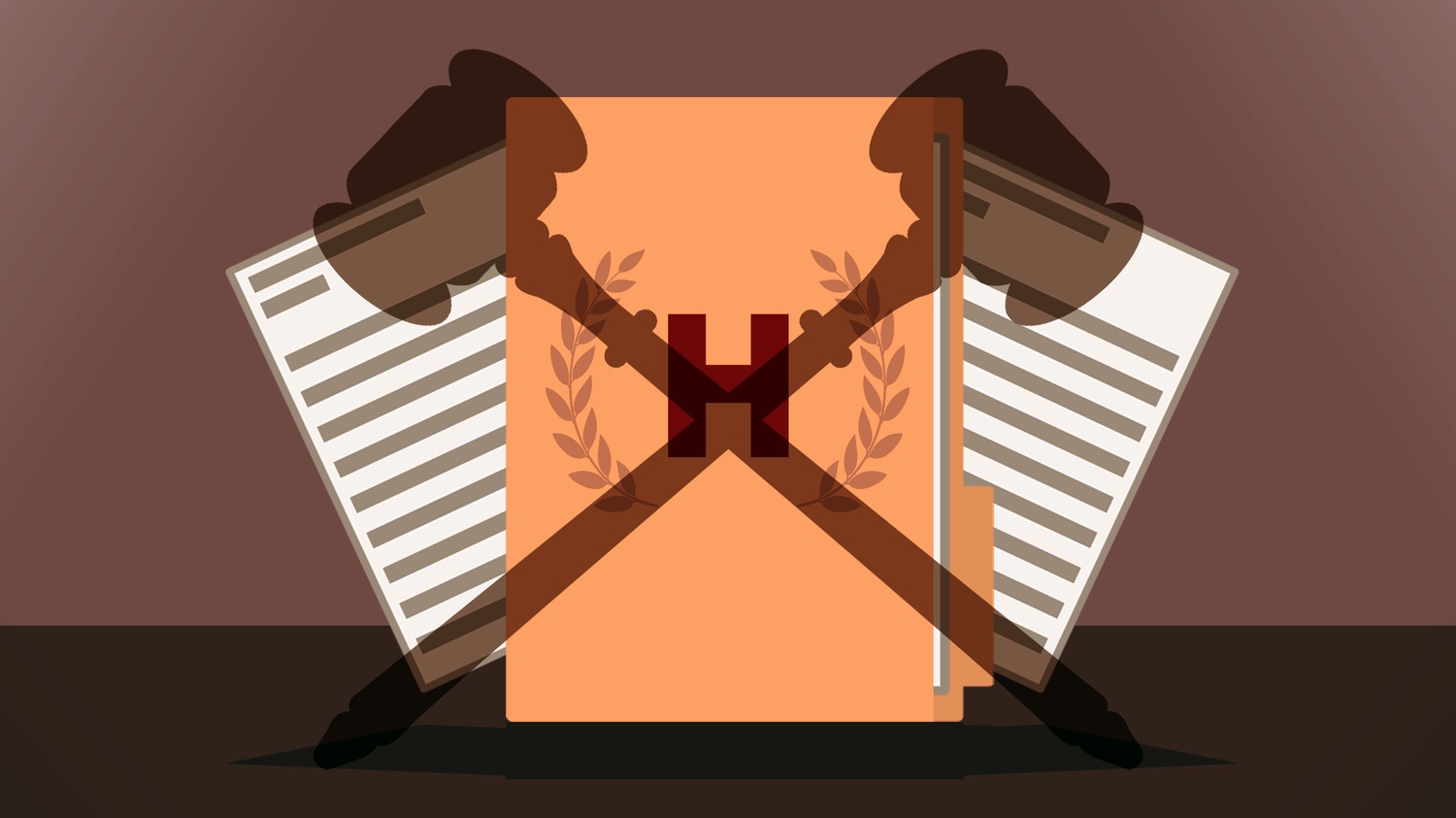 As eager freshmen meander about Harvard Yard and President Lawrence S. Bacow settles into his new office, Harvard — and its lawyers — are getting ready to head to federal court.

The University is battling a four-year-old lawsuit brought by anti-affirmative action group Students for Fair Admissions that alleges the College discriminates against Asian-Americans in its admissions process. Harvard has repeatedly denied SFFA’s charges, arguing that it must consider race in order to forge a diverse student body and fulfill its educational mission.

The lawsuit heated up along with the summer’s searing temperatures. In June and July, Harvard was forced to publish hundreds of pages of internal documents related to its admissions process as part of the suit. Many revealed the inner workings of the College’s notoriously secretive admissions office, prompting national headlines. The drama wasn't over, though; just last week, the Justice Department sent shockwaves across the country when it intervened forcefully on the side of the plaintiff and publicly accused Harvard of racial discrimination.

The case is set to go to trial on Oct. 15 in a Boston courthouse. A lot happened over the summer — so read up on the five major developments you need to know before the school year starts.

The Trump Administration Takes a Stand Against Harvard

The federal government appears to have picked a side — and it’s not Harvard’s.

The United States Department of Justice filed a scorching ”statement of interest” in the case last week that accused Harvard of committing “unlawful racial discrimination” and asserted its candidate evaluation process is “infected with racial bias.” The department had signaled before that it was sympathetic to SFFA; but Thursday’s memo marked its strongest intervention to date.

Department lawyers wrote in the court filing that evidence that bubbled up over the summer supports SFFA’s accusations. Attorneys justified the Justice Department’s interference by pointing to the fact that Harvard receives significant federal funding. Taxpayer dollars must not “serve to finance the evil of private prejudice,” the lawyers wrote.

Legal experts say the timing of the department’s filing is unusual and means the federal government may sue the University for its admissions policies. The department is already conducting a separate probe — overseen by top department officials — into whether Harvard discriminates against Asian-American applicants. Department lawyers have reviewed confidential student records as part of that inquiry.

But the Trump administration is looking beyond Cambridge in its efforts to roll back affirmative action. The federal government in early July authored a “Dear Colleague” letter notifying university administrators that it had withdrawn Obama-era recommendations promoting the consideration of race in college admissions.

A 2013 internal Harvard review that came to light over the summer shows that the University at one point concluded the same thing.

A June 15 court filing revealed that Harvard’s internal research office produced a top-secret series of reports several years ago that found the College’s admissions policies produce “negative effects” for Asian Americans. One report noted Asian Americans received consistently lower scores for their personal traits — things like “humor” and “grit” — than did applicants of other races. The University has disputed the claim that its evaluation of applicants is discriminatory.

Harvard’s research office presented its findings to senior officials including Dean of the College Rakesh Khurana and Dean of Admissions and Financial Aid William R. Fitzsimmons ’67. But the report was never made public and top administrators did not take any significant action to address the issue.

In court filings over the summer, Harvard officials and lawyers argued the 2013 research was incomplete and not meant to uncover possible discrimination.

Harvard Forced to Reveal Secrets of its Admissions Process

The internal Harvard reports are one of many secrets the lawsuit has unearthed.

Other details that sprang from documents released over the summer include tidbits about the so-called “Z-list,” a small pool of students whose offers of admission Harvard defers for a year. Court filings showed that students who receive spots on the Z-list are overwhelmingly white and that almost half them are legacies, meaning at least one of their parents attended Harvard.

Documents also revealed that recruited athletes see relatively high rates of admission compared to non-athletes. Of athletes with high academic scores, 83 percent earned admission, while only 16 percent of non-athletes with top-tier academic ratings did so.

Other filings uncovered the fact that Harvard specifically trains its admissions officers on how to weigh race in the admissions process.

The disclosure of these details comes amid a months-long dispute over which admissions documents and applicant data should remain confidential. Harvard has fought to file information under seal, meaning only parties to the suit could see it. But a federal judge ultimately ruled that many documents — ranging from statistical analyses to admissions officers’ emails — must become public.

If the suit goes to trial in October — which experts have said is all but certain — thousands of additional pages of student records could enter the public domain.

The Trial and the Future of Affirmative Action

Harvard and SFFA have one thing in common: both want to prevent a trial.

Lawyers for the two parties have asserted that the facts of the case are so clearly in support of their respective arguments that Judge Allison D. Burroughs, who is presiding over the case, should rule on some or all of the charges without allowing the lawsuit to proceed to a full trial.

On June 15, each party filed briefs — comprising hundreds of pages of expert statistical analyses and depositions from top Harvard administrators like former University President Drew G. Faust and Khurana — that argued for dismissal. Over the next several months, Harvard and SFFA rebutted each other’s arguments and gave their versions of the “undisputed facts” of the case.

As recently as last week, the parties continued to skirmish over the issue. Harvard, in a last-ditch effort to avoid a trial, tried to argue that the SFFA lacks legitimate standing to sue.

Despite all of this, legal experts — as well as the judge herself — say a summary judgement is highly unlikely. The trial, slated to be held in the U.S. District Court in Boston, is expected to take place — and to last for several weeks.

Some say the case is destined for the Supreme Court. If it reaches the Court — and if nominee Brett M. Kavanaugh wins a seat on that Court — the decision could end affirmative action in the United States.

As they spar in federal court, Harvard and SFFA have at times benefited from the the help of outside allies.

Numerous third parties have filed amicus or “friend-of-the-court” briefs in favor of one side or the other. The Department of Justice is the most notable name to throw its weight behind SFFA so far, though lesser-known individuals and organizations have also come to their aid.

The Asian American Coalition for Education filed an amicus brief supporting SFFA on behalf of 156 Asian American organizations in July. Five economists, as well as conservative think tanks like the National Association of Scholars, filed in support of the plaintiff around the same time.

Higher education appears to have listened to Harvard’s call. Sixteen top American universities — including every member of the Ivy League — filed a joint brief defending the University’s race-conscious admissions in July. Last week, Harvard students spoke out in favor of affirmative action when 25 campus student groups — including 10 Asian or Asian-American interest groups — filed a joint brief with the help of lawyers from the NAACP Legal Defense and Educational Fund.

The American Civil Liberties Union also filed a brief arguing for Harvard over the summer, as did 15 economists and 531 social scientists.