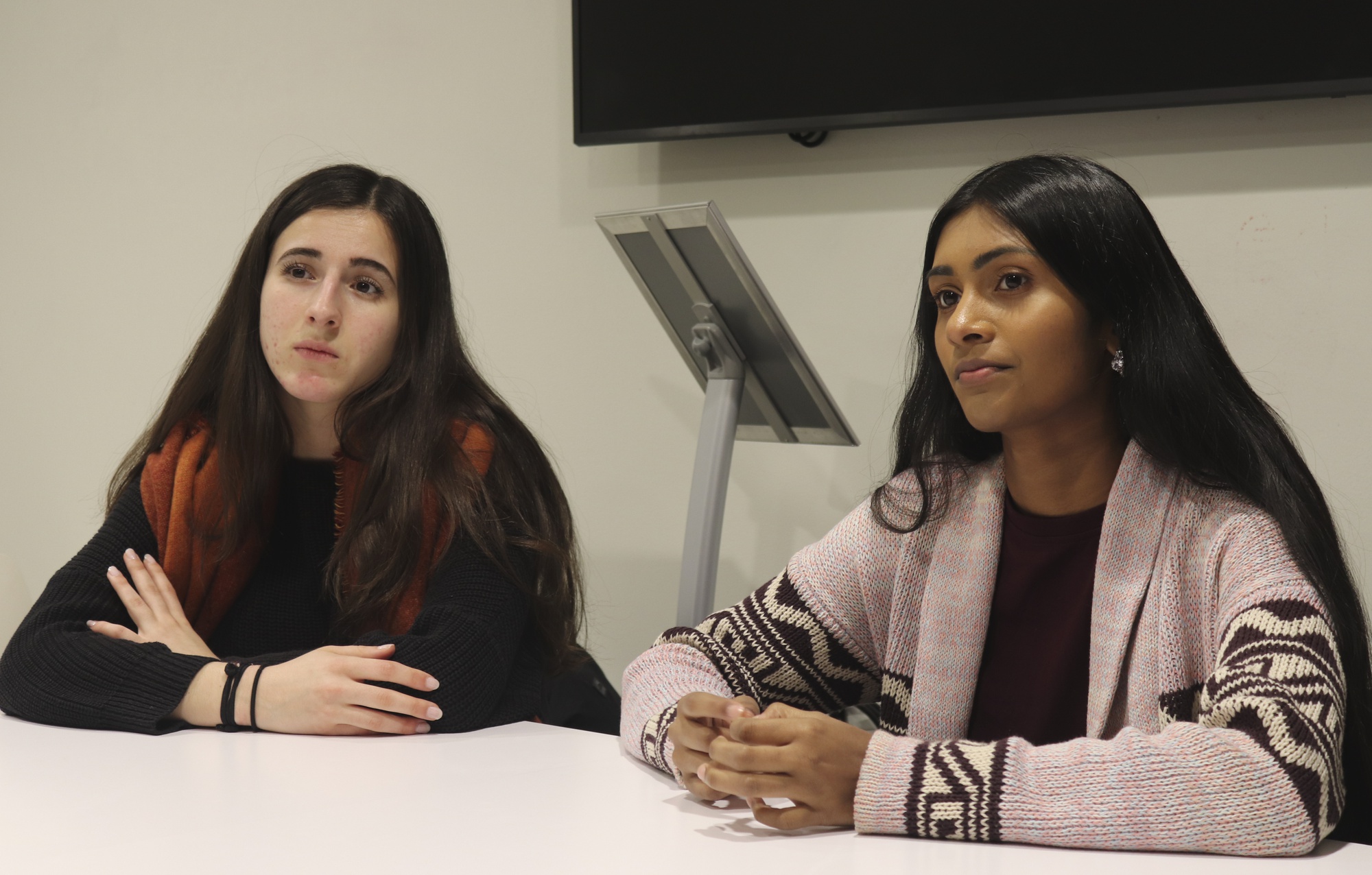 Sruthi Palaniappan ’20 and Julia M. Huesa ’20, President and Vice President of the Undergraduate Council, sat down with The Crimson to talk about their plans for the upcoming year as they begin their tenure.
By Kevin R. Chen and Laura C. Espinoza, Crimson Staff Writers 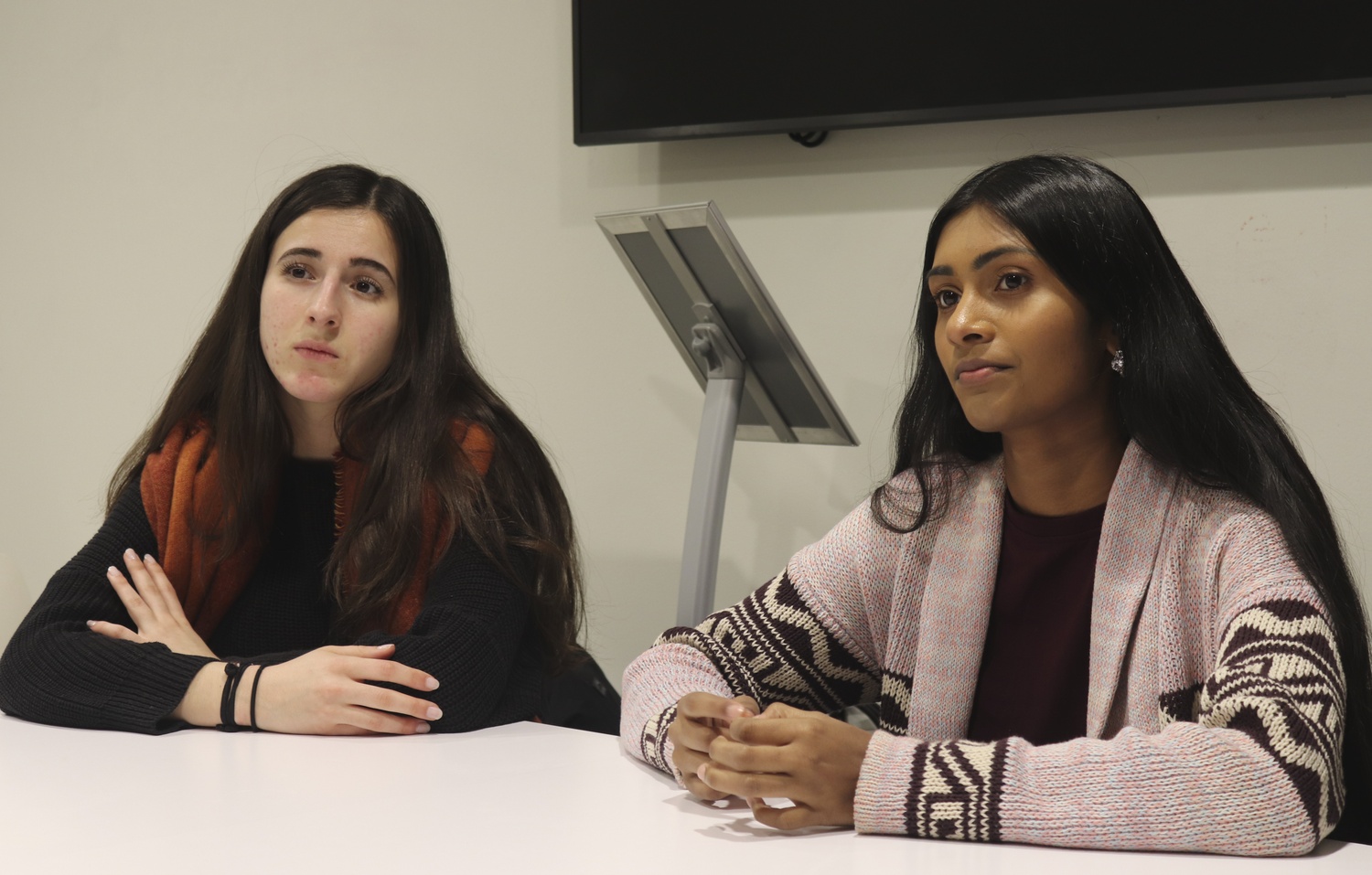 Sruthi Palaniappan ’20 and Julia M. Huesa ’20, President and Vice President of the Undergraduate Council, sat down with The Crimson to talk about their plans for the upcoming year as they begin their tenure. By Kathryn S. Kuhar

Undergraduate Council President Sruthi Palaniappan ’20 and Vice President Julia M. Huesa ’20 said they plan to restructure the Council's committee system this year, a move that would require changing its bylaws.

UC committees largely decide how projects are assigned and completed. Palaniappan and Huesa’s proposal reevaluates which committees exist, as well as their purposes and goals. They will propose this effort at the first general UC meeting of the year on Sunday.

“There are several elements we’re tackling, some of which have been kind of ingrained in the Constitution since the UC was created over 40 years ago,” Palaniappan said. “These are pretty significant changes that could occur if we are able to get this proposal passed through the Council.”

Over winter break, Palaniappan and Huesa worked on assembling their executive cabinet, which includes some 14 “project managers” who will work on initiatives assigned by the duo, according to Palaniappan. Former UC President Catherine L. Zhang '19 and Vice President Nicholas D. Boucher '19 were the first to appoint an executive cabinet for the UC.

“Laying that groundwork over the past month is going to set us up to be super effective throughout the course of the coming semester and coming year, so we are excited about the individuals who will be serving in those roles,” Palaniappan said.

Palaniappan and Huesa said they will also prioritize working to retain shopping week during their tenure on the Council. Shopping week allows students to attend courses before formally enrolling at the beginning of each semester. In recent months, the College administration formed a committee to explore alternative options to shopping week, a decision which received pushback from the student body.

Palaniappan said she believes the student response to the Council’s shopping week survey, which garnered over 1,800 student responses, signaled its importance to the Office of Undergraduate Education.

“It’s probably the topic that students most care about on campus right now, especially with all of the discussions that the Office of Undergraduate Education held in the past semester,” Palaniappan said.

The duo said they were cognizant of many students’ frustration with the Council in recent years, something they hope to remedy this year.

“This issue that we saw come up persistently from students during our campaign season, as well, was that a lot of students are dissatisfied with the way that the UC works,” Huesa said. “I think, to an extent, we are also dissatisfied.”

Palaniappan and Heusa said they also plan to appoint a “Director of Belonging and Inclusion,” a new position on the Council, to advocate for underrepresented communities on campus.

“We want to really be intentional about the way that we’re including them into our conversations and into the direct projects that we are working on,” Palaniappan said.

They also said they would work to strengthen UC caucuses — identity groups for Council members — to better serve as outreach mechanisms to the groups and students they support. When the caucuses were first created in 2017, some Council members said that caucuses would add “complex bureaucracy” to the College’s student government.

“We’ll be ensuring that the caucus system is going to be in full swing this semester because the leadership structures within those were just determined this past semester,” Palaniappan said. “This semester will really be the proving ground to see that through.”

Working from a UC office packed with boxes of past Council records that have never been indexed, Palaniappan said she hopes weekly reports from members to their committee chairs will allow the Council to keep track of current and completed projects, in addition to creating a written record of the Council’s work.

“Another major issue we’ve seen on the Council is institutional memory is not good,” Palaniappan said.

A previous version of this article incorrectly stated that UC leaders appoint Council members to cabinet positions every year. In fact, Zhang and Boucher were the first to appoint an executive cabinet.