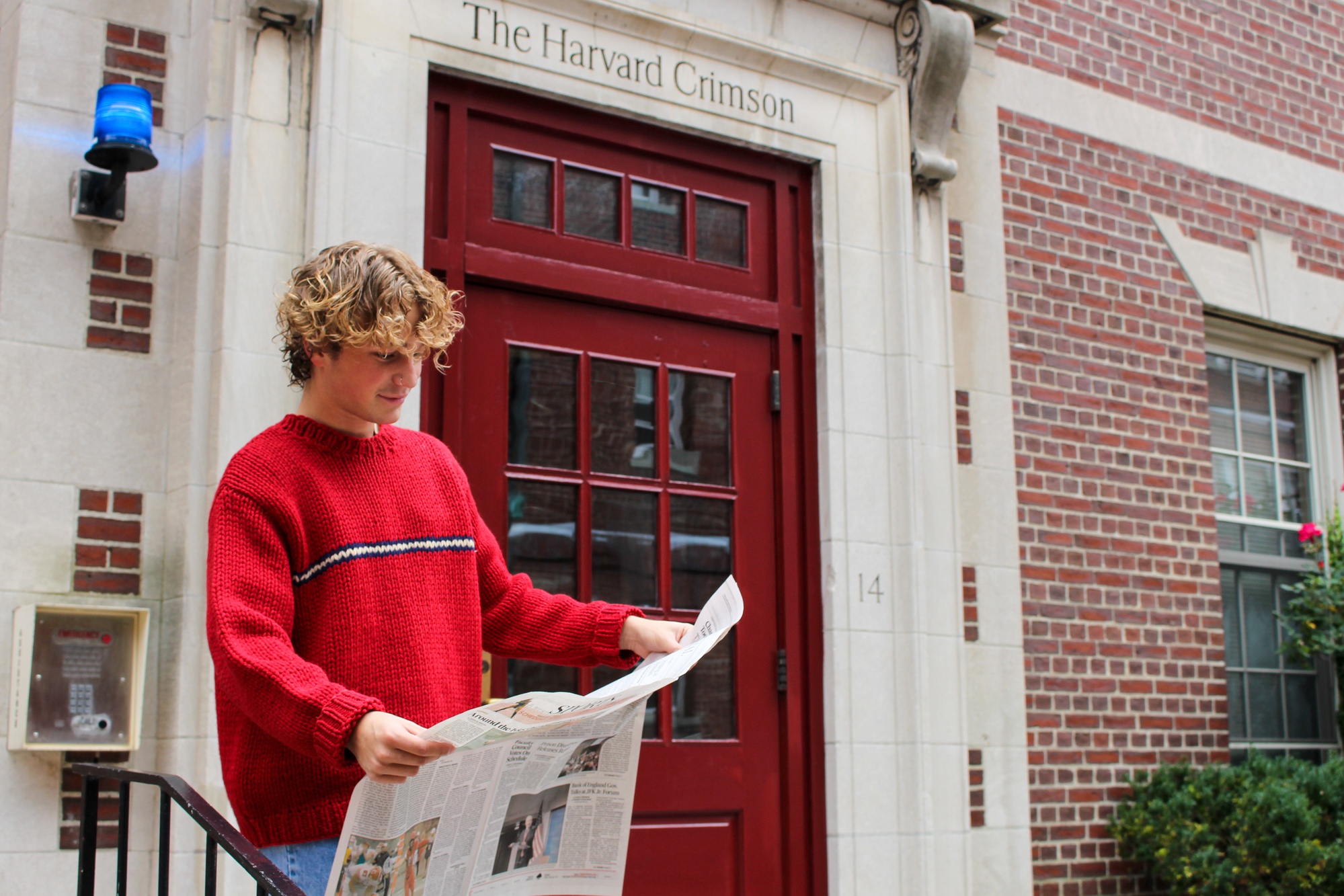 Paul G. Sullivan reads an edition of the Harvard Crimson's newspaper, the daily that Pete Buttigieg wrote a regular column for during his years as a student.
Advertisement
Advertisement

I want to root for the kind of person whose prose is occasionally sloppy, whose opinions aren’t just rigid but also rigorous and sometimes even risky, the type of person who doesn’t need to fall back on Yeats to understand the present day, or who fails to read “Ulysses” because they were doing something other than what was assigned for tomorrow’s class.
By Paul G. Sullivan

Since April, when Pete Buttigieg ‘04 announced he was running for the Democratic Party nomination, I’ve gone out of my way to dislike him. This summer, I would wake up in the morning, make myself a cup of coffee, and read the 750-word cultural commentary about Buttigieg that appeared almost daily on the New Yorker’s website. I read these articles in the same way my mom watches “Real Housewives:” because I loved to hate it.

Most of the articles I read about Buttigieg expressed a giddy, almost crazed adoration for his intellectual past — he speaks Norwegian, loves “Ulysses,” and was a Rhodes Scholar, they like to report. During his time at Oxford, I learned, he never cooked dinner with the other Rhodies but instead did the clean-up afterward — a not-so-subtle allegory for what Buttigieg would do in office after Trump and, perhaps, a commentary on the domestic superpowers of gay men.

A boy I made out with at a party last year told me he was working for Buttigeg’s campaign after graduation. Back at school, I went snooping around The Crimson’s website for articles about Buttigieg, trying to discern what people on campus think about the alum (while keeping a safe six degrees of separation this time). But the only recently published article I could find explained blandly that 14.8 percent of the class of 2019 plans on voting for the man. Nothing much interested me until I discovered something far, far better than articles about Pete Buttgieg: articles by Pete Buttigieg.

During his senior year, Peter P.M. Buttigieg had a column in the very pages of this newspaper. It was entitled “Liberal Art” and ran on alternate Monday’s. The column goes like this: Baby Buttigieg picks some high-brow piece of culture (Yeats, “Henry IV,” a 20th-century Lebanese poet named Khalil Gibran), and relates it to what’s going on in Washington, D.C. He likens “Henry IV” to George W. Bush, with the whole “‘following in his father’s footsteps into positions of power”’ thing. He claims Yeats’s lamentation that “the best lack all convictions, while the worst are full of passionate conviction” maps onto early 2000 partisan warfare. Life imitates art, yadda, yadda, yadda.

Even when Buttigieg picks a non-explicitly political topic, he still finds a way to bring it back to Washington. One of his articles, entitled “Prudes and Puritans,” is about Janet Jackson’s nip slip at the 2004 Super Bowl. Justin Timberlake’s intentions when he grabbed Jackson’s shirt shouldn’t be our focus, he argues. Instead, Bush’s political intentions should. He calls Eminem “an index of our time” and argues that the “rise of angry white rap” is due to, you guessed it, the Bush administration.

At this point, talking about Buttigieg has become my go-to party trick. People love hearing what I, a white gay man at Harvard, think about the white gay Harvard graduate running for office. Corona in hand, I’ve sat on sweaty couches and close read his campaign posters: the millennial yellow background; the chaste navy sweatshirt over the starched button-up; how the poster is emblazoned with not his last name but his first, a reminder that he is coming to us from the potholes and school committee meetings of local government.I’ve rolled my eyes and said, “his queerness is just not my queerness,” referring to the I’m-just-the-same-as-all-of-you ethos that makes him so palatable. Nothing gives me pleasure like disliking Buttigieg.

I expected to reap a similar pleasure from reading Buttigieg’s column — containing as it did information about him when he was my age, at the same school, working for the same paper, concentrating in the same department (History and Literature). But mostly, when I read his column, I was bored. Unlike many articles in The Crimson, it’s hard to make fun of Buttigieg’s. His prose is sophisticated but straightforward, his tone level-headed, likable. And his takes are, well, not that hot: Republicans bad, Democrats good.

In June of 2016, New York Times columnist Frank Bruni wrote an op-ed entitled “The First Gay President?” He writes that “If you went into some laboratory to concoct a perfect Democratic candidate, you’d be hard pressed to improve on Pete Buttigieg.” He then goes onto prove his point: Buttigieg has degrees from Harvard and Oxford, he served in the Navy Reserve, he runs half-marathons and gives TED talks, he worked at McKinsey, he speaks “passable Arabic,” and he won his mayoral campaign with 80 percent of the vote.

But this generated-in-a-laboratory quality that makes Buttigieg so impressive to Bruni is what makes his column such a boring read. Everything in Buttigieg’s articles seems like a collage of stuff he cut and glued together from class and CNN. I want something less innocuous than that. I want to root for the kind of person whose prose is occasionally sloppy, whose opinions aren’t just rigid but also rigorous and sometimes even risky, the type of person who doesn’t need to fall back on Yeats to understand the present day, or who fails to read “Ulysses” because they were doing something other than what was assigned for tomorrow’s class.