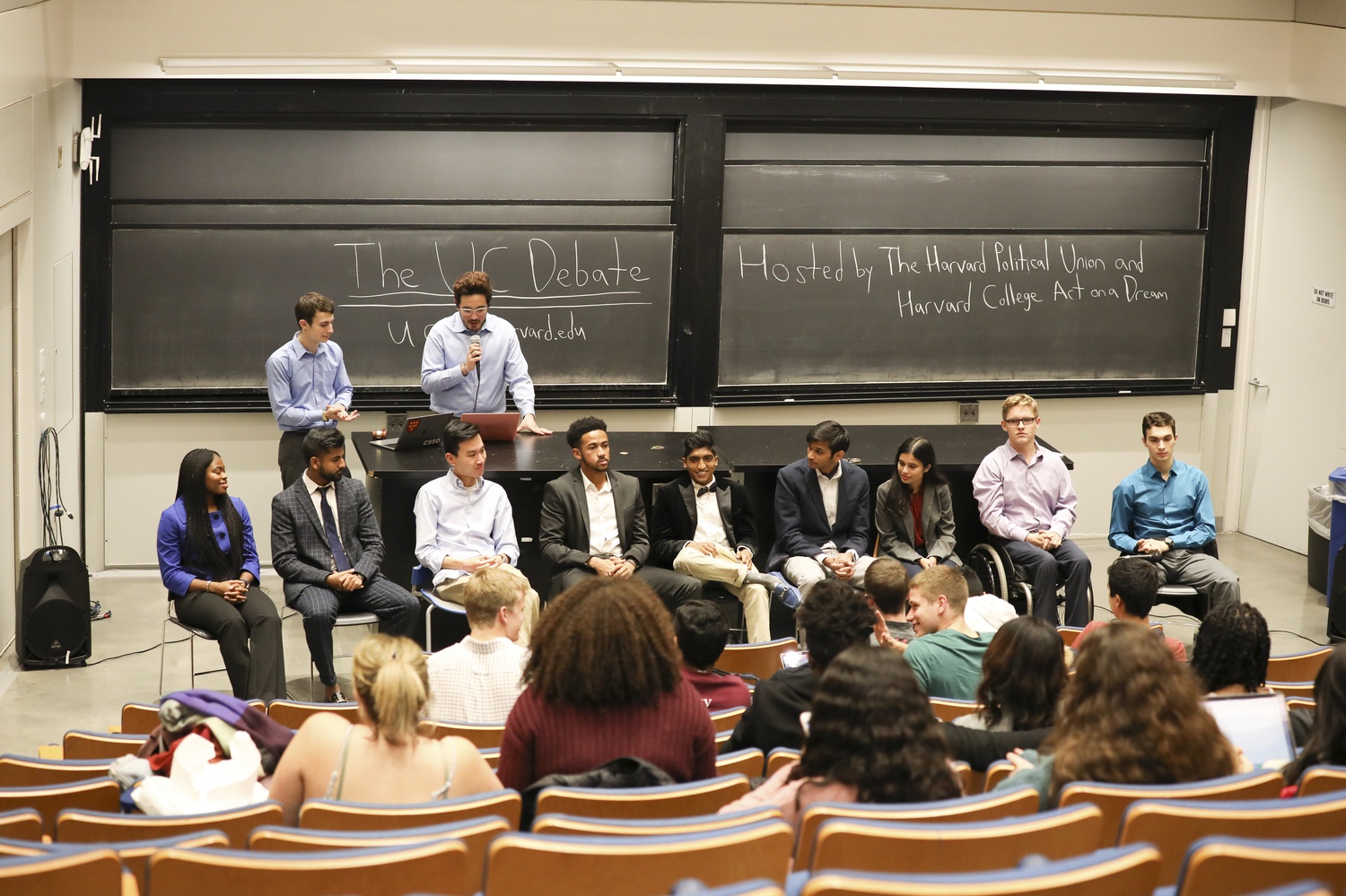 Ahead of the one-week voting period, which opens Nov. 11, candidates for the Undergraduate Council President and Vice President discussed their campaign platforms in debates on Saturday.

The five candidate tickets — James A. Mathew ’21 and Ifeoma E. White-Thorpe ’21; Andrew W. Liang ’21, representing himself and his running mate Aditya A. Dhar ’21, who did not attend the debate; Prashanth “PK” Kumar ’21 and Michael O. Raji ’22; Sanika S. Mahajan ’21 and Rushi A. Patel ’21; and Thor Larson ’21 and Case McKinley ’21 — participated in a debate Saturday night co-hosted by Harvard Political Union and Harvard College Act on a Dream.

HPU Chair Matthew Miller ’21 and Leo A. Garcia ’21 — one of the intersectionality co-chairs of AOD — moderated the debate.

To kick off the debate, candidates opened with two-minute remarks explaining their major campaign platforms.

Larson and McKinley said their campaign has three focuses, including “making sure that everything at Harvard stays accessible, affordable and available to all students,” according to McKinley.

Mahajan and Patel said their campaign is focused on “bridging systemic gaps” on campus, including areas of student life such as mental health, sexual assault prevention, and academics.

Kumar and Raji described themselves as the “outsider ticket” because neither has served on the UC before, adding that they have a “good finger on the pulse of the student body.” They also said they wanted to boost school spirit and improve mental health resources on campus.

Liang said his campaign platform revolves around abolishing the UC, abolishing the $200 student activities fee to pay students a “freedom dividend,” and raising money to “B.R.I.B.E.” members of the Harvard Corporation — the University’s highest governing body. B.R.I.B.E., according to Liang and Dhar’s campaign website, stands for Be Responsible Investing Bacow’s Endowment.

Liang added that he and Dhar will accomplish their campaign goals by sitting on University President Lawrence S. Bacow’s desk.

Current Undergraduate Council leadership did not respond to a request for comment.

Mathew and White-Thorpe said their campaign ticket is the most diverse, as it is the only ticket that differs in both “background and gender.” They said their campaign will focus on a “unity caucus” comprised of both UC and non-UC-affiliated members, including affinity groups.

After their opening statements, the candidates engaged in 12 minutes of debate on two questions addressing the recent Pulse Survey and student mental health on campus.

The recently released Pulse Survey, which found that 19 percent of Harvard students felt they did not belong, also found that a larger percentage of Hispanic/Latinx and African American students answered that they do not feel they belong.

Raji said the creation of a multicultural center would help cultivate a feeling of belonging on campus.

“I think the idea of belonging is tied closely to the idea of space on campus,” Raji said.

The moderators also asked the candidates to respond to two round-robin style questions — each ticket had the opportunity to speak only once on each issue.

“How would you protect undocumented students on campus through the UC and what do you think of The Crimson’s decision to contact ICE and then The Crimson’s subsequent response?” Garcia asked.

The Crimson reported on a Sept. 12 protest by student-led immigration advocacy group Act on a Dream and quoted several students’ criticisms of ICE, including calls for its dissolution. The article notes that ICE did not immediately respond to a request for comment.

Following the article, a petition — started by Act on a Dream — criticized The Crimson for requesting comment from an ICE spokesperson for its Sept. 13 article, “Harvard Affiliates Rally for Abolish ICE Movement.”

On stage, all five tickets said they disagreed with The Crimson’s decision to request comment.

“We believe that the Crimson was fundamentally wrong in what it did. Listen, that’s why we’re all here on the stage right now,” Mathew said. He and White-Thorpe released a video earlier in the week denouncing The Crimson and refusing to participate in its annual debate.

Raji said his first act on the UC would be to “condemn The Crimson for their actions.”

Mahajan and Patel said they will work with Harvard Public Affairs and Communications to put together “teaching documents” to inform students how to “interact with Crimson reporters.”

Crimson President Kristine E. Guillaume ’20 wrote in an emailed statement responding to the candidates’ criticisms that The Crimson asks all parties criticized in a story to comment in order to maintain fairness in its coverage.

“This policy demonstrates a commitment to ensuring that the individuals and institutions we write about have an opportunity to respond to criticisms in order to ensure a fair and unbiased story,” Guillaume wrote. “We welcome feedback from our readers and from those we cover. In this case, we met with representatives of Act on a Dream to hear their concerns and explain our approach. For this story and all others, The Crimson strives to adhere to the highest standards of journalistic ethics and integrity.”

The second round-robin question asked the tickets to explain what was “unique” about their platforms.

Larson named the “fun fund” — funding for small student outings — as a novel aspect of his and McKinley’s campaign, while Kumar mentioned his desire to work with student-athletes in light of recent articles in The Crimson about struggles with isolation.