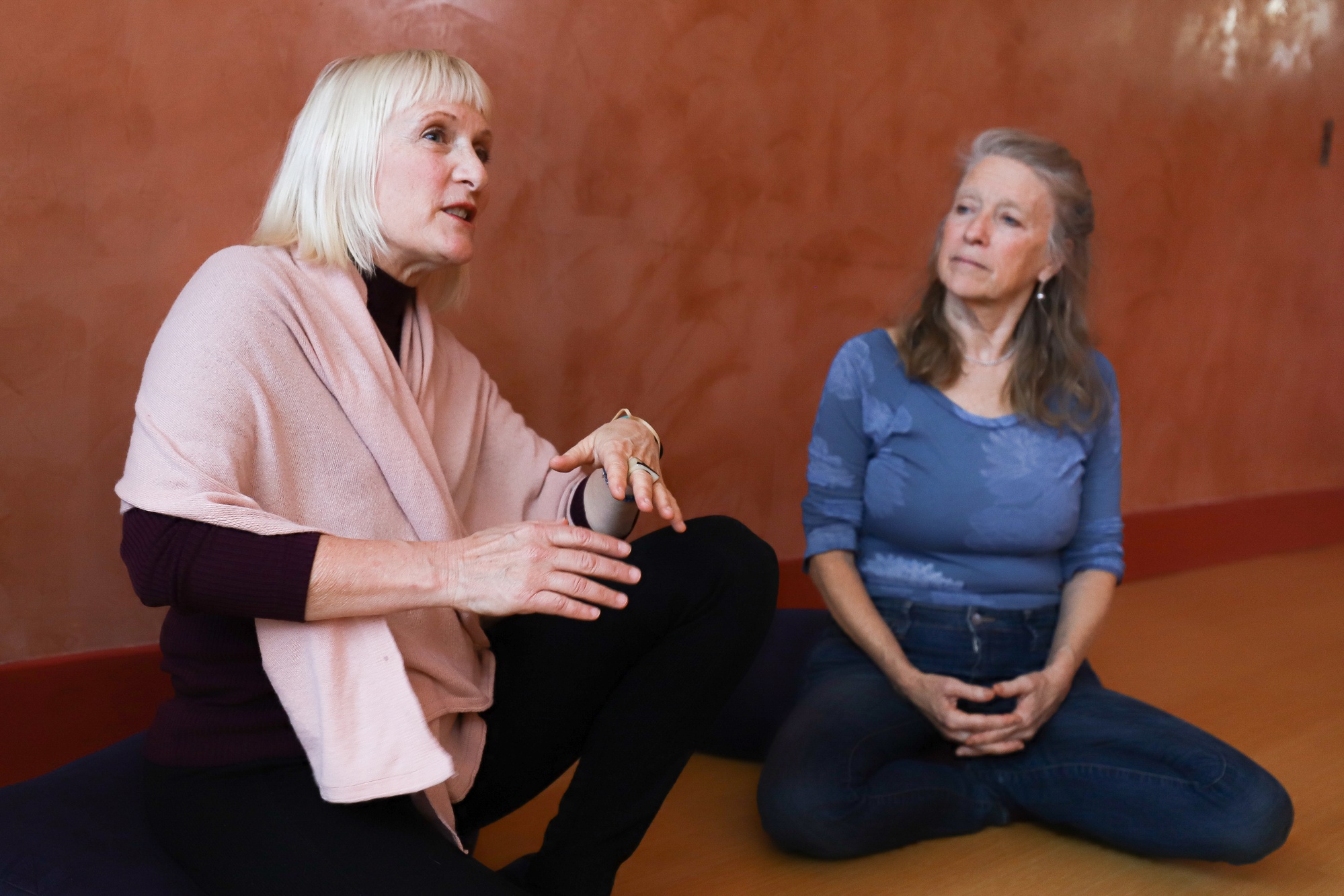 Billie Jo Joy and Annie P. Hoffman are the co-owners of Art & Soul, a Cambridge yoga studio that aims to unite the somatic with the spiritual.
Advertisement
Advertisement

From 1984 to 2001, Hoffman and Carole Ann Fer co-owned Clayground, a pottery studio that the Cambridge Women’s Commission refers to as a “socialistic pottery business.”
By Mollie S. Ames and Kevin Lin

They are Annie P. Hoffman and Billie Jo Joy, co-founders and co-managers of Art & Soul, a Cambridge yoga studio that aims to unite the somatic with the spiritual. Hoffman owns the business and the building. She and Joy are dedicated yogis with decades of experience, but their previous experience with pottery and theater bring a flexible creativity to their studio.

Joy explains that her background in theater and improvisational comedy, as well as influence from friends in the visual arts, inspired her to create a supportive space for clients to explore yoga, dance, and acting. “We thought maybe we could have a space that was for the internal contemplative arts and the expressive arts. So Art & Soul was born with that idea,” she says.

But before this philosophy gave way to Art & Soul, Hoffman had made use of the same space in a different way, with a different business partner. From 1984 to 2001, Hoffman and Carole Ann Fer co-owned Clayground, a pottery studio that the Cambridge Women’s Commission refers to as a “socialistic pottery business.”

“Making something handmade was a personal expression of wanting to be close to the earth,” says Hoffman. The pair first began making pottery together in Fer’s basement, crafting pots and mugs with their own hands when it seemed to them like the rest of the world bent toward mass-production.

“We had a little wagon. We took it out to [Faneuil Hall]. We sold our pots on the street. And, you know, we did pretty well,” says Hoffman. 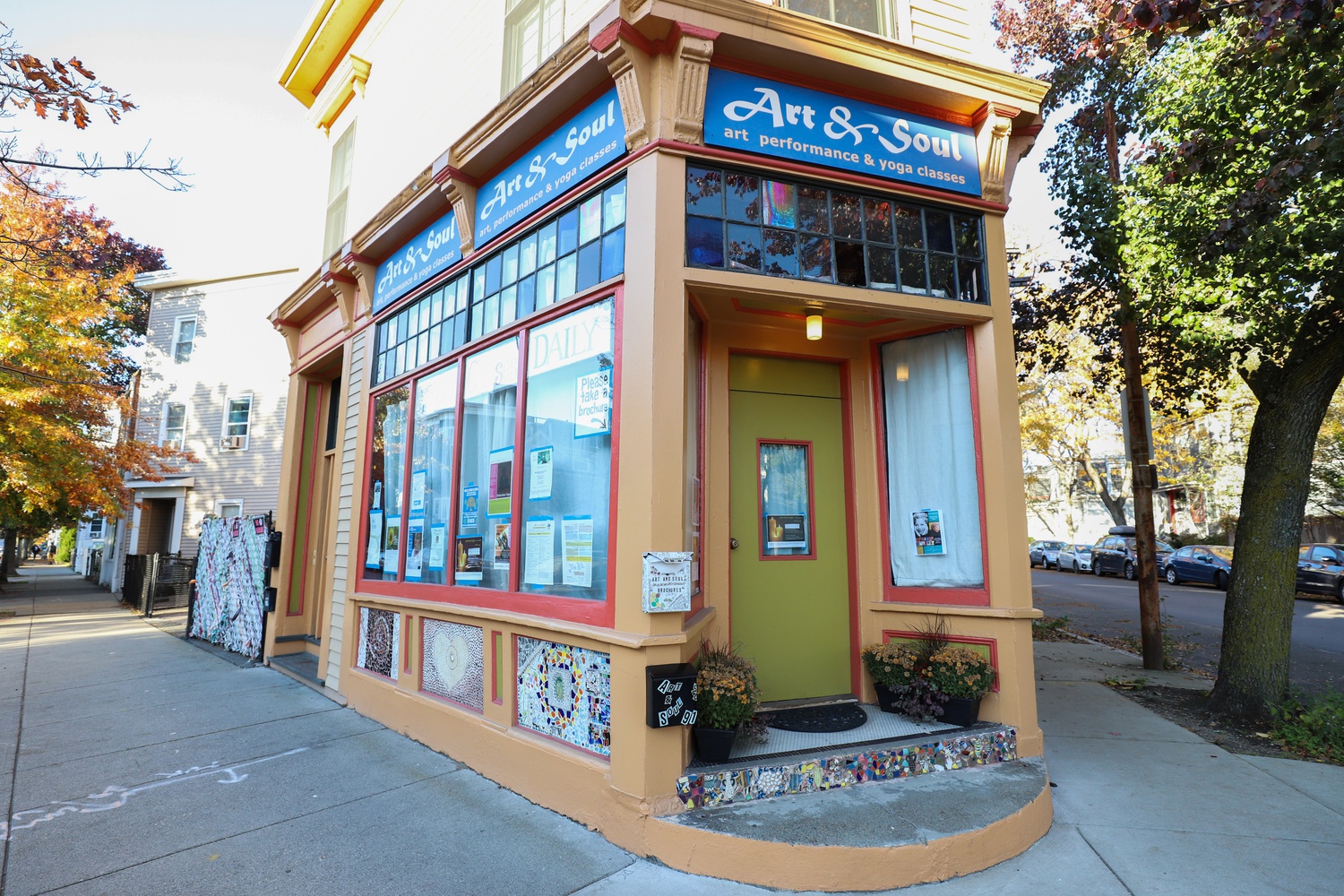 Before housing Art & Soul yoga studio, 91 Hampshire Street was home to Clayground, a pottery studio that the Cambridge Women’s Commission refers to as a “socialistic pottery business.” By Amanda Y. Su

They began renting a small storefront next door to the present-day Art & Soul in 1976. By 1984, they purchased Art & Soul’s current corner building for only $58,000. They are proud that it was renovated with “women’s hands.”

“Women were going into the trades,” says Hoffman. “My girlfriend at the time did the electricity. She just got her electrician’s license. You know, I was using a sledgehammer for the first time, and it was great. It was really great.”

A community for women laid the literal foundation of Clayground, establishing a core feminist groundwork that remained integral to what would later become Art & Soul after Fer moved up to Maine. By then, Hoffman wanted a change of pace from wedging clay and sweeping dust, so she decided to focus on yoga.

At the same time, Joy –– with whom Hoffman became friends through a local Iyengar yoga community –– was directing Harvard’s first production of “The Vagina Monologues,” a show dedicated to the personal narratives of women navigating their sexuality.

But Hoffman and Joy’s “feminist agenda” is not only about empowering women. They also hope to broaden the accessibility of their practice to people of all genders, races, and class backgrounds.

They understand well the prevailing, commercial depiction of yoga: the image of thin, young, white women — not men — who can afford the steep prices of yoga classes and equipment. They consciously encourage male participation in their sessions, and Joy’s recent yoga retreat to Italy provided two scholarship opportunities.

Their particular “feminist agenda” makes them wary of the ways in which their studio could fall into the traps of peddling “the fast food of yoga” — as Joy refers to it, “McYoga.” They strive to embody what they perceive as the “soul” of yoga, which includes staying true to the roots of the Cambridge landscape.

Hoffman often reflects on Cambridge developers’ profit-centered motivations and the city’s resulting gentrification. These considerations have a profound influence on how Hoffman behaves as a landlord to the other tenants of the Art & Soul building. “The way that I've run this building as a landlord is to keep the rents pretty much as they were and to just run at cost,” says Hoffman.

As Cambridge’s terrain continues to transform, Hoffman and Joy remain grounded in the space and ideology they’ve cultivated for decades. “I'm not planning on selling the building,” Hoffman says firmly. “I feel like I've been able to come into this neighborhood and establish the space in which first pottery, and then yoga and the arts, have been available and accessible.”

A previous version of this article stated that Annie P. Hoffman and Billie Jo Joy were co-owners of Art & Soul. In fact, Hoffman owns the business and the building.