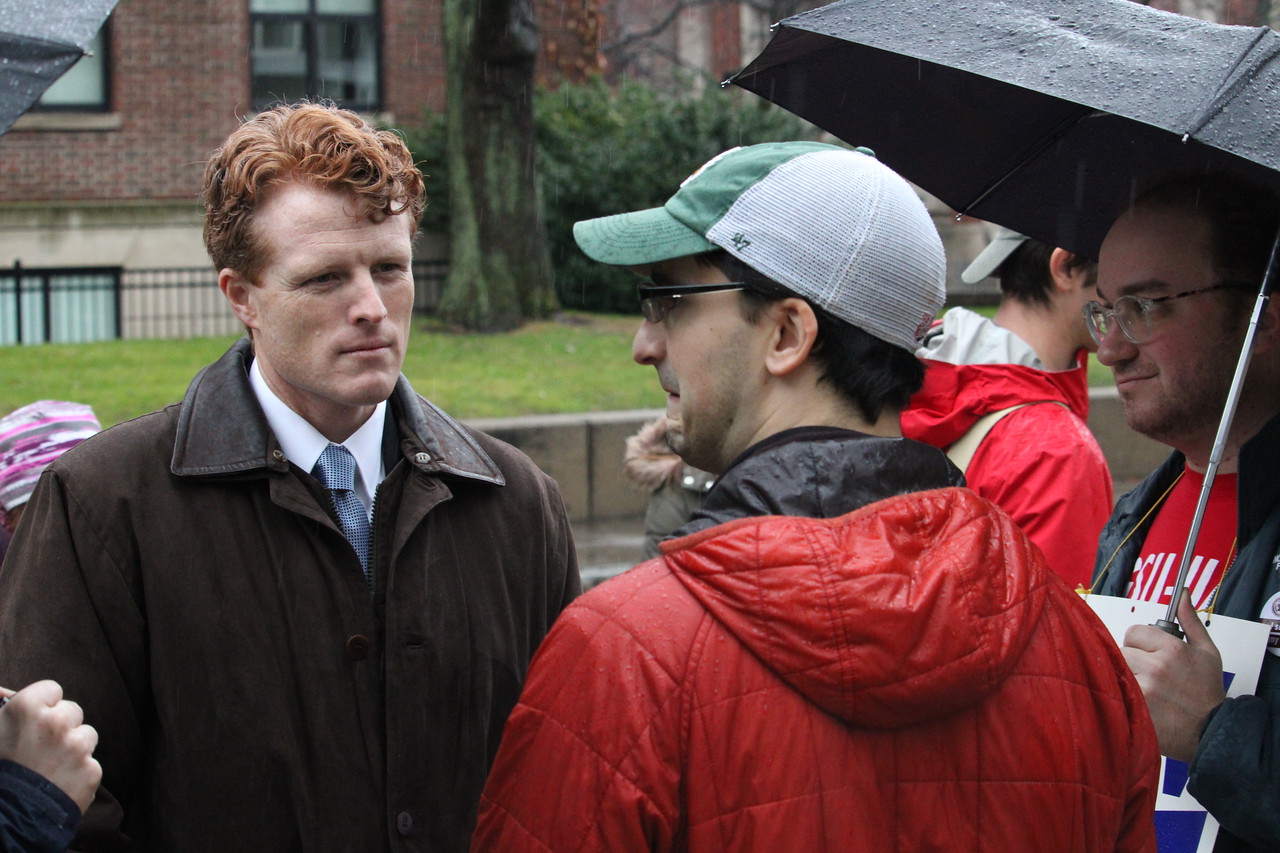 After roughly 13 months of negotiating with University administrators in pursuit of their first contract, members of Harvard Graduate Students Union-United Automobile Workers began their strike on Dec. 3. More than 90 percent of union voters authorized the strike in late October.

As part of their efforts, graduate union picketers and their supporters have disrupted mail and package deliveries across campus for the past two weeks. Previously, United Parcel Service stopped delivering to Harvard in support of the strike.

Kennedy spoke with members of the bargaining committee about the status of negotiations and their proposals early Saturday morning. Afterwards, he joined the picket line in the rain and gave a short speech to gathered members of the graduate student union.

“What I think this breaks down to is a philosophical difference between what we believe is work,” Kennedy told the picketers. “What the University is saying, it’s trying to classify you all as students, and not recognizing the contributions you make to the University.”

In an interview with The Crimson after he finished picketing, Kennedy spoke about the lessons he learned while he was a student at Harvard Law School.

“When I was a student here — in the Law school — one of the things that stuck with me about the classes that I took and what our professors taught was, our society was founded upon the idea that everybody should be able to meet their own basic needs, and when that system of power transfers too far to one side, that you’ve got to fight back and take it,” he said.

Kennedy also said he recognizes the value of graduate students’ work at Harvard.

“They’re educating the next generation of leaders, of business, of civil society, of law, teachers, educators, doctors, and off of an educational model that depends on the work that graduate students are going to provide,” he said. “To not recognize that contribution in the midst of an overall massive inequity of economic power and bargaining power — I would hope that if there’s one institution that would take the lead on recognizing that, it would be this one.”

“The University appreciates the vital role that our student workers play in fulfilling Harvard’s teaching and research mission,” Garber wrote at the time.

Kennedy — who is currently running to represent Massachusetts in the U.S. Senate — is one of numerous politicians to walk the picket lines over the last two weeks. One of his opponents in the Democratic Senate primary, labor attorney Shannon E. Liss-Riordan ’90, picketed last week. U.S. Representatives Katherine Clark (D-Mass.) and Ayanna Pressley (D-Mass.) attended a rally on Monday alongside Cambridge City Councilors Sumbul Siddiqui and Alanna M. Mallon and Cambridge Mayor Marc C. McGovern.

“We have seen this over and over and over again, but you're also seeing the first time — certainly since I’ve been around politics — we’re actually winning,” Kennedy told the picketers at the end of his remarks. “It’s because of what you guys are doing. I'm so grateful. Thanks for letting me stop by and good luck.”