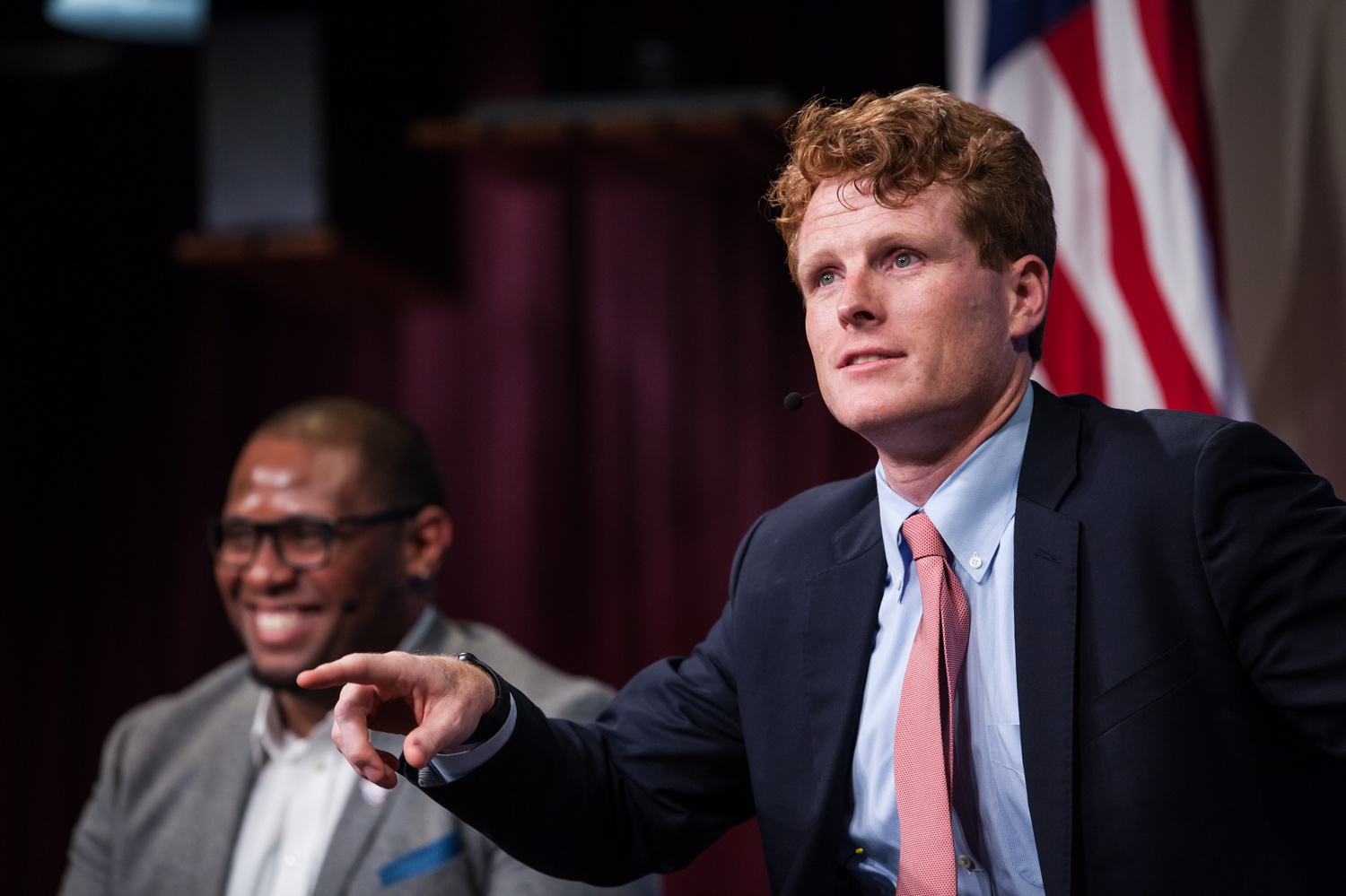 Kennedy — in conversation with Swathi R. Srinivasan ’21 and IOP Director of Student Programs Robert C. Watson Jr. ’09 — touched on a wide range of issues including political polarization, impeachment, structural reform, and the urgency of his campaign for Senate.

Kennedy, who formally announced his plans to run for Senate last month, responded to criticism from several audience members who questioned his attempt to unseat the incumbent Markey — a longstanding Massachusetts political figure who has supported progressive environmental legislation.

One audience member asked Kennedy about his family’s investments in Exxonmobil, to which he firmly defended his record on advancing climate policy.

“I’ll put my environmental record in Congress up against anybody’s,” Kennedy said. “Those assets are family assets that have been held for an awfully long time, well before I was born — I exercise no control over them whatsoever.”

Kennedy also discussed his efforts to dismantle the filibuster system, which he said inhibits efficient political action against climate change.

“I was, and am, an original cosponsor of The Green New Deal. I was on it from day one,” Kennedy said of the liberal climate action proposal. “And if you want to deliver on what the promise of what the Green New Deal is, Mitch McConnell ain’t gonna let you do it.”

With regard to issues with the filibuster, Kennedy said he is the only candidate who has undertaken meaningful work toward tackling this structural barrier to environmental action. 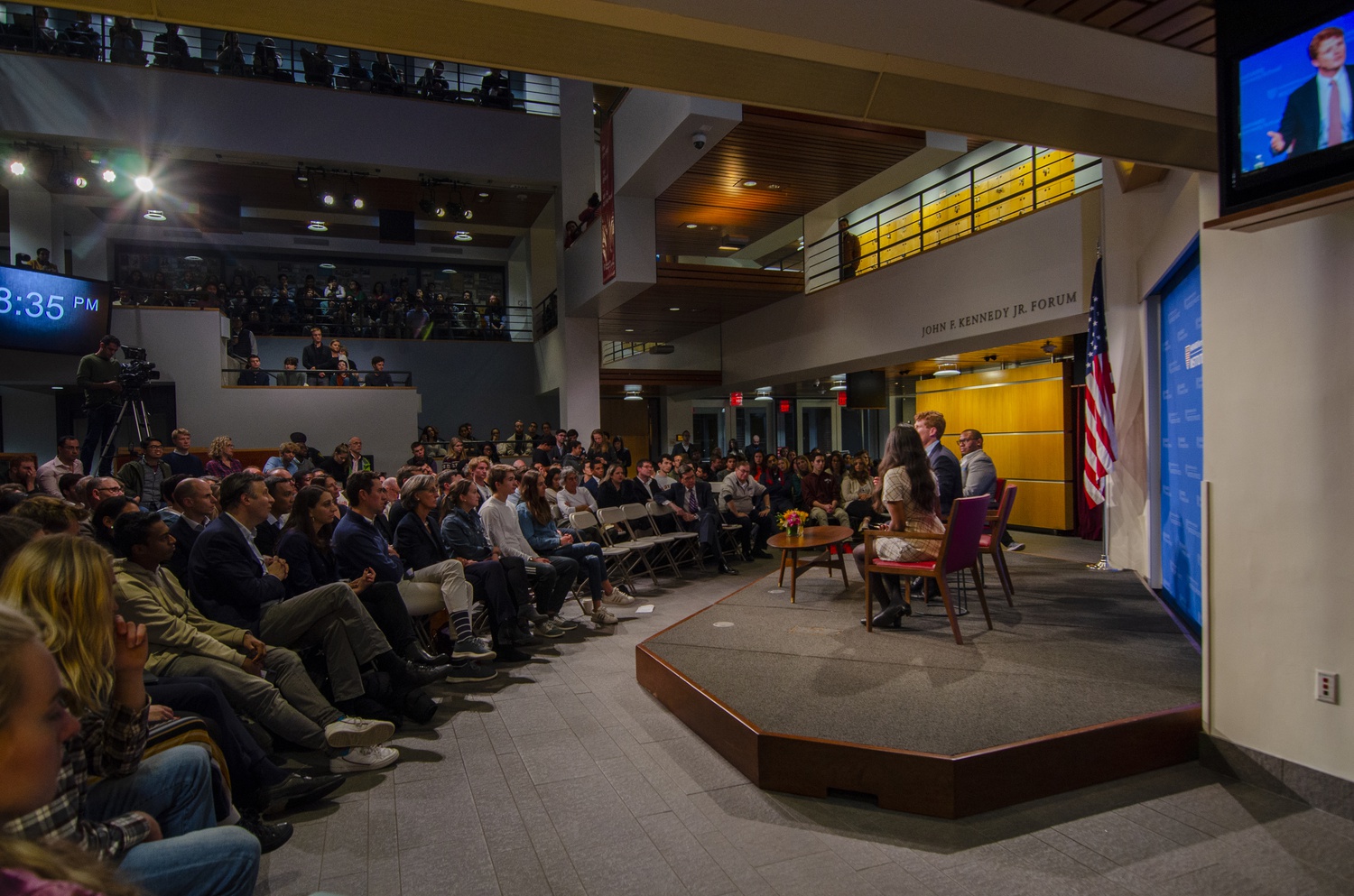 Attendee Luke D. M. Albert ’22 said he was initially critical of the Kennedy’s decision to run against Markey, but was reassured by his comments Thursday about his commitment to advance climate policy.

“I’d say I think the elephant in the room going in tonight was obviously a Senate primary challenge against Senator Markey, which I will say I was certainly one of the people skeptical of at first,” Albert said.

In the face of questions about his candidacy, Albert said he found the Kennedy’s responses to be direct and impressive.

“I certainly have sort of tempered my original position on it,” Albert said.

Srinivasan, who had previously worked with the Kennedy through the IOP Policy Program, said she also appreciated the straightforwardness and honesty with which she believes Kennedy responded to questions from her and the audience.

With regard to the approaching Democratic Primary for the 2020 presidential election, Kennedy voiced his support for Senator Elizabeth A. Warren (D-Mass.).

Kennedy concluded his talk by urging audience members to vote in the 2020 election.

“This country is at a tipping point, and you all have it in your hands to actually send a message to every single other person in the United States, and every single other person around the world about what kind of nation we are, and what kind of country we will be, and what it means to be part of the United States in this moment of a vacuum of world leadership,” Kennedy said.