As Pickets Continue, Some Student Workers Have Declined to Strike

As hundreds of graduate student union members and their supporters have cycled through picket lines across campus over the past week, some students have decided not to join their ranks.
By James S. Bikales, Ema R. Schumer, and Ruoqi Zhang 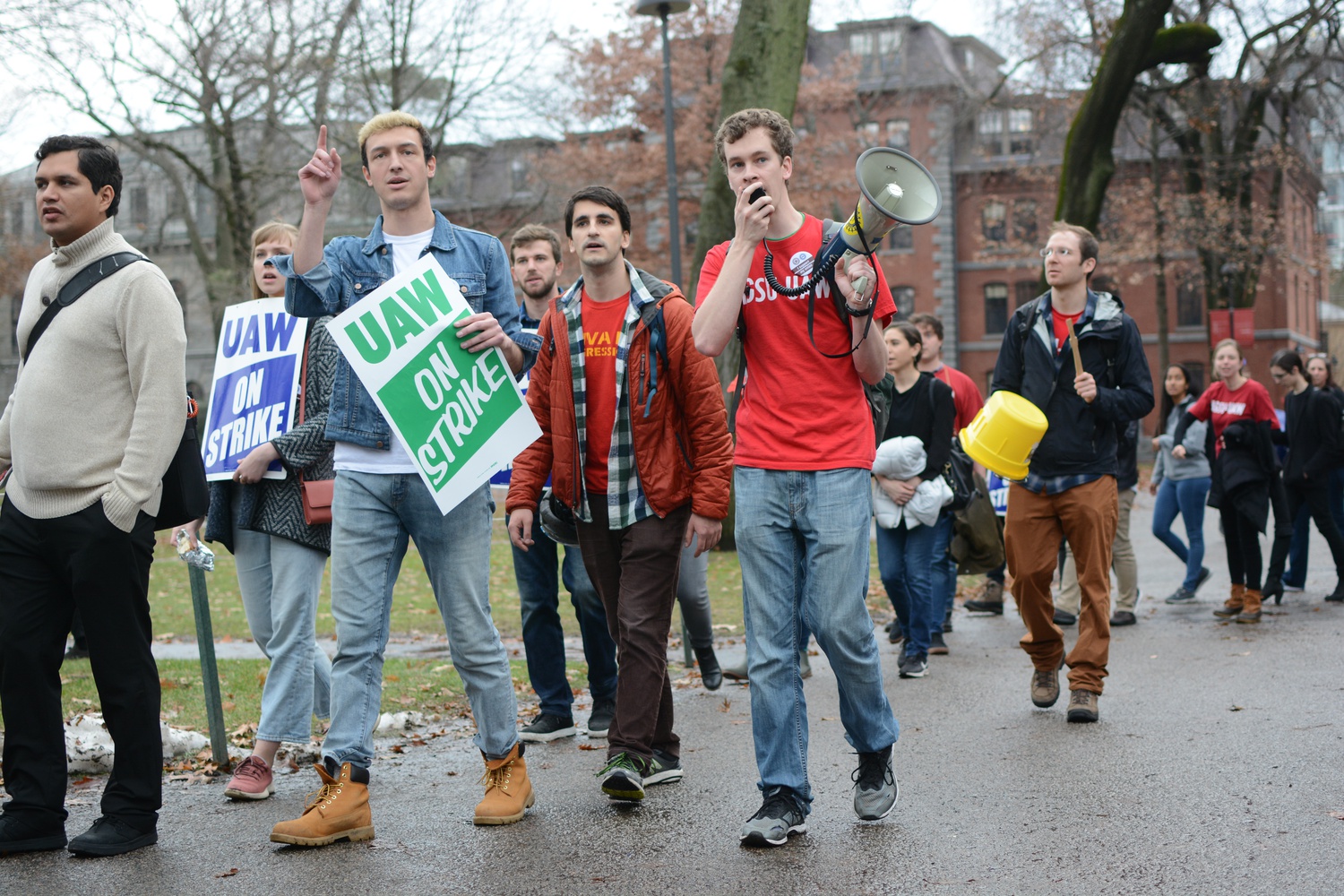 Union members and supporters picket outside Mass. Hall Tuesday afternoon on the sixth day of the HGSU-UAW strike. By Owen A. Berger

As hundreds of graduate student union members and their supporters have cycled through picket lines across campus over the past week, students like Soufiane A. Aboulhouda, a Medical Sciences Ph.D. candidate at the Graduate School of Arts and Sciences, have decided not to join their ranks.

Aboulhouda, who also conducts research at Harvard Medical School, cited his obligation to his students and his research colleagues as motivation to continue teaching even as others have set aside their work to disrupt deliveries, picket buildings, and spread the word about the graduate student strike.

As Harvard Graduate Students Union-United Automobile Workers enters the second week of its strike, 19 graduate and undergraduate students who have chosen not to strike shared their decision with The Crimson. Their reasons range from a sense of duty to their peers and students, to financial hardships they believe would come with joining the strike, to fear about what a work stoppage might mean for international students’ visas. Others simply do not agree with everything the union is asking for in its contract negotiations with Harvard.

HGSU began its indefinite strike Dec. 3 after roughly 13 months of negotiations with the University on its first contract. Though the two parties have reached agreements on 12 provisions over the past year, they remain at odds on key issues, including compensation, health care, and grievance procedures for harassment and discrimination. More than 90 percent of union voters approved a strike in late October.

“I think I can understand why a strike is being organized considering the breadth and depth of the student body that the union covers,” Aboulhouda said. “I think many of them are perfectly justified to ask for what they're asking. But yes, I have prior commitments and so my main thought is that I have 12 hours of work to do, and I've got to get it done before the break.”

‘I Cannot Afford To Stop Working’

Daniel J. Richard, a third-year Ph.D. student in Human Evolutionary Biology, said that financial considerations have made it impossible for him to join the picket line.

He said that fulfilling his teaching responsibilities — which include teaching a lab section and grading exams for Life Sciences 2: “Evolutionary Human Physiology and Anatomy” — is necessary because he relies on his pay from the University.

“I cannot afford to stop working,” he said. “If I don't get a paycheck this month, I will not be able to cover rent for this month.”

The union is offering strike benefits to those who walk the picket line or perform other strike duties for an average of four hours each week. These benefits include $275 per week for each picketer from the UAW’s strike fund. The fund will go into effect after the strike has gone on for eight days and if the University docks individual strikers’ pay.

Richard, however, dismissed the strike fund as “vastly inadequate to my living expenses.”

For international students, financial issues are not the only concern — because they are on academic visas, striking brings uncertainty to their ability to remain in the United States.

“I do empathize with a lot of people who are struggling, but unfortunately, it's a huge risk to take with my visa and immigration status, too,” Jagdish said. “All the scenarios that might occur are very unlikely, I'm sure, but if you weigh that against the possible risks, I just think it's not worth it.”

Several undergraduate course assistants — who are represented by the union — said that while they may support the union’s demands, they feel an obligation to their students and faculty members to continue teaching and do not necessarily believe they would benefit as much as graduate students from the eventual contract.

Elijah Tai ’22, a course assistant in Computer Science 50: “Introduction to Computer Science,” said that while he agrees with the striking workers, his “primary goal” is to educate and excite students about computer science.

“For me personally, I have an obligation to teach because when I signed up to be a staff member for CS50, one of the things I said was that I would work really, really hard and to teach people as much as possible,” Tai said.

Tai added that going on strike would take away “crucial support” for students as they work on their final projects.

In Statistics 110: “Introduction to Probability,” most of the undergraduate staff is not striking, according to course assistants Michael G. Isakov ’22 and Justin Zhu ’21.

Isakov said that while many of the union’s proposals are “reasonable,” some are less relevant to undergraduates, such as paid leave.

“There aren’t a lot of people who are adamantly against any particular proposal that is being put forward,” Isakov said. “It’s more of the sense that a lot of the issues don’t apply to us and, thus, we don’t have as much of an incentive to strike.”

Zhu said that he decided to continue working because he feels that undergraduates can “bridge the dichotomy” between the University and the union.

“I see my role as helping the professors who really have no dog in this fight while at the same time, you know, kind of making sure that the overall academic culture at Harvard is still sustainable and thriving,” Zhu said.

Still, some students said they are not striking because they do not agree with some of the union’s demands.

A third-year male graduate student in the Faculty of Arts and Sciences who is not striking said that though he supports the union’s desired grievance procedure, he takes issue with the union’s specific compensation and health care proposals. The student, who does not want to be named because he is concerned about jeopardizing relationships with peers, said he believes getting paid to study at Harvard in the first place is a privilege, and he considers the calls for increased compensation and benefits to be ungrateful.

HGSU organizers did not respond to multiple requests for comment for this story.

While many student workers have decided not to strike, that choice does not always go unnoticed by their peers in the union.

A female student in GSAS, who is not striking because she believes the union’s demands are too strong and feels a duty to her students, contends that the union has created an adversarial culture for those who choose not to join the pickets. She requested anonymity because she fears retaliation for criticizing the union’s position.

The student characterized the union as having created a with-us-or-against-us culture that has bred hostility toward those who have decided not to go on strike. She said that she is afraid to share her views on the union with her peers and that this fear has affected her relationships and her emotional state.

She said strong supporters of the union have repeatedly sent messages to her private email and cell phone asking her to sign up to strike, which she said she never agreed to and infringes on her privacy.

Still, the student said she does not believe that the union as a whole is responsible for promoting this attitude. Rather, she believes that its most zealous supporters have created what she called a hostile atmosphere.

Throughout the strike, union members on the picket lines have discussed holding text banks to reach out to their peers and encourage involvement in the strike. The female GSAS student said she does not find it appropriate to contact individual members about their choice to participate in the strike.

“Can you confirm whether or not you are withholding labor?” reads one of the text messages sent to the student from a union member and reviewed by The Crimson.

Several other students, including a male teaching fellow in the Physics department, said he feels social pressure to not speak out in opposition to the union. The Physics student requested anonymity due to the peer pressure he feels at work.

For student workers like Aboulhouda, however, his duty to his students and his academic progress ultimately have driven his decision not to participate.

“The primary reason I’m not striking is to follow up on the commitments that I’ve made to others, as well as to myself to push my research forward efficiently,” he said.