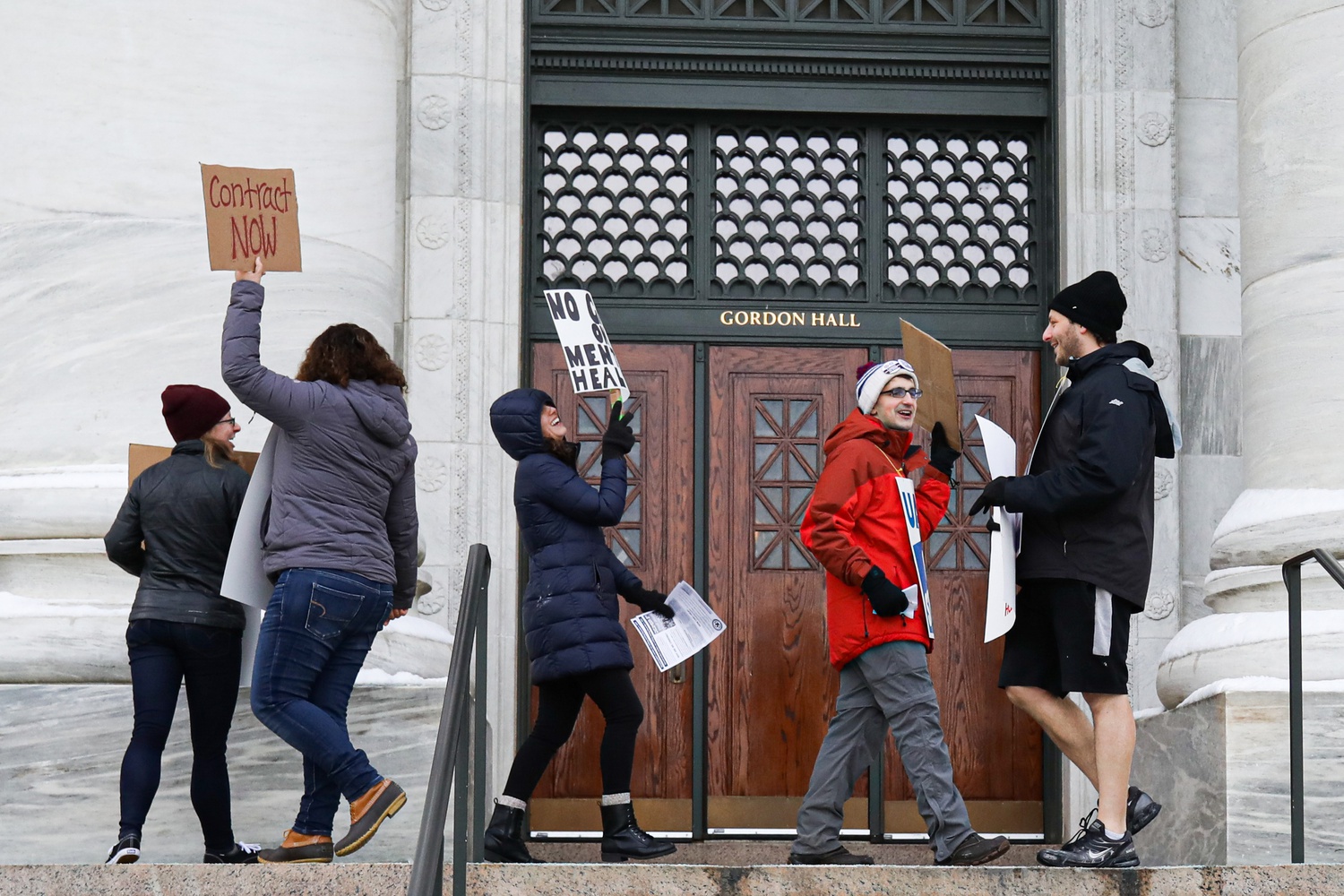 A 40-minute bus ride away from Harvard Square, over the Charles River and through Boston, a picket line at Harvard’s Longwood campus marks another fault line between the University and Harvard’s graduate student union.

Harvard Graduate Students Union-United Auto Workers members began picketing at the Longwood campus Wednesday, a day after their strike began in Harvard Yard. Union members formed two picket lines in Longwood — one outside of Gordon Hall, a Harvard Medical School administrative building, and the other outside the Kresge Building, which holds the Harvard School of Public Health.

After more than a year of contract negotiations with the University, HGSU officially began its strike on Tuesday. Though the two parties have reached 12 tentative agreements, they remain at odds over health care benefits, compensation, and a procedure for adjudicating sexual harrassment and discrimination complaints.

The Longwood campus houses the School of Public Health, the Medical School, and the Harvard School of Dental Medicine. More than 2,500 students and 11,000 faculty populate the campus.

Picketers at Longwood chanted various science-themed slogans, including “Put pipettes down! We need a contract now!” and “Hey don’t make that buffer, while your fellow students suffer!”

University spokesperson Jonathan L. Swain wrote in an emailed statement Monday that the University still believes that a strike is “unwarranted.”

“Student workers have [a] vital role in fulfilling Harvard’s teaching and research mission, and with that in mind, the University is committed to addressing concerns that have been raised throughout this process,” Swain wrote. “A strike will neither clarify our respective positions nor will it resolve areas of disagreement.”

Systems Biology Ph.D. candidate Daniel S. Eaton said he was impressed by the turnout at the Longwood strike since many who work at Longwood are faculty or staff scientists, not graduate students.

“I’m actually really impressed with how we’re doing here,” he said. “I think things are staying excited, and I hope that we’ll be able to propagate this energy into the future.”

Though the picket lines in Longwood resemble those in the Yard, union members at the medical campus shared a particular interest in the bargaining provisions concerning health.

The union is also demanding that the University pay 90 percent of dental care costs. Currently, the dental health plan for graduate students requires students to opt-in and pay an additional fee.

In response, the University has stated that it will not agree to cover the costs of each member’s health care. Harvard has instead offered pool funds to offset health insurance premiums, as well as cover dental care and child care.

Population Health Services Ph.D. candidate Mathilda Regan said her role on the picket line is an extension of her commitment to health.

“I think especially studying public health, we realize how important it is for people to have access to good medical care,” Regan said.

Following a morning of picketing Thursday, HGSU hosted a rally in Longwood that drew a crowd of roughly 50 strikers. Speakers, who criticized the University for its alleged unfair treatment of graduate students, also took time to celebrate graduate student research and work.

Biological Sciences in Public Health Ph.D. candidate Caroline Keroack argued in a speech at the Thursday rally that graduate students cannot contribute to the study of health through their research if they are not healthy themselves.

In her speech, Keroack said she has suffered from severe depression since the age of 12. Though her condition requires weekly therapy treatment, she said she is unable to afford therapy under Harvard’s current health care plan.

“We cannot be the gears that grind forward this institution if we cannot keep ourselves physically and mentally healthy,” Keroack said.

In support of the graduate student worker strike, 18 construction laborers working on a restoration project near the Longwood picket line shut down their job site for the day.

“Being in the union you know what a strike is about and how you’re supposed to react to a strike,” he said. “I called my supervisor and he talked to Harvard and talked to the unions and it came down that we were going to have a walk out for a day so we could show our respect.”

Massachusetts Nurses Association President Donna Kelly-Williams said in an interview that Harvard’s student workers should not need to strike in order to be recognized by the University. Kelly-Williams spoke at Wednesday’s rally at Longwood.

“Harvard is so involved in medical research, and we give the greatest care in the world to patients that come to seek care here and in Massachusetts, and we’re not taking care of our own,” she said. “What kind of a message is that?”