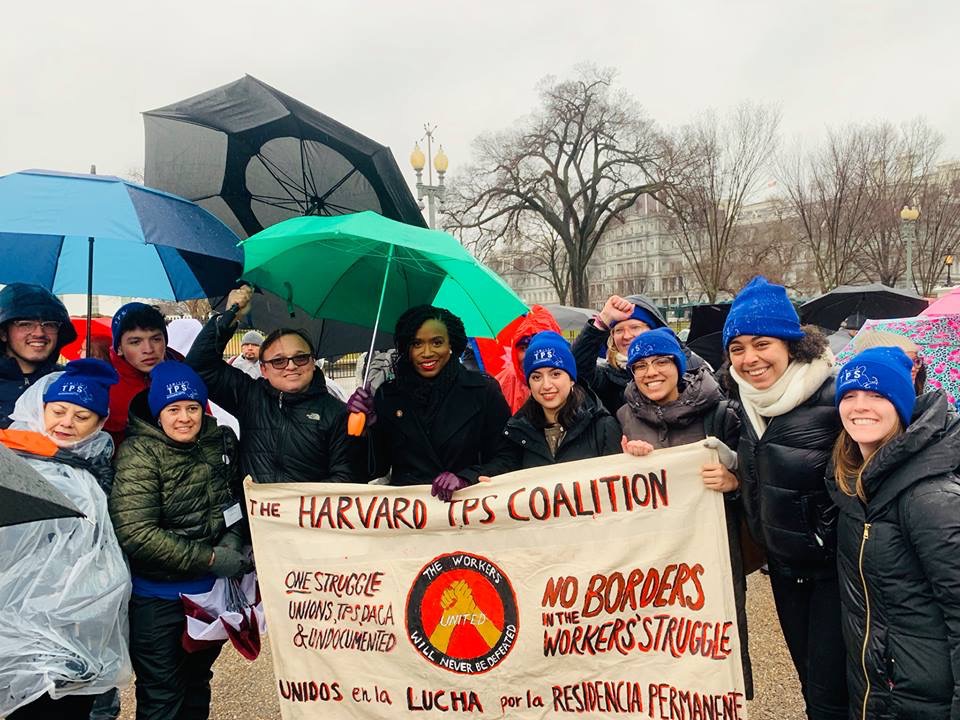 This past Tuesday, Harvard workers and students went to Washington D.C. to join a rally marching to protect Temporary Protected Status, a program that grants temporary refuge in the United States to residents of countries ravaged by conflict or natural disasters. In the rain, they gathered to fight for the basic right to stay in the United States, where many of them have spent years building new lives.

We recognize the urgency of these protests, and we admire the efforts of those involved in the Harvard TPS Coalition as part of the larger fight to protect people living in the U.S. under the TPS program. Workers and students alike have rallied repeatedly on campus, pushing for increased legal support in light of the very real danger posed to their livelihoods in the U.S. given the current political climate.

Over the course of the current administration, the TPS program and those who benefit from it have faced growing uncertainty. Though a court order has stalled the Trump administration’s terminations of TPS for individuals from El Salvador, Honduras, Haiti, Nicaragua, Nepal, and Sudan, their status still remains uncertain for the foreseeable future.

In light of these dangers and in justice to the people who have built new lives in the U.S., we echo our support for the continuation of TPS. Furthermore, we believe Harvard should work assiduously to support its employees who are TPS recipients by using its political clout to lobby Congress. The individuals affected are not only valued members of the Harvard community: They are human beings, deserving of the right to feel safe in the place where they have rebuilt their lives.

If University President Lawrence S. Bacow decides to take a more public political stance, on the issue, it will not be without precedent. Former University President Drew G. Faust, in a letter to top legislators co-written with Princeton University President Christopher L. Eisgruber, offered public support for TPS shortly before her term ended. This statement, amongst others, came after a number of protests and a petition presented to her by TPS workers earlier that year.

After Faust’s departure, the University must strive to maintain public support of immigrants, both under TPS and otherwise. In September, Bacow met with members of the undocumented community on campus, including TPS workers, but has not yet recently made a similar statement showing his support. Following his expression of sympathy for immigration issues and advocacy groups and references to his own immigration story, Bacow should show material support for the immigrants by committing Harvard’s political sway to protecting these valued members of our community.

We appreciate that Bacow has identified support for Deferred Action for Childhood Arrivals, an Obama-era immigration program designed to protect undocumented immigrants who arrived as children, as one of his main lobbying priorities. We call on Bacow to also make a specific, explicit statement advocating on behalf of those who might face terminations to TPS in the same way that Faust did during her tenure.

Bacow has the chance to reaffirm his commitment to justice for all members of the Harvard community, no matter their origins. We urge him to take it.