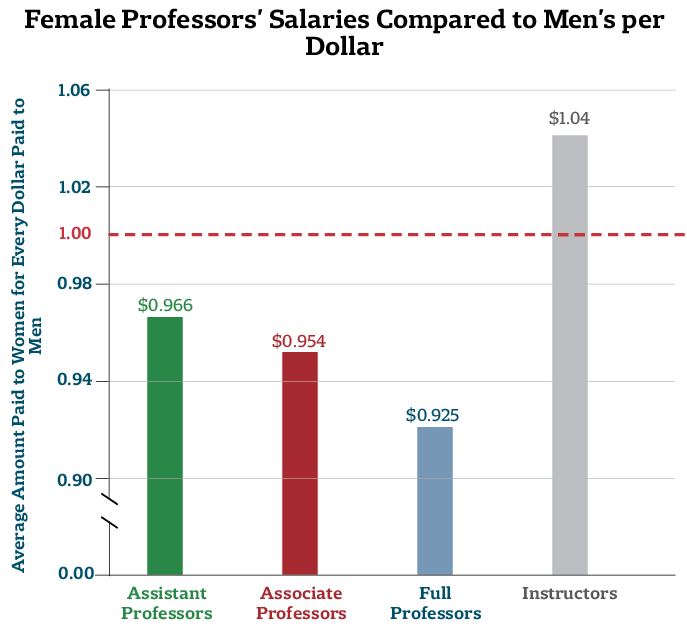 Harvard’s female tenured faculty members are on average paid 92.5 cents for every dollar their male counterparts earn, according to a recent nationwide survey on higher education compensation.

The survey, conducted by the American Association of University Professors, collects salary data across position and gender from 1,093 colleges and universities. The survey includes information about 1,019 of Harvard’s tenured professors, 144 associate professors, 217 assistant professors, and 149 “instructors” — likely referring to certain non-ladder faculty such as lecturers, preceptors, or fellows — in its tabulations, according to Inside Higher Ed, which compiled the AAUP data.

Harvard’s pay gap places it roughly in the middle of the Ivy League. While no Ivy League school has reached pay equity for tenured faculty, Brown and Yale are the closest at roughly 95 cents on the dollar on average. Dartmouth sits at the bottom at only 82.5 cents.

Gender pay disparities persist despite federal laws designed to combat discrimination. Though the 1963 Equal Pay Act and Title VII of the 1964 Civil Rights Act both prohibit gender discrimination in the distribution of salary and benefits, women continue to earn approximately 85 percent of what men earn in the United States, according to a 2019 Pew Research Center analysis. But that gap shrinks after controlling for certain factors such as profession.

Harvard fared worse in the ranking of non-tenure track faculty pay, coming in at 91st in average salary for instructors. The average compensation for these individuals — some of whom work part-time at the University — is $68,400, roughly half the amount the next highest-ranking faculty are paid.

Over the past four years, the gender pay gap among Harvard’s faculty has remained relatively constant, even as salaries have risen by roughly 15 percent. In 2015, female tenured professors at the University earned approximately 92.3 cents for every one dollar earned by a male professor on average — roughly the same as in 2019. Though the gender pay gap narrowed from 95.7 cents on the dollar in 2015 to reach equity in 2018 for associate professors, it increased again to 95.4 cents on the dollar in 2019. On the other hand, the pay gap for assistant professors has decreased steadily since 2015.

A faculty diversity survey released by the University in early April showed incremental progress in the hiring of female faculty members: 27 percent of Harvard’s tenured faculty are now women, compared to roughly 40 percent of tenure-track professors. Those figures have risen from 19 and 35 percent, respectively, since 2004, and administrators say they remain committed to continuing increasing faculty diversity.