Though much of the Faculty of Arts and Sciences has seen recent increases in the proportion of underrepresented minority tenure and tenure-track faculty, the Sciences division continues to lag behind.
By Jonah S. Berger and Ruth A. Hailu 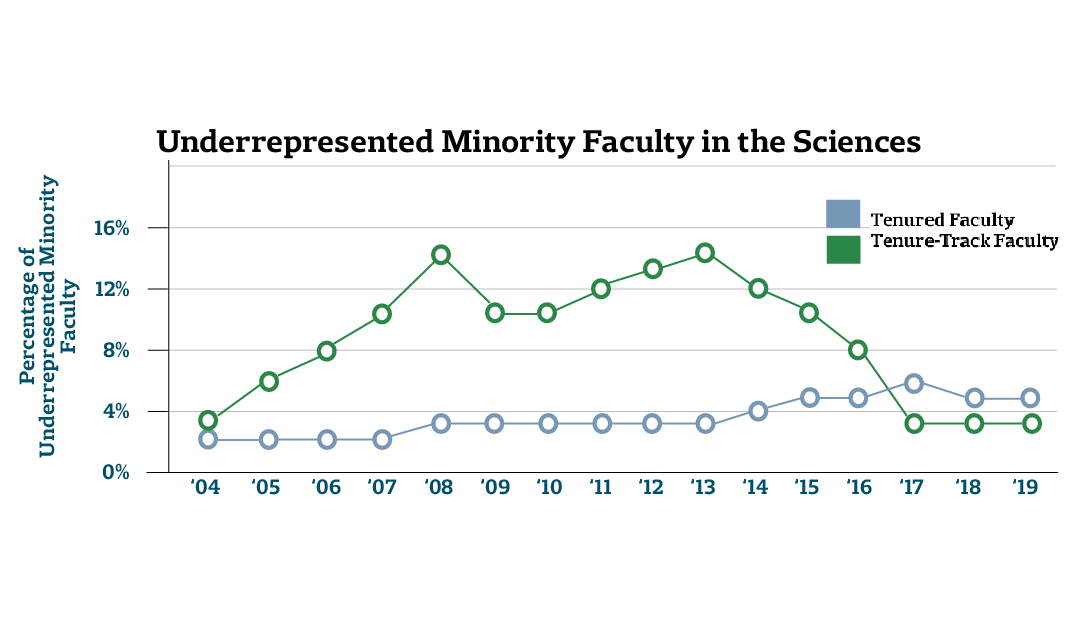 Though much of the Faculty of Arts and Sciences has seen recent increases in the proportion of underrepresented minority tenure and tenure-track faculty, the Sciences division continues to lag behind.

Students and faculty say this lack of diversity limits the perspective that faculty can add to their research, teaching, and mentorship and leaves minority students — and prospective faculty members — feeling they do not belong. Administrators acknowledge that more work remains to be done, but say they believe they are making progress in both recruitment and retainment.

An annual report on faculty diversity released last week shows that the proportion of tenured faculty in the Sciences who identify as Hispanic, African American, or Native American has remained at 5 percent when compared to 2015, whereas the rest of FAS has grown. And unlike in the Arts and Humanities, Social Sciences, and School of Engineering and Applied Sciences, the proportion of tenure-track faculty from underpresented minorities in the Sciences has fallen — from 10 percent to 3 percent — from 2015 to 2018.

As of Sept. 1, 2018, just one out of 31 tenure-track faculty members in the Sciences self-reported as an underrepresented minority. Recent hires have brought that figure up to four, according to Dean of Sciences Christopher Stubbs.

Still, over the 15-year period highlighted in last week’s report, the proportion of underrepresented minorities in the Sciences has increased — from 1.9 percent of ladder faculty in 2004 to 4.5 percent in 2019. The University’s ladder faculty comprises both tenured professors and those on the tenure track, including assistant and associate professors.

That incremental progress, though, is not enough for some students.

“The lack of diversity in the faculty for the Sciences has made me question my future more than once,” Arin L. Stowman ’19, president of the Harvard Society of Black Scientists and Engineers, wrote in an email. “While I am confident in my own abilities, not seeing people who look like me in the positions that I want to be in someday makes me question whether there will ever be any space for me.”

The lack of diversity within the sciences extends beyond Harvard. Hakim J. Walker, a mathematics preceptor, said that while he has recently observed a field-wide push towards recruiting a diverse pool of faculty, he believes there has historically been a lack of drive surrounding diversity initiatives throughout his career.

“I think that's kind of the ethos of many math departments, and many mathematicians, is we care about your talent, we care about whether or not you can contribute and gain something from the math curriculum here,” Walker said. “I think we're seeing more of a push against that in more recent years.”

The pipeline of underrepresented minority Ph.D.s remains slim. According to data released by the National Science Foundation, 27 Black and 35 Hispanic students received a Ph.D. in mathematics and statistics out of a total of 1864 recipients in 2014, amounting to 1.4 and 1.9 percent, respectively. The fractions of underrepresented minorities who have recently received Ph.D.s in other fields within the sciences are similarly low, with none above 5 percent.

FAS Dean Claudine Gay said in a March interview she believes Harvard plays a vital role in helping to expand that pipeline. For example, the University currently funds summer research opportunities for minority undergraduates across the country to attract talented scholars at an early age and encourage them to apply to graduate school.

“I don’t think there is any field in which there’s truly no pipeline, but yeah, there are some fields where in terms of the level of gender diversity, racial and ethnic diversity, it’s not as robust as we’d like it to be,” Gay said. “There are things we could be doing at Harvard to help build that pipeline.”

Stubbs outlined a number of measures the Sciences have taken to address the pipeline issue, including implementing a “Future Faculty Fellows Program” to provide better advising for minority students. The Astronomy department is also piloting a new initiative in which it has eliminated the consideration of GRE scores in graduate student admissions.

Faculty and administrators said conducting broad faculty searches and looking for young scholars from underrepresented backgrounds are key mechanisms for increasing diversity. Gay said in a March interview that seeking out prospective hires as opposed to waiting for applicants to apply is a vital component of ensuring diverse applicants are considered.

Yet ultimately, hiring decisions depend on an applicant’s body of work, according to Charles M. Lieber, chair of the department of Chemistry and Chemical Biology, who noted that his department has implemented numerous formal and informal mechanisms to ensure minority applicants are fairly considered in searches.

“It just can't be solved by just saying ‘Okay, we're going to hire “x” number of different faculty,’ because if there isn't a pool of viable, strong candidates, it is not a good thing to hire a weak candidate,” Lieber said.

An ‘Alarmingly Low Level’ of Diversity

The School of Engineering and Applied Sciences — one of the few schools currently increasing its faculty ranks due to recent donations and its upcoming expansion into Allston — offers a counterpoint. Nineteen percent of SEAS’s tenure-track faculty are underrepresented minorities, compared to six percent in the life sciences and zero percent in the physical sciences as of September 2018.

The disparity between the proportion of tenure-track faculty in the sciences at Harvard compared to engineering could in part reflect differing levels of support at the undergraduate level, according to some faculty and administrators. Without support at the undergraduate level, students may feel limited in their ability to pursue an academic career in the sciences, creating a vicious cycle.

“You need the right number and type of people with the initiative — and the time honestly — to form a group, make it a strong presence on campus, and sustain [it],” Walker said.

SEAS has recognized chapters of both the National Society of Black Engineers and the Society of Hispanic Professional Engineers, while the College does not have any student groups dedicated exclusively to serving underrepresented minorities in the sciences.

The Black Premedical Society caters to black undergraduates seeking to pursue a career in medicine and the Harvard Society of Black Scientists and Engineers serves all black STEM students at the College.

Stowman said that the need for HSBSE stems from Harvard’s lack of support for minority students.

“Ideally, the university would already be providing multiple levels of support to black students studying STEM knowing the history that exists and that has kept black people out of STEM,” Stowman said. “However, because those options do not yet exist, it is up to organizations like HSBSE to provide for students.”

FAS spokesperson Anna G. Cowenhoven declined to comment on criticisms about Harvard’s lack of support for students and faculty diversity.

Dean for Faculty Affairs and Planning Nina Zipser acknowledged that certain fields, such as mathematics, could “put more effort” into developing outreach programs such as those already available in engineering and physics.

Ifeoma E. White-Thorpe ’21, the founder of the Black Premedical Society, wrote in an email that she believes the lack of diversity among faculty affects the curriculum of science classes at Harvard.

“I can only assume a lack of institutional support across the board for Black premedical students aids in this problem of underrepresentation,” she wrote. “I would highly encourage Harvard to consider how adding minority voices to its faculty could enhance our perspective on medicine and could aid in generating a future force of well-rounded, diverse doctors.”

Several students and faculty commended initiatives SEAS has taken to promote diversity and minority recruitment, including the hiring of a director of diversity and inclusion, Alexis J. Stokes. SEAS has also begun to require incoming faculty to submit a “diversity statement” as a part of their application and now offers diversity-related trainings for faculty and staff.

Gay said in March that she plans to “study” the success of those initiatives before deciding whether to roll them out on a broader scale.

Rahel M. Imru ’21, incoming president of HSBSE, wrote in an email that while she agrees that engineering has become more diverse, she still believes black students are not “properly represented” in either engineering or the sciences.

“I have noticed that SEAS is more diverse than the life and physical science departments, but from what I see, I still do believe that the number of Black faculty members is at an alarmingly low level in both,” she wrote.

Outside forces and internal constraints could inhibit efforts to further diversify the faculty, according to some administrators and department chairs.

After the 2008 recession, FAS instituted a hiring freeze. Though FAS resumed normal hiring practices several years later, the school still faces limits in the number of faculty it can hire every year. FAS generally must wait for a tenured faculty member to leave before hiring a new member.

Currently, the faculty turnover each year across the University stands at roughly 70, only half of whom are in the Faculty of Arts and Sciences, according to Senior Vice Provost for Faculty Development and Diversity Judith D. Singer. The lack of turnover limits opportunities to diversify the school.

The historically racially homogenous makeup of FAS could also affect its ability to hire faculty from underrepresented backgrounds, according to multiple department chairs in the Sciences.

Lieber said some of his “senior colleagues” once had “very different views” about the importance of diversity in the sciences, though many have since changed their views. Still, he and others said they remain cognizant of implicit biases when hiring new faculty.

“There can be hidden biases because of how you’re brought up, what time you're brought up, if you don't make an effort to, you know, learn about things,” Lieber said.

Venkatesh Murthy, chair of the Molecular and Cellular Biology department, said the low diversity figures among science faculty could in part be contributing to a self-perpetuating cycle, in which prospective hires are unwilling to “take a chance” with a department lacking individuals who share similar backgrounds.

“The existing palette of people here clearly makes an impression,” he said. “If we’re all male, we're all a certain kind, then it becomes more difficult even if we convey verbally or maybe even through actions, that we are welcoming.”

The departure of even one of a few underrepresented minorities can have an immediate and lasting effect on faculty demographics, Lieber said.

He cited the case of chemist Alán Aspuru-Guzik, who won numerous awards after joining the faculty in 2006. Asparu-Guzik — who identifies as Hispanic — told The Crimson last year that he left Harvard to take a position at the University of Toronto due to “uncertainty” about his future in the wake of the election of President Donald Trump.

“Because you're working with small numbers, these percentages can fluctuate quite a lot, at least in our department,” Lieber said. “You try to bring up a young faculty, and then factors out of your control can change things.”