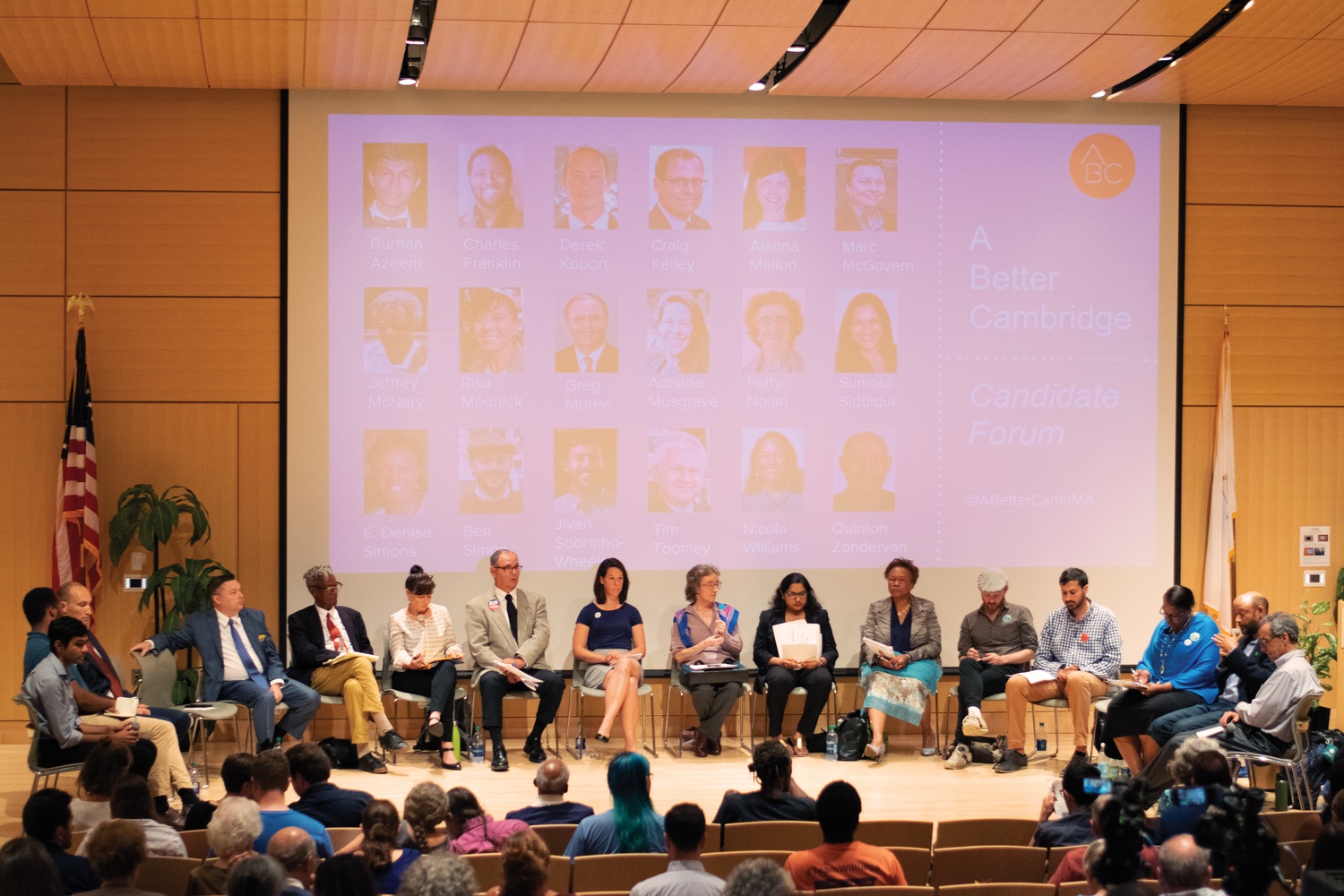 The event — held in the Cambridge Public Library — was hosted by A Better Cambridge, a nonprofit organization that aims to increase affordable housing and tenant protections in Cambridge. In order to participate, both new and incumbent candidates were required to complete a questionnaire on affordable housing issues facing the city.

ABC Co-Chair Alexandra Markiewicz said the goal of the forum was to foster an “informed discussion” on housing before the election in November.

“We wanted to put the forum on as an opportunity to educate voters about what candidates feel on housing and what they think they would want to do to really address our housing crisis problems,” she said.

Jeffrey McNary criticized past policies for not doing enough to address the crisis, and said more should have been done.

“This housing crisis just didn't jump out of the Charles River like ‘The Creature From the Black Lagoon’ — this has been here for a long time,” he said. “And if you didn't see that and plan for that, then you have got to own that.”

First-time candidate and recent MIT graduate Burhan Azeem said rising rents have forced him to consider leaving Cambridge. He said the possibility was “haunting” to him as a resident.

In a Monday meeting, the City Council unanimously voted to table the proposal after it became clear that they would not have enough votes. Tabling the measure brought an anticlimactic end to months of heated debate among councilors and residents alike. The council left open the option to revisit the proposal after it expires.

“We’re all committed to building more affordable housing,” he said. “And again, it’s really important that we get it right. And in order to do that we need more time to address all the different parts.”

In addition to addressing the overlay, candidates also discussed original plans for addressing housing issues. Candidate Adriane B. Musgrave said she would work to increase parking availability and commit $20 million to affordable housing each year, calling funding a “major limitation.”

“We are an incredibly well-off and wealthy city, we are a high opportunity city, it is our collective responsibility to make sure that others who start off with less have access to live here,” she said.

Three candidates — John Pitkin, Sukia Akiba, and Ilan Levy — and Councilor Dennis J. Carlone failed to complete the mandatory questionnaire and were not invited to the forum. Councilor Timothy J. Toomey was invited, but did not participate.

Pitkin said he did not agree with their decision to keep him from the forum.

“I shouldn't have to answer their questions in order to participate in a public forum. That's odd,” he said. “They have the right to ask whatever questions they want, if they want to make endorsements. But I decided when I saw their platform that it wasn't something I was going to seek.”

Markiewicz responded to the criticism by saying she understands the complaint, but that the guidelines were “clearly delineated.”

“I completely understand that a candidate would be frustrated by not not being able to speak on a forum on one of the most important issues in the city,” she said. “But also, we have to respect the fact that we laid out the rules for everyone. We want to follow through with that.”

A Better Cambridge Action Fund, the political affiliate of ABC, plans to announce endorsements in the council race within the next week, according to Markiewicz. She added that the group will make these endorsements by weighing both candidates’ records as well as responses to the questionnaire.