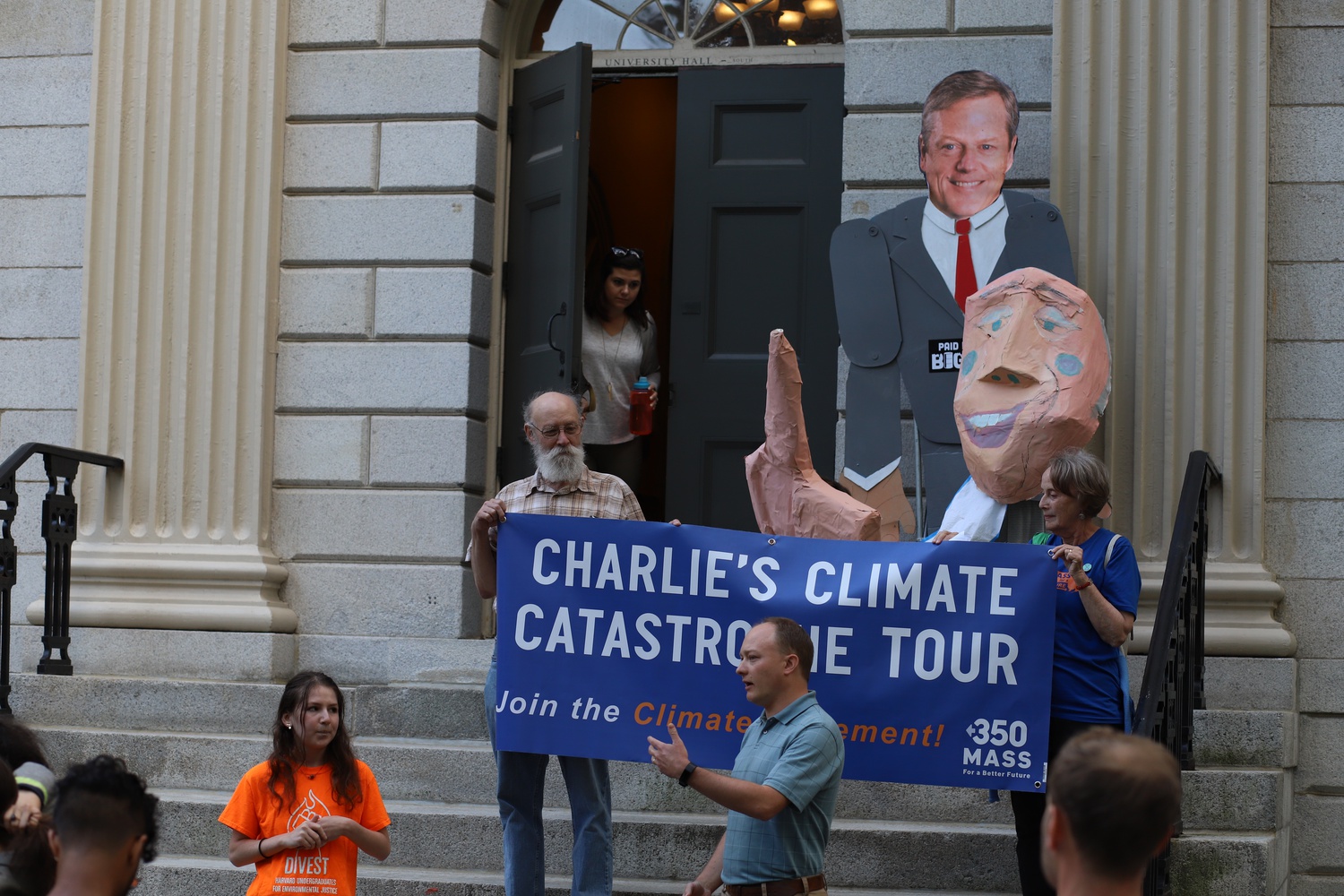 Members of Divest Harvard and 350 Mass for a Better Future joined together on the steps of University Hall to host a mock press conference with figureheads of University President Lawrence S. Bacow and Mass. Governor Charlie Baker. By Camille G. Caldera
By Aidan F. Ryan, Crimson Staff Writer

The groups held a 30 minute-long mock press conference featuring puppets depicting Bacow and Baker; members of both groups acted as assistants to criticize what they say has been the leaders’ inaction on climate change issues, including Harvard’s financial ties to the fossil fuel industry.

Craig S. Altemose, executive director of Better Future Project — a Cambridge-based climate group that oversees the 350 Massachusetts group, stood as Baker’s “assistant” as members of Divest Harvard and 350 Massachusetts asked questions like “Why won’t you guys divest?” and “How many more cases are you prepared to lose?” referring to court cases filed against the Massachusetts government regarding environmental issues.

The event Tuesday is part of a tour 350 Massachusetts is taking around the state — dubbed “Charlie's Climate Catastrophe Tour” — to criticize the governor for being a “climate failure” in the wake of the Sept. 20 climate strike.

“When he came into office, he largely has continued many of the policies that the [Deval] Patrick administration set in motion, but hasn't really called for any deepening of ambition in any really big way,” Altemose said.

Spokespeople for Baker did not respond to multiple requests for comment Tuesday evening.

Despite criticisms, Baker has not been silent on climate change issues, calling for a tax hike on real estate sales to raise money to combat climate change in June. The Republican governor testified before a Congressional committee in February, calling on the federal government to take significant action in response to climate change.

Divest Harvard member Ilana A. Cohen ’22 spoke on behalf of the group — which advocates for the University to divest its endowment holdings in the fossil fuel industry — along with Altemose.

“We've been demanding that Harvard University disclose, divest and reinvest its fossil fuel holdings by Earth Day 2020 for a while,” Cohen said.

“But this is a promising sign seeing these figures, our very own governor and University president out here,” she added, referring to the puppets.

University spokesperson Jonathan L. Swain referred to previous statements regarding Harvard’s position on divestment. Most recently, Bacow published an article in Harvard Magazine articulating his view on climate change and how to combat it.

“We may differ on means. But I believe we seek the same ends—a decarbonized future in which life on Earth can flourish for ages to come,” Bacow wrote.

On coming together for Tuesday’s event, Altemose said his group has been a “longtime supporter” of the Divest Harvard movement and saw an opportunity to collaborate.

“I think we just noticed some parallels between both Governor Baker and President Bacow not really living up to the leadership that's demanded of them in this moment,” he said.