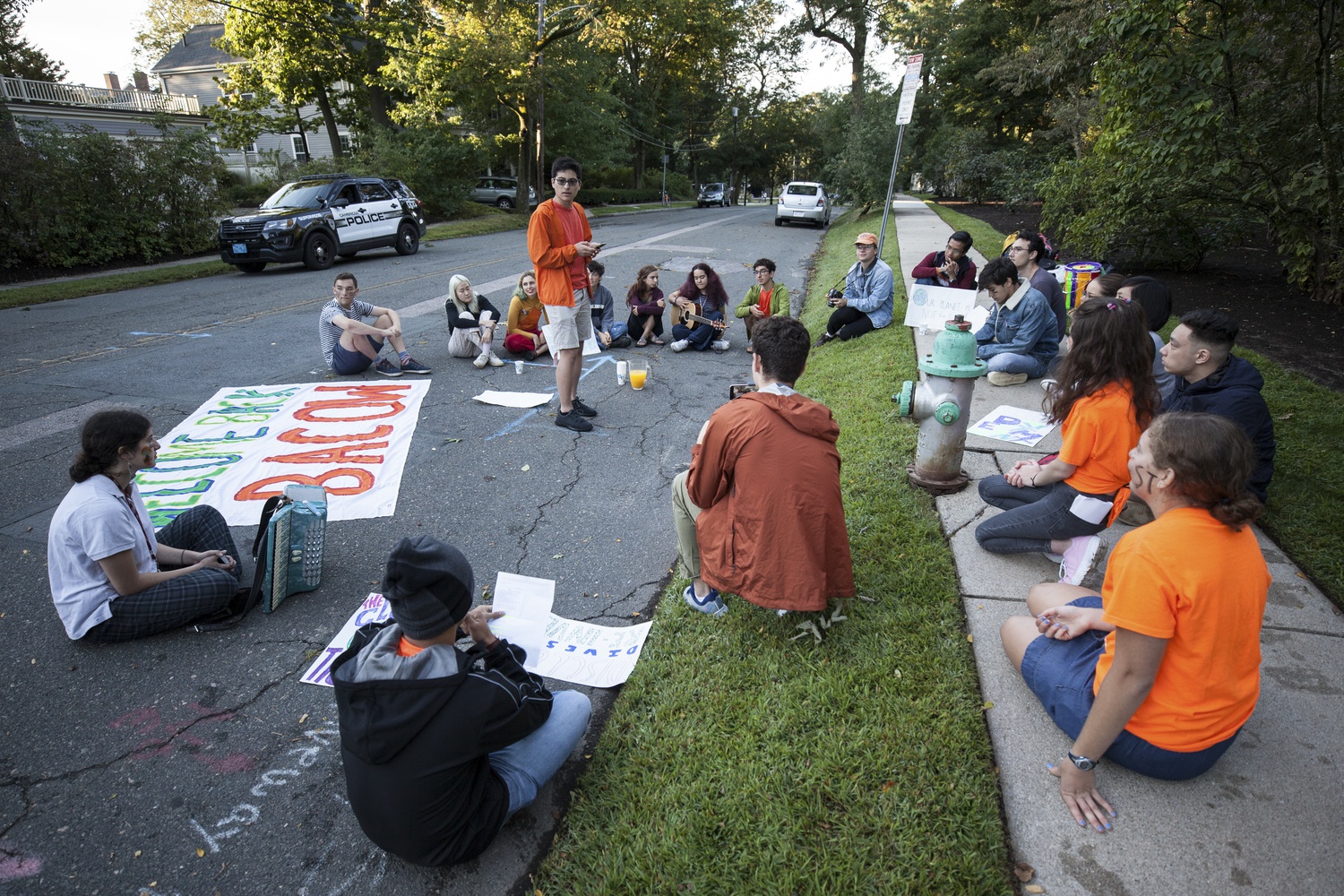 Divest Harvard — a group that advocates for the University to withdraw its endowment holdings from the fossil fuel industry — sang songs, read poems, and chanted in front of Elmwood, the University president’s historic residence. The group stayed for two hours before walking to Massachusetts Hall, which houses Bacow’s office.

Divest Harvard member Ilana A. Cohen ’22 said the rally was inspired by their goal of bringing “creativity, artwork, and life” to their activism.

“Thinking about climate change a lot of the time can be depressing,” Cohen said. “Ecological grief is a very, very real concept.”

Georgia K. Bowder-Newton ’21, another Divest Harvard member, said she participated in the rally because she was excited to take part in “joyful” activism, even if she noted its eccentricism.

“I was really excited about the prospect of absurdity in this event,” Bowder-Newton said.

“We’re at the richest university in the world, one of the most powerful spaces in the world. That we’re still continuing to invest in the destruction of our own planet and our own people and that we’re outside of Bacow’s house right now, with pancakes and orange juice, it was just really exciting,” she added.

University spokesperson Jonathan L. Swain wrote in an emailed statement that the school concurs with the urgency of climate change and the need to eliminate the use of fossil fuels in the world but does not support divestment.

“While we agree on the urgency of this global challenge, we respectfully disagree with divestment activists on the means by which a university should confront it,” Swain wrote. “Universities like Harvard have a crucial role to play in tackling climate change and Harvard is fully committed to leadership in this area through research, education, community engagement, dramatically reducing its own carbon footprint, and using our campus as a test bed for piloting and proving solutions.” 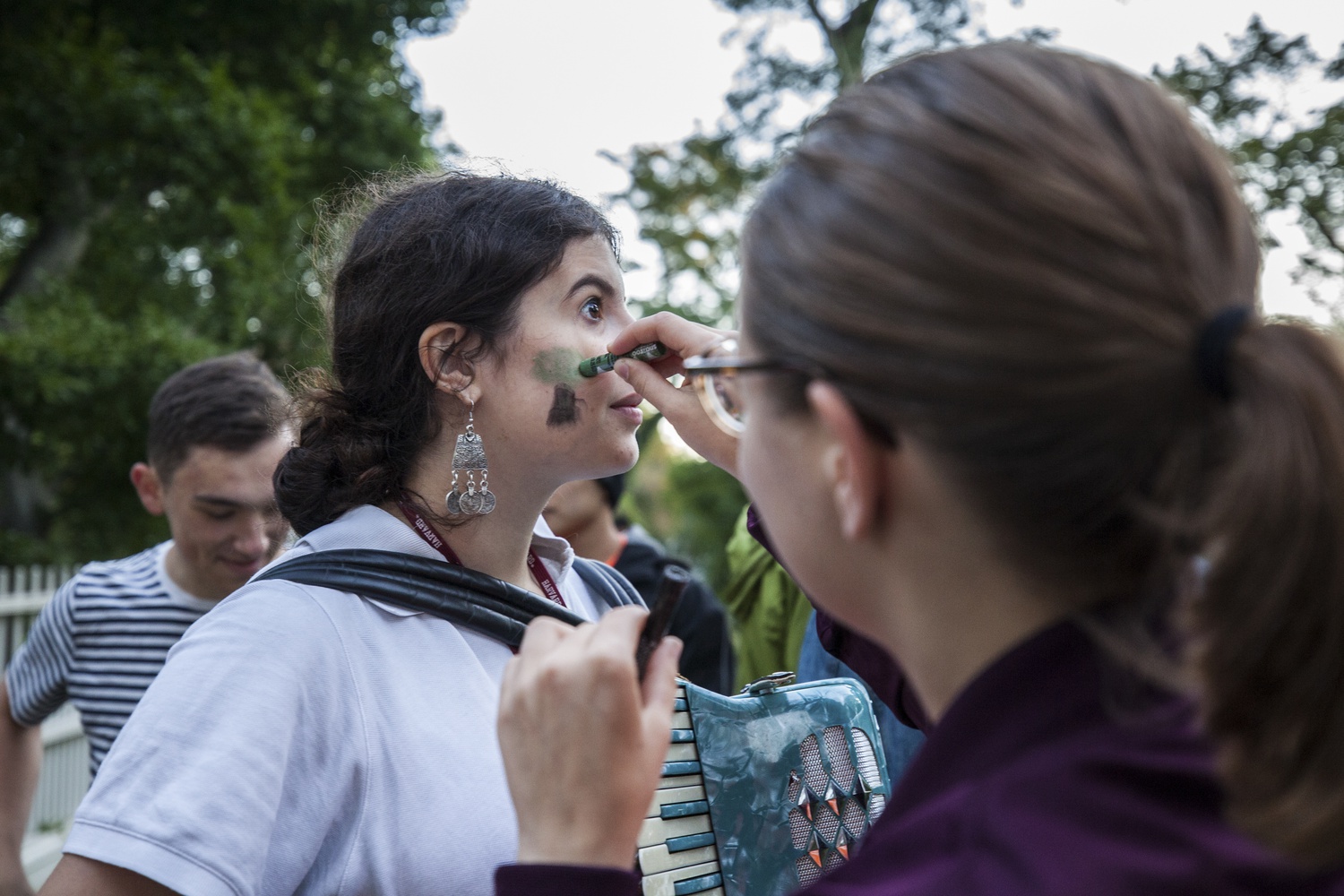 Several freshman who recently joined Divest Harvard attended the protest and said they were eager to participate in the early morning event.

Jeromel Dela Rosa Lara ’23 said he was impressed by group members’ “passion” and was excited to be a part of the demonstration.

“With this group, I kind of felt more empowered, emboldened to challenge the administration, to challenge the status quo, and to bring forward this important issue that they need to hear about,” Lara said.

The group dedicated part of the summer to recruiting interested incoming freshmen for the rally and other start-of-semester events, including Freshman Convocation.

Connor P. Chung ’23 said he participated in the Thursday rally because he believes climate change is an issue for his generation and generations after him.

“When we’re running out of time to make a difference, it’s essential that students all around the country and world speak up to say, ‘Hey, this is something that really matters to us,’” Chung said.

Cohen said Divest Harvard plans to continue its activism as long as the climate threat looms.

“We can’t just go about our lives going to class every single day,” Cohen said. “We can't just be university presidents living in our very nice houses and going straight into our offices and Mass. Hall. We all have to take responsibility as active participants in building a more just and stable society.”