Harvard Launched Sweeping Changes to Undergrad Education This Semester. Here’s What You Need to Know.

As returning students begin another year at Harvard, many will confront different requirements for completing their degrees than those in effect when the graduating class left last spring.
By Jonah S. Berger and Molly C. McCafferty 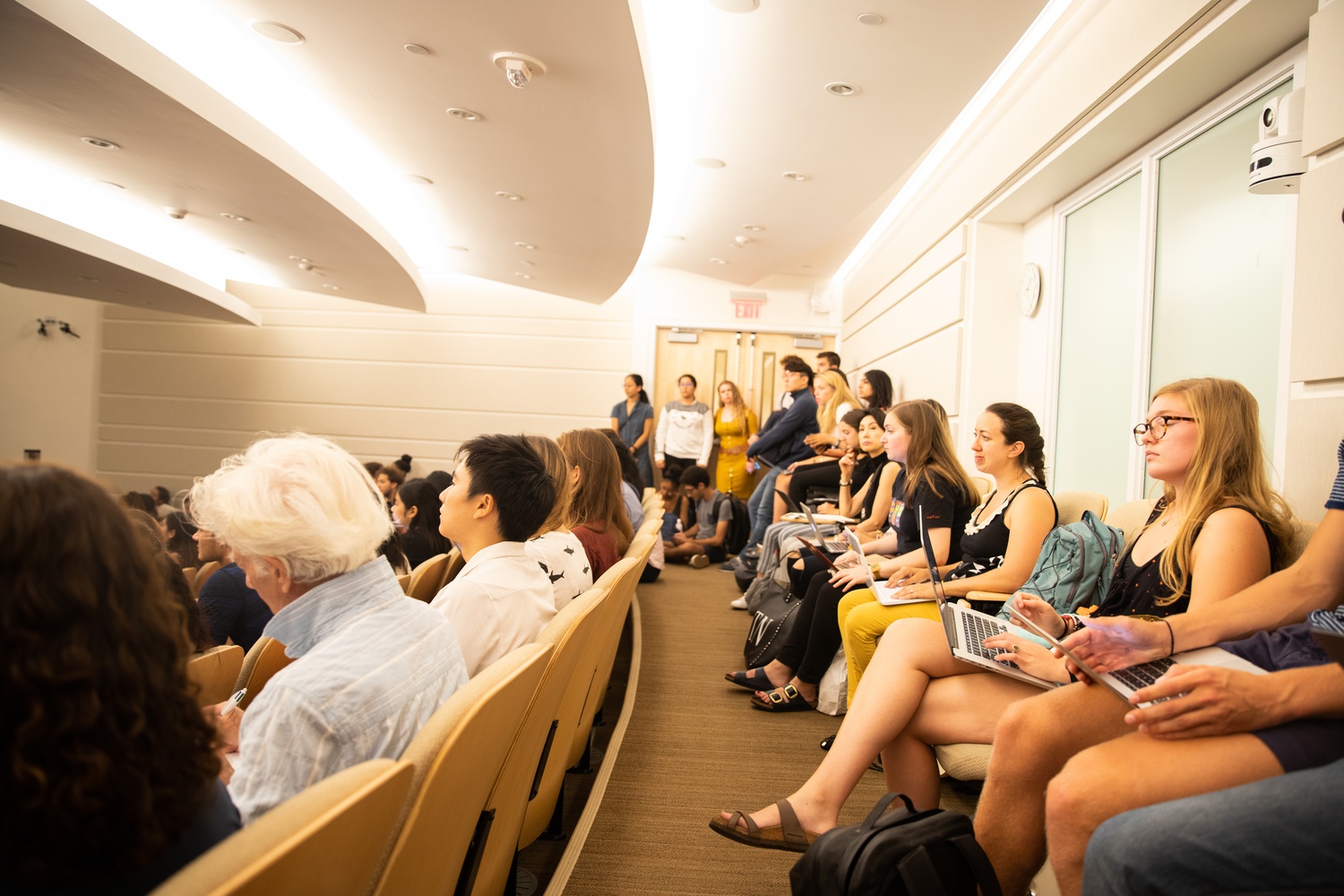 Students crowd into a lecture hall in William James to shop GENED 1154: "The Science of Happiness." By Amanda Y. Su

As returning students begin another year at Harvard, many will confront different requirements for completing their degrees than those in effect when the graduating class left last spring.

Those changes — including a revamped General Education program and a new data course requirement — will affect students differently depending on their class year. Though many administrators and professors have praised the changes, the rollout has also sparked confusion among some undergraduates as they attempt to navigate the new requirements.

Course registration closes Monday, so here’s a primer on the new requirements and how students can fulfill them.

What are the new Gen Ed requirements?

The most significant change to undergraduate education is the debut of the College’s new Gen Ed program, the final phase of an overhaul four years in the making.

What prompted the new program?

The road to the new program began in 2015, when a committee of professors reviewed the College’s program in Gen Ed and published a report declaring it to be “failing on a variety of fronts.”

In response, the Faculty formed a committee to recommend changes to the program and voted to approve an overhauled system in May 2016. But the rollout of the new program proved complicated, at one point being pushed back a year later than originally announced to give professors more time to develop courses and to solicit student feedback.

Dean of Undergraduate Education Amanda J. Claybaugh wrote in an email that the new system is meant to simplify the Gen Ed requirements and offer a wider array of options to fulfill them.

“Over the last few years, the rules governing Gen Ed were quite complex, but now students need to know only this: you take one (great) course in each of the four Gen Ed categories,” Claybaugh wrote.

Who is affected by the changes to the Gen Ed program?

Current sophomores, juniors, and seniors will be able to use former Gen Ed courses as well as new ones to fulfill their requirements, while freshmen will follow the new requirements exclusively.

Several professors who taught Gen Ed courses under the previous program have had to retool their classes to fit the new program. Some courses, including popular standards Culture and Belief 23: “From the Hebrew Bible to Judaism,” have been eliminated altogether.

History of Science lecturer Soha Bayoumi, who is teaching a new Ethics and Civics course, said she and other faculty have been “operating with a lot of uncertainty” as the semester begins and they find their footing within the new program.

“I'm very fortunate that the Gen Ed program has a lot of embedded supports to support faculty who are developing new courses or revising old courses,” she added.

What is the Quantitative Reasoning with Data requirement?

While most of the changes to the Gen Ed program were decided upon in 2016, the Faculty voted last semester to finalize the last piece of the puzzle: the Quantitative Reasoning with Data requirement.

A class must prompt students to “think critically about data” to count, according to the original Faculty committee proposal for the requirement.

Students in the classes of 2020, 2021, and 2022 can choose to fulfill the new requirement if they wish, or they can take a class that fulfilled the previous Empirical and Mathematical Reasoning requirement instead. Under the previous criteria, mathematics-heavy classes without a significant data component counted towards the requirement. For instance, ECON 1010A: “Intermediate Microeconomics” will not fulfill the Quantitative Reasoning class but fulfilled the Empirical and Mathematical Reasoning requirement.

“We have courses at all levels, from the most introductory to the most advanced, and in an array of disciplines, taught by faculty who are really committed to the work of helping students think critically about data,” Claybaugh wrote.

What happened to Advanced Standing?

Previously, undergraduates seeking to obtain a master’s degree while at the College could choose to activate an academic program called Advanced Standing, which allowed those who completed enough advanced coursework in high school to enter Harvard with a year of college credit. Students could then choose to earn a bachelor’s degree in three years or both a master’s and a bachelor’s in four.

That program was axed in favor of a new “concurrent degree program” starting this semester.

Unlike Advanced Standing, the new program has no high school prerequisites — any student can apply to obtain a master’s degree in four years. Participants will double-count four undergraduate courses towards that master’s degree while also taking classes at the Graduate School of Arts and Sciences. The three-year bachelor’s degree option, meanwhile, was eliminated.

Though the program begins with students in the Class of 2022 and beyond, current juniors and seniors who did not qualify for Advanced Standing but are “uniquely qualified” can petition to apply, according to a proposal voted upon by the Faculty in March.

But for those considering opting into the new program, Claybaugh cautioned against thinking of it as merely the “highest of the hoops they might jump through.”

“It's *one* way that a student might shape an academically rigorous experience at Harvard, but it's not the only way, nor is it necessarily the best,” she wrote.

Is Shopping Week changing, too?

In short, the answer is no.

Shopping week, the scheduling quirk which allows students to sample classes at the beginning of the semester prior to enrolling, will remain the same for the foreseeable future.

Despite considerable debate last year among faculty members and statements from administrators that shopping week could be ditched in favor of a pre-registration system, the Faculty will not make any changes until at least 2022.