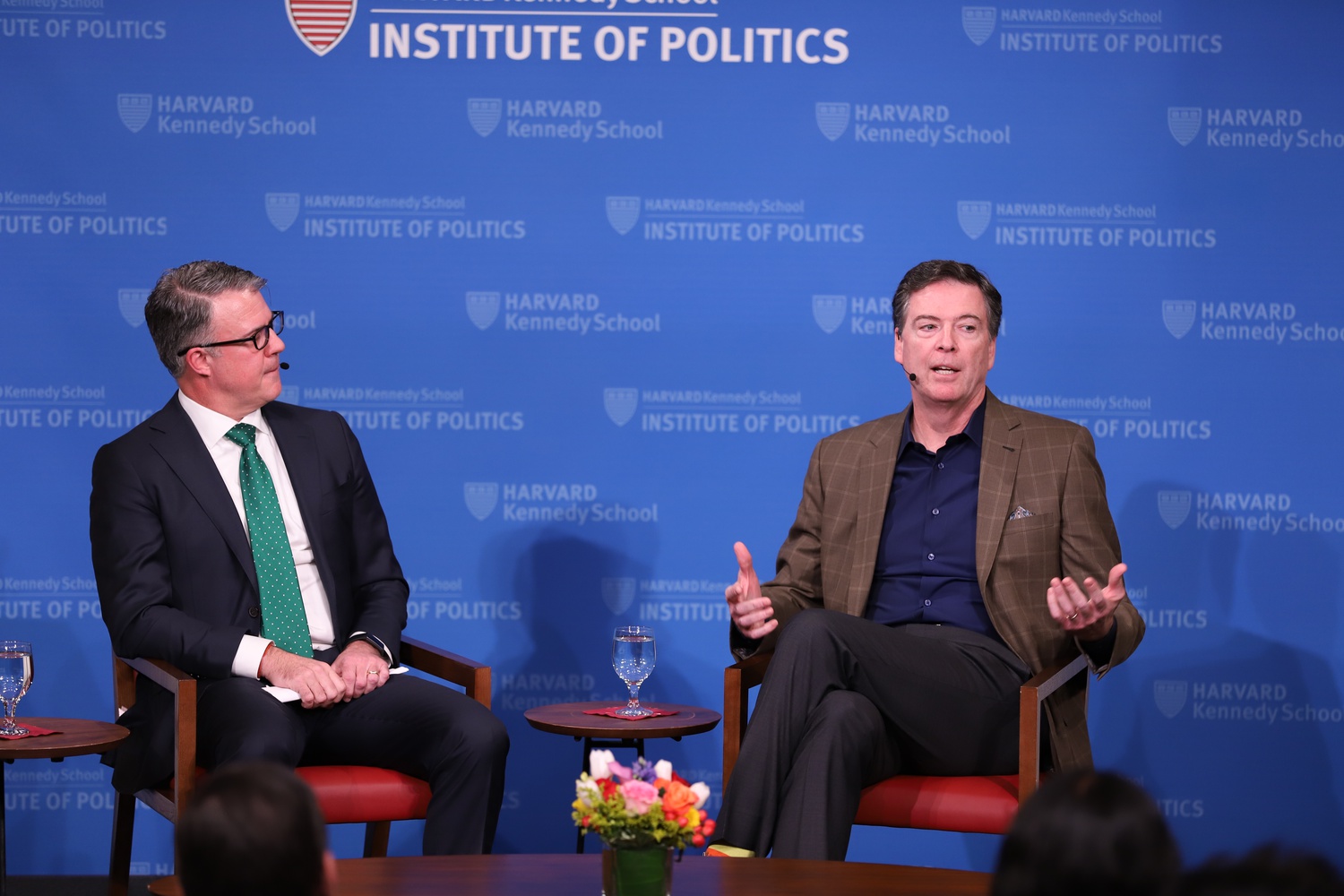 James B. Comey, the former director of the Federal Bureau of Investigation who was fired by President Donald J. Trump in 2017, defended his controversial tenure as head of the FBI at a Harvard Institute of Politics forum Monday night.

In a more than hour-long discussion with Eric B. Rosenbach, co-director of the Harvard Kennedy School’s Belfer Center, Comey acknowledged that decisions he made in handling investigations into Trump and 2016 Democratic presidential nominee Hillary Clinton “hurt the FBI.” However, he insisted repeatedly during the discussion that he made the best possible choices given the situations he was in.

“Decisions that I made hurt the FBI — and that’s important,” Comey said in response to a question from Rosenbach about public trust in the Bureau. “I still believe if I had chosen the other door, I would’ve hurt the FBI worse. But there’s no doubt, I knew we were spending the FBI’s credibility.”

Less than two weeks before Election Day 2016, Comey sent shockwaves through the political sphere when he reopened an investigation into Clinton’s use of a private email server while she served as Secretary of State under then-President Barack Obama.

Comey has also drawn criticism for publicly assailing Clinton as being “careless” during a July 2016 press conference during which he announced the FBI would not recommend charges against her.

Following her loss to Trump, Clinton publicly said Comey was a factor in her defeat. Asked by audience member Benjamin B. Bolger whether he would apologize to Clinton for his actions, Comey said he would not.

“If you really understand the position we were in — that I was in — on October 28, you walk away saying, ‘Oh my god, that was a very hard decision,’” Comey said. “So I’d want her to understand that.”

Comey said he has never met Clinton, but added it was “painful” for him that she wrote in her book she had been “shivved” by him.

Asked by an audience member if he would have written a different report than former Special Counsel Robert S. Mueller III, who investigated Russian interference in the 2016 election, Comey assented.

“If I had to do it over again in the benefit of hindsight, I would either not include any of the facts about obstruction or lay them all out and make the accusation,” Comey said.

He added that he also would have tried to “communicate in a way that Americans consume information today,” as opposed to a 448-page report, which Mueller released to the public last April.

In his report, Mueller found 10 actions by Trump that could have constituted obstruction of justice, but he declined to make a determination as to whether or not Trump broke any laws.

“What we have to do in places like the FBI is simply sensitize the academic community to know everyone’s not a friend, and some people want to collaborate to develop better ideas — better formulas — but some people are working for an adversary to steal your stuff,” Comey said, though he added he was not familiar with Lieber’s case.

Experts told The Crimson that Lieber’s arrest was part of an ongoing crackdown on academic espionage.

“I’m still skeptical of the decisions that he made, but I think that I leave with a more positive impression of him as a person,” Guetzloe said.

Comey, who published a best-selling book in 2018, said at the event he was satisfied with his actions as FBI director.

“I’m really proud of the way we conducted ourselves,” Comey said.