Political campaigns advocating for divestment and admissions changes in Harvard’s Board of Overseers elections date back over 40 years.
By Michelle G. Kurilla and Ruoqi Zhang 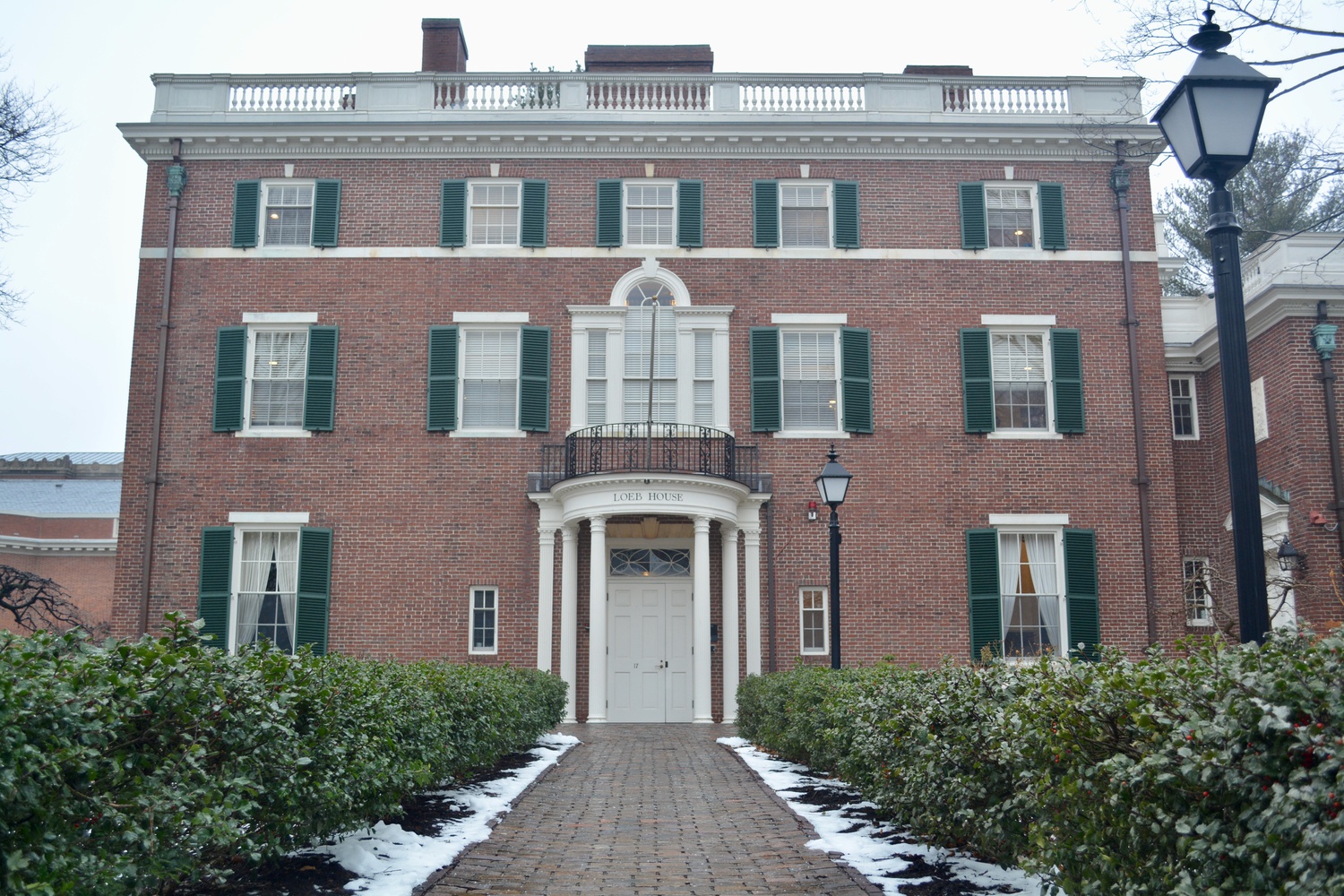 The Board of Overseers often meets at Loeb House. By Jenny M. Lu

In Harvard’s annual Board of Overseers elections, political campaigns advocating for divestment from controversial industries, eliminating tuition cost, and admissions changes date back over 40 years.

Harvard degree holders are elected to the Board of Overseers — the University’s second highest governing body — through an election scheduled every spring. To be listed on the ballot, candidates can either be selected by a Harvard Alumni Association nomination committee or secure sufficient petition signatures from eligible voters. Members of the Board serve six-year terms.

Overseers can influence Harvard’s strategic decisions, review University schools and programs through a periodic visitation process, and approve the election of members of the Harvard Corporation — Harvard’s highest governing board.

This year’s election for the Board of Overseers presented a slate of young alumni, backed by student and alumni group Harvard Forward, who are campaigning for fossil fuel divestment and increased recent alumni representation on the governing board.

Though the group’s five candidates were not selected by Harvard’s nomination committee, Harvard Forward later collected more than 4,500 petition signatures for each of its candidates. Roughly 3,000 signatures were required to nominate a Board of Overseers candidate by petition this year.

Harvard Forward is not the only advocacy organization that has strategized within the annual Board of Overseers election to advocate for its causes. Advocacy groups including the Harvard-Radcliffe Alumni Against Apartheid and “Free Harvard, Fair Harvard” backed their own Board of Overseers tickets in the 1980s and 2016, respectively.

Organizers for these groups, however, faced difficulties getting their candidates on the ballot — a challenge that members of Harvard Forward said they are facing today.

Beginning in 1986, the Harvard-Radcliffe Alumni Against Apartheid group, or the HRAAA, nominated candidates for the Board of Overseers with the goal of electing overseers who would encourage the University to end South African-related investments. Their campaign endorsed candidates for more than five different election cycles.

Donald M. Solomon, the former executive director of HRAAA, said that the nominating policy changed after the first election the group participated in.

“After the first election — which we ran petition candidates — I do remember Harvard changed the requirements and made it more difficult to get candidates on the ballot,” Solomon said.

He said that though he could not recall the exact changes, HRAAA had to work harder to get people on the ballot.

“At that time, we didn’t have online organizing opportunities,” Solomon said. “Whatever we did was mostly through direct mail and that made it expensive to run any sort of petitioning campaign.”

In 1989, Tutu won a seat on the Board of Overseers after petitioning for his nomination. Tutu was a longtime critic of the University’s investment policies in South Africa, and in 1984, he urged Harvard to divest from South Africa-related investments.

In 1991, to make its slate of candidates more competitive and condense its pool of endorsements, the HRAAA only nominated three candidates for the election. Among the candidates HRAA nominated in 1991 was former U.S. President Barack Obama, a fourth-year Harvard Law School student at the time.

“Desmond Tutu was — I think — the most successful [election],” Solomon said. “I think our feeling was that we probably couldn’t duplicate that in terms of having a recognizable big name. Obviously, we knew Barack Obama was a talented person but we didn’t anticipate that he’d become President.”

2016 brought a controversial campaign and further changes to the eligibility requirements of candidates running for the Board of Overseers.

That spring, a contentious ticket called “Free Harvard, Fair Harvard” – which included former U.S. presidential candidate Ralph Nader – ran for the Board on two central platforms: terminate undergraduate tuition, and scrutinize Harvard’s admissions policy, which the group contended was discriminatory to Asian Americans and antithetical to diversity. The group also called on Harvard to make more data public about the processes by which the College admits students.

A group of nearly 500 alumni formed to oppose “Free Harvard, Fair Harvard.” The group, called “Coalition for a Diverse Harvard,” denounced the proposals by the campaign.

Former University President Drew G. Faust criticized “Free Harvard, Fair Harvard’s” platform in a 2016 interview with The Crimson, during which she denounced the idea that eliminating the University’s tuition would make Harvard more accessible to students.

The increase was adopted because the necessary number of signatures required to nominate candidates had not changed significantly in over a century, according to a 2016 statement from the University.

“This increase was adopted in view of such factors as the magnitude of alumni support considered appropriate to qualify for the ballot; the fact that in recent years the number of required signatures—just over 200–has been barely more than what was required a century ago, when there were around 20,000 alumni eligible to vote,” the announcement reads.

With the increase in the required number of signatures, the University changed the voting process itself by transitioning to a secure online system to vote for candidates instead of having alumni submit official watermarked forms.

Kenji Yoshino ’91, who served as the president of the Board of Overseers for 2016-2017, said in an announcement at the time that the Board was pleased to move its voting process online.

“We’re pleased to move to online voting, which alumni around the world have asked us to adopt,” Yoshino said in the announcement. “We will make this change as soon as we can put a secure and reliable system in place.”

University spokesperson Christopher M. Hennessy wrote in an email Thursday that the school started online voting “to provide greater and easier access for more alumni around the world to participate in the process.”

After past insurgent Board of Overseers campaigns drove up nominating thresholds, Harvard Forward faced its own challenges to get its candidates on the ballot.

Each of Harvard Forward’s candidates received more one thousand signatures above the requisite number, according to a press release from the group last week.

“The final signature count, pending verification from the Office of the Governing Boards, consists of nearly 1,400 online signers and more than 3,400 unique in-person signers,” the press release stated. “As each candidate must be nominated individually, the campaign ultimately collected over 20,000 separate signatures.”

Harvard Forward’s Campaign Manager Danielle O. Strasburger ’18 wrote in a press release that the milestone was reached despite alumni difficulty with the online nomination process.

“We reached this milestone despite hundreds of alumni encountering real difficulties with Harvard’s complex online nomination process,” Strasburger wrote in the press release. “By our estimates, almost 1,000 additional alumni were unable to submit their nominations because of the poor design of the system.”

The University is dedicated to assisting the school’s alumni network, Hennessy wrote in an email Thursday.

Eligible voters could submit their signatures either through the online form or a paper document. Strasburger wrote in a press release that Harvard Forward organizers directed their efforts to acquire more paper petitions from alumni.

“Of course, switching our focus toward using paper petitions required that we build and mobilize a large network of volunteers and supporters around the world,” Strasburger wrote. “They will continue to be the driving force of this campaign as we prepare for the coming election.”

Harvard has received the nomination forms, Hennessy confirmed Saturday. The University will now verify and validate petition submissions over the next two weeks.

While waiting for the official confirmation for the group’s petition, Harvard Forward scheduled strategy calls to discuss election and publicity strategies, according to a Thursday email sent to supporters.