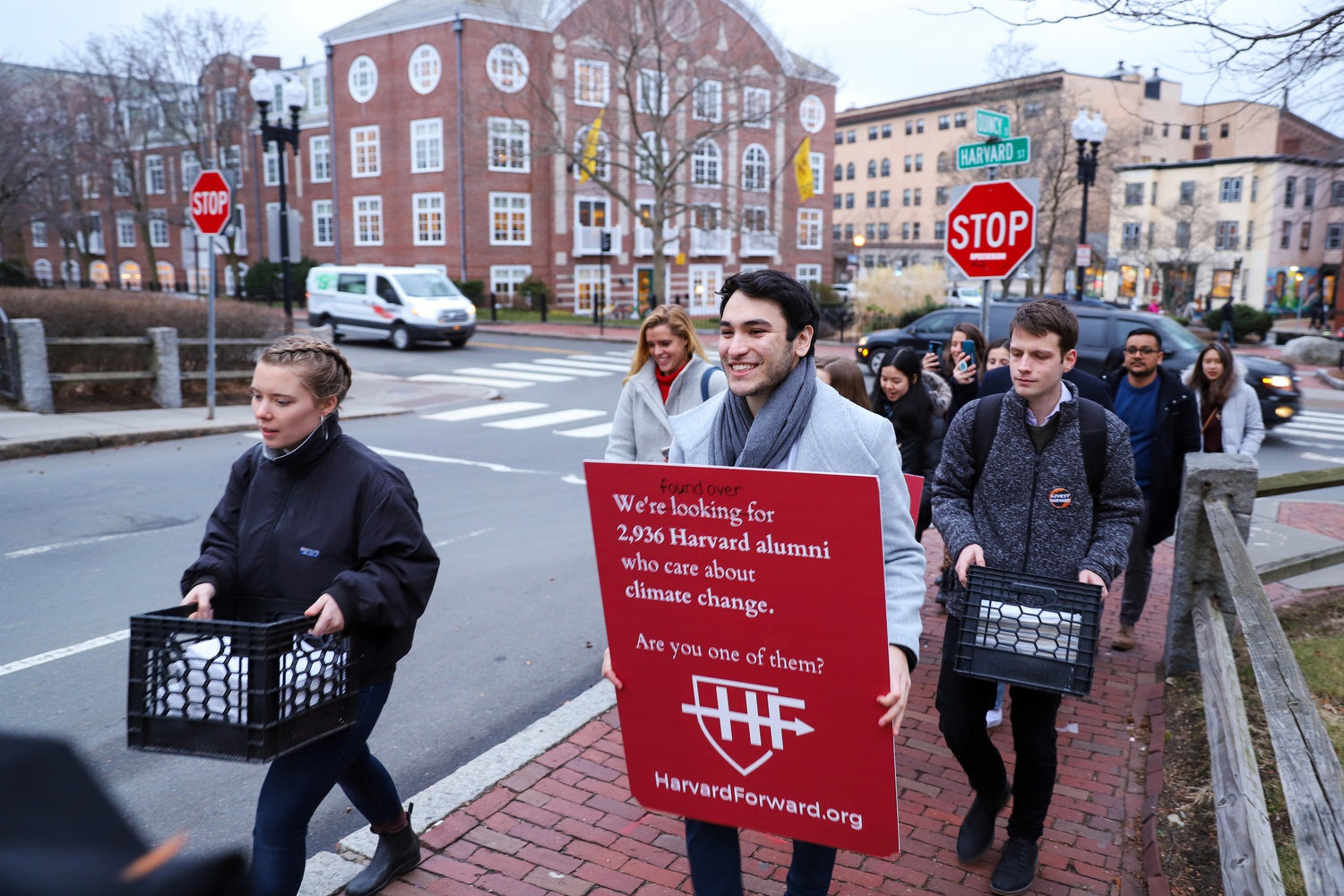 With more than 20,000 signatures in hand, supporters for Harvard Forward on Saturday hand-carried nomination forms for the annual Board of Overseers election to Loeb House, which houses Harvard’s governing boards and its administrative offices.

Harvard Forward — a student and alumni group working to bring attention to climate change and recent alumni representation within Harvard’s governance boards — endorsed five candidates to sit on the Board of Overseers — the University’s second highest governing body.

Each candidate received over 4,500 alumni signatures, according to a Harvard Forward press release. About 3,000 signatures from eligible voters are required to put a candidate on the ballot.

“The final signature count, pending verification from the Office of the Governing Boards, consists of nearly 1,400 online signers and more than 3,400 unique in-person signers,” the press release reads. “Given that each candidate must be nominated individually, the campaign ultimately collected over 20,000 separate signatures.”

Despite Harvard Forward endorsing its own candidates in October, Harvard did not nominate any of the group’s endorsed Overseer candidates to the ballot last month. However, a candidate could make it onto the ballot by submitting a petition with 2,936 alumni signatures — one percent of eligible voters in the prior year’s election — by Feb 1.

At Saturday's event, a group of roughly ten Harvard Forward organizers gathered in front of Cafe Pamplona in Harvard Square before walking to Loeb House to deliver the nomination forms. Supporters held previous campaign signs that read “We’re looking for 2,936 Harvard alumni who care about climate change.” They crossed out “are looking for” on the sign with markers and wrote “found more than.”

Danielle O. Strasburger ’18, Harvard Forward’s campaign manager, celebrated the group’s milestone with a bottle of champagne shortly after dropping off the forms.

The candidates thanked their supporters on social media after achieving the required number of signatures needed to be considered for the ballot. One of the candidates — Margaret “Midge” Purce ’17 — wrote on Twitter that she was proud over 4,500 people nominated her and the other four contenders onto the Overseers ballot.

“SO PROUD to say that over 4500 people signed to nominate myself and 4 other candidates to Harvard’s Board of Overseers!!!” Purce wrote on Twitter. “My dad’s gonna be so proud.”

University spokesperson Christopher M. Hennessy wrote in an email to The Crimson that Harvard is grateful for engaged alumni.

"Harvard has diverse and engaged alumni around the world, and we are grateful for their continued commitment and interest in the university,” he wrote.

The University has received the nomination forms, and it will now verify and validate petition submissions over the next two weeks, according to Hennessy.

—Staff writer Ruoqi Zhang can be reached at ruoqi.zhang@thecrimson.com. Follow him on Twitte @RuoqiZhang3.