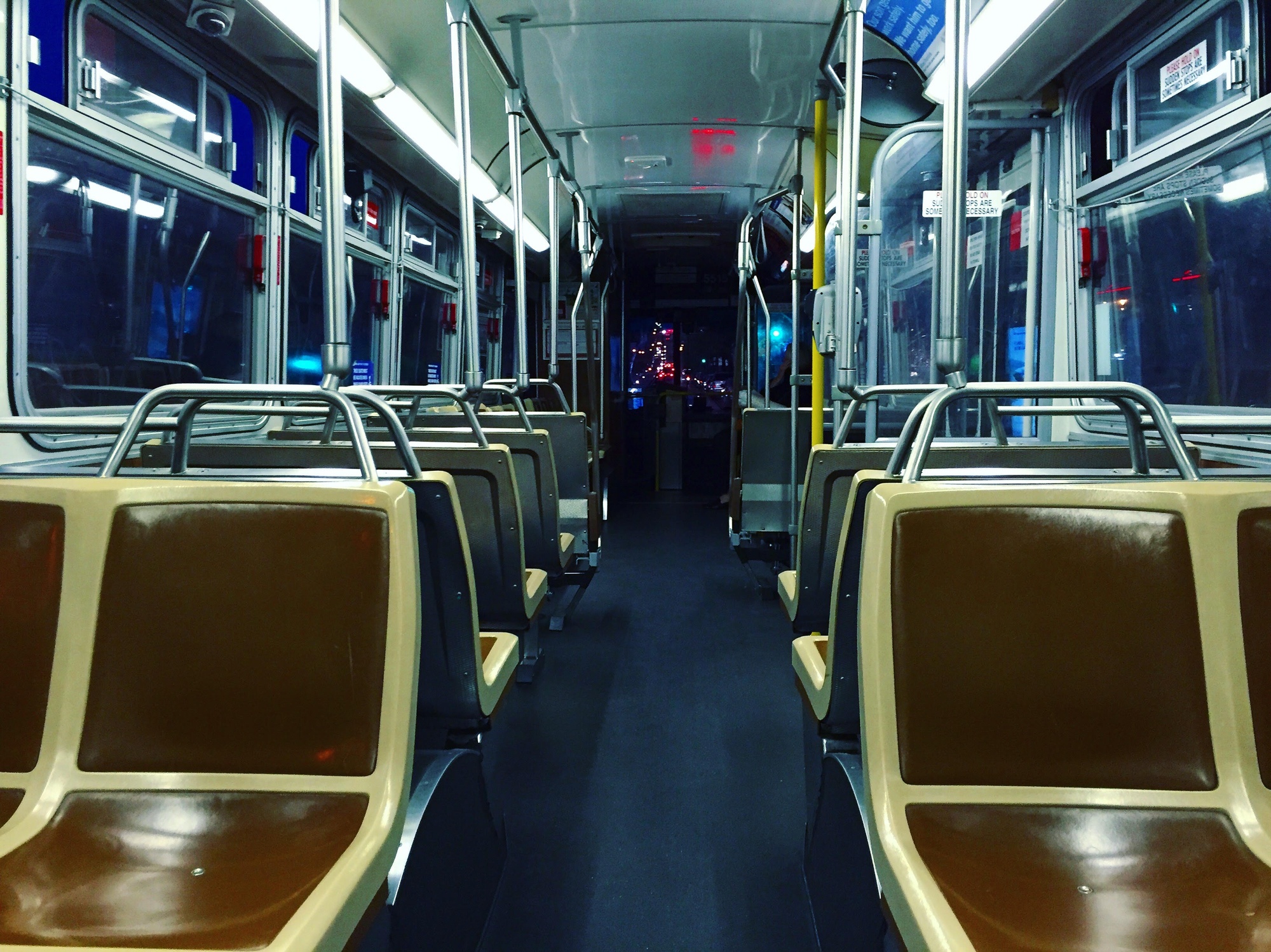 If you ride the bus every day, you might not notice how much the city is changing; but it’s apparent to me, each time I come back from college, that things are different.
Advertisement
Advertisement

From Hill to Hill

There are more houses with regal columns and streets with plenty of parking. The people are different too. It’s almost as if older people have gotten younger. Dispensaries and ramen places have turned into lingerie boutiques and salad shops.
By Lily J. Cunningham

Each time I return home from school, I take the 24 Divisadero to visit my high school friends.

The 24 bus slices all the way through San Francisco, from the north to the south and back again. I like to ride it because I can see the whole city; it’s whiter than I remember. Recently, it’s become harder to recognize the shops that I pass or the people that sit next to me.

I get on near my high school, at the top of the Pacific Heights District in the north. It’s just the bus driver and me. We descend down the hill, passing glowing mothers and smiling babies and nannies driving kids from private kindergarten to karate lessons. These people who live at the top, wealthy and immaculate, wouldn’t be caught dead on the 24.

If you ride the bus every day, you might not notice how much the city is changing; but it’s apparent to me, each time I come back from college, that things are different. There are more houses with regal columns and streets with plenty of parking. The people are different too. It’s almost as if older people have gotten younger. Dispensaries and ramen places have turned into lingerie boutiques and salad shops.

During the first ten minutes of my ride out of Pacific Heights, not a single passenger gets on. Then we stop at the intersection of Geary Boulevard, one of the longest streets in San Francisco. It also happens to lie at the bottom of the hill. The bus fills.

The new passengers, many coming from work, seem tired and frantic. The air is sweet with alcohol and sweat and stress. The bus driver yells at a homeless woman who is trying to board with her shopping cart of belongings. Someone is talking to themself. Another person lights a joint.

For ten blocks, no one gets on or off the bus. We’re going back up the hill again, and after we ascend about halfway, I realize that the bars and tattoo parlors I used to recognize are now rustic coffee shops with single-origin espresso and outdoor seating. Public schools are now private. I am the first one to get off. As I step down the stairs, I watch the bus climb towards the huge houses on top of the hill.

Talking about my city makes me uncomfortable.

Whenever I try, I think of the 24 Divisadero. I think about how many square feet of picturesque houses and Victorian mansions go by until a homeless person is barred from boarding the bus. If I think hard enough, I can see the homeless woman with her shopping cart disappear around a corner as the bus moves on to another swath of expensive lifestyles.

When I say I’m from San Francisco, people are mostly enthusiastic. They comment on the beautiful parks and the fog that I cherished as a child. The city is modern and happy and free. But it’s also expensive and divided. I get frustrated when I describe it. Do I tell them that I can’t see downtown from my house? Do I tell them that a salad is $15 or that a coffee is $5? Do I tell them that the outside walls of the Twitter building in the financial district are lined with homeless people?

The city is a contradiction. The illusion of innovation and good vibes is a veil that shrouds its drastic inequality.

And now, amid the COVID-19 pandemic, that veil has been violently pulled away.

Despite calling San Francisco home for 15 years, I didn’t realize how neglected these wealth disparities were — until a shelter-in-place was ordered to halt the spread of COVID-19. Now, the city has no choice but to address these disparities, brought into stark relief by the struggles of its homeless population. But it still feels like San Francisco is only owning up to them only out of necessity.

“From the beginning, [our homeless population] was an area of concern,” said Dr. Grant Colfax, the head of the city’s Department of Public Health, in an April 10 press conference. “From the beginning of our response, [they were] a prioritized population.”

When I read this, I can’t help but wonder what Colfax means by “prioritized population.” Has San Francisco finally decided to address its well-known “homelessness issue?” Or is it more concerned that homeless people might contribute to the spread of the disease?

In a frenzy to de-densify homeless shelters, the city discussed multiple options. Leasing hotel rooms and filling convention centers with new beds were both floated as suggestions, but little action has actually been taken.

On April 6, two homeless people tested positive for the coronavirus. Five days later, there were 70 new cases in the city’s largest homeless shelter.

To further de-densify, the city talked about moving the homeless into city parks and monuments like the Palace of Fine Arts in the Marina District.

It’s weird to think about the Marina District now; most of my friends from high school who lived in the neighborhood have since moved away. They’ve been replaced by wealthy tech guys fresh out of business school. The Marina has become known as the frattiest and whitest part of the city.

The Palace of Fine Arts is the pride of the Marina, a monumental parody of a roman bath. When the city suggested repurposing The Palace as a refuge for the homeless, residents of the Marina were enraged. “No one wants this shelter in their neighborhood,” one resident commented in an online forum.

Is this really the San Francisco I fell in love with growing up?

With all of the news surrounding COVID-19, I hardly realized that some residents were actively opposing the temporary housing of the homeless and fuming because the shelter might encroach on their Starbucks Reserve and beloved upscale deli market. Wasn’t everyone supposed to stay inside anyway?

The city eventually dissolved the option to use The Palace.

Now, the government is racing to lease hotel rooms to isolate individuals at risk. In a city-wide press conference, Trent Rhorer, the executive director of the San Francisco Human Services Agency, claimed that the Mayor’s Office reached out to hotel owners throughout the city in hopes of securing rooms for the homeless; more than 45 hotels agreed to provide upwards of 10,000 rooms.

But I wonder how many people have actually moved.

The construction of new buildings like the Salesforce Tower, thought of by many as a symbol of the rapid changes the city has undergone in recent years, has obscured the reality of the nearly 17 percent spike in homelessness between 2017 and 2019 alone. The city’s historic skyline changes, and we make empty comments expressing concern for its homeless population. It’s ironic that only now that we are instructed to stay inside are we actually witnessing the reality of the San Francisco homelessness epidemic.

I can’t help but think about the future: What will become of the 7,000 hotel rooms currently occupied by individuals who won’t be able to afford their rent once the virus is contained?

And when I look out of the back window of the 24 Divisadero six months from now, what will I see?

— Staff writer Lily J. Cunningham can be reached at lily.cunningham@thecrimson.com.