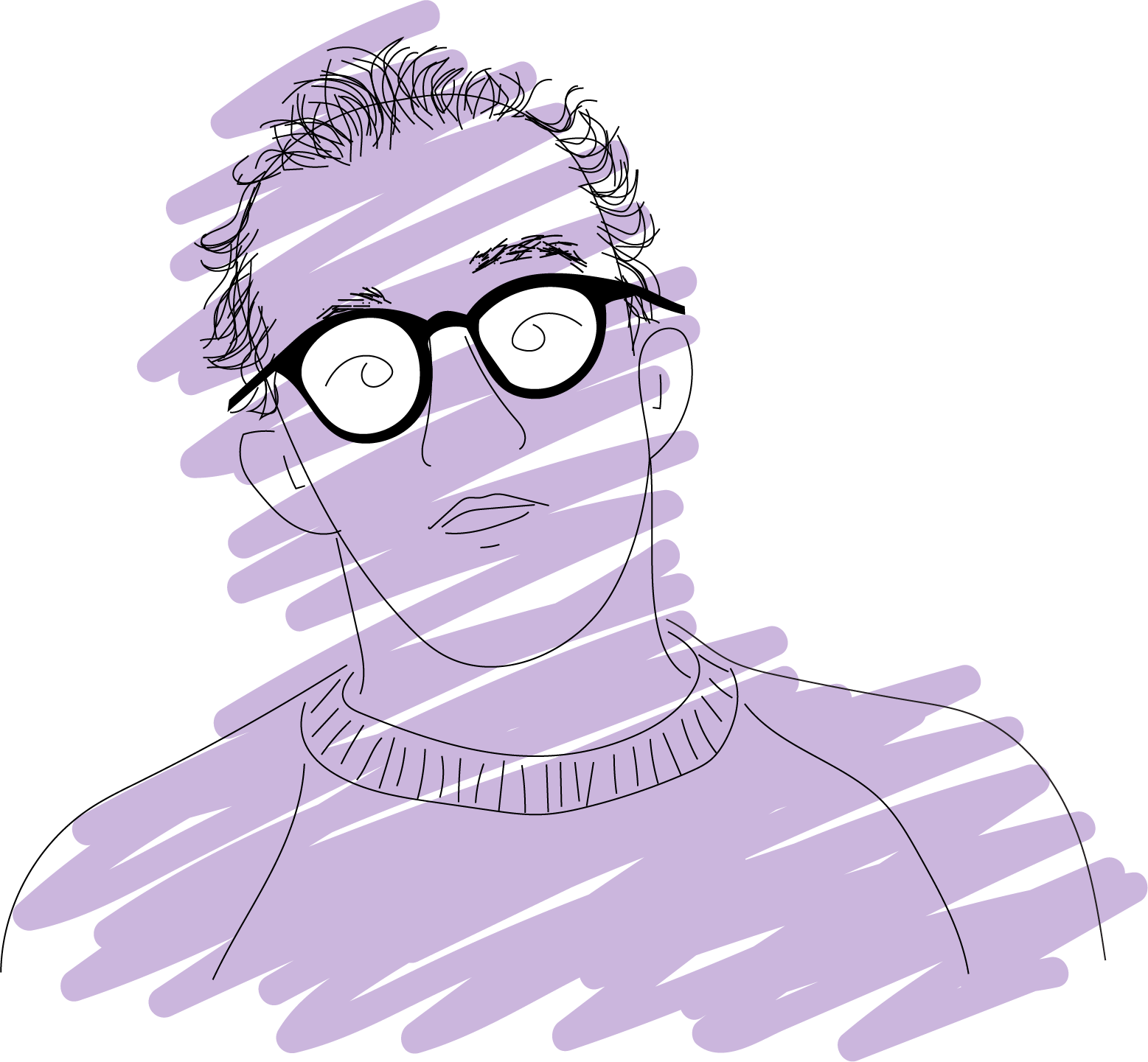 My baby Keith, even when you were purple, you acted like a baby. You left this world the same way you entered it: nonjudgmental, pure of mind, seeing the world with a simple, singular clarity.
By Paul G. Sullivan

My baby Keith, even when you were purple, you acted like a baby. You left this world the same way you entered it: nonjudgmental, pure of mind, seeing the world with a simple, singular clarity. At your funeral, your younger sister, Kay Haring said, “​My memories growing up with Keith are very much like remembering what he was like just yesterday.​” You were always playful with Kay, even when those plum spots came and drained away all your energy, even when you were days away from being just another purple baby buried in the ground.

My baby Keith, baby was your social philosophy. It was your art. You drew babies more than you drew anything else. You drew the Radiant Baby — a little yellow jelly bean crawling on its hands and knees, protected by a circle of radiating lines. “Babies represent the possibility of the future, the understanding of perfection, how perfect we all could be. There is nothing negative about a baby ever​,” you said in an interview when asked about all the drawings of all the babies. You wanted to share your philosophy — the philosophy of babies — with everyone. During your first few months in New York in 1978, you rode the subway, handing out buttons emblazoned with your Radiant Baby to passengers. You gave those yellow buttons to anyone and everyone, because babies are nonjudgmental, “​a clean plate of pure love​.” People never refused the yellow button with the Radiant Baby because it was so simple, so innocent.

My baby Keith, you wanted to be part of something for as long as you could remember. So, when you were fourteen, you joined the Jesus Saves movement.​ ​All the art you made at that time was Jesus, Jesus, Jesus. You committed all your time to it. But just for a year. And then you got bored. So, you started doing drugs because drugs were another way of belonging. You’d smoke pot and drink with kids you had just met before going to school. You loved Angel Dust. Often, your old friends would find you stumbling around town, speaking nonsense to yourself.

But my baby Keith, all of these things were fleeting. What you really became a part of in New York, what you became deeply imbricated with, what you became irremovably fixed to, was cold hard cash. Capitalism, my baby. You did advertisements for Swatch and Absolut Vodka — Radiant Babies checking the time, Radiant Babies crawling around a handle of Sweden’s finest, Radiant Babies inside a pack of Lucky Strikes. Maybe this was always where the Radiant Baby was headed. You did, after all, get the idea for those yellow buttons after coming to New York and seeing how people kept their museum stickers on for hours after leaving the Met or MoMA. Those stickers functioned like little status symbols, and the Radiant Baby did too. The Radiant Baby wasn’t just meant to be your social philosophy. It was also meant to be your logo.

My baby Keith, in 1986, you opened your Pop Shop at 292 Lafayette St. What was once art by Keith Haring became “K. Haring” merchandise. Your art was meaningless in its ubiquity. You were emblazoned on T-shirts everywhere. You summed up New York cool. You were a skateboard and you were a child’s chair and you were a refrigerator magnet. This is what you wanted for your art: for the Radiant Baby to spread its innocent energy everywhere. You wanted your art, in all its baby-ness, to serve a variety of agendas, and commodifying it was a way to get that job done.

My baby Keith, in serving all of these agendas, your life — with all its pain and all its panic and all its purple — got lost. We find you today not in your Pop Shop, but on a rack in Urban Outfitters. We find you ironed on Egyptian Cotton, a somehow kitschier version of the kitsch from your Pop Shop. We buy you and absorb you, but we absorb the you that was assets, not the you that was flesh. Clad in cotton, we feel cool in our nostalgia for 1989 and don’t think about the purple that took you and the people who stood by as that purple took you. We don’t think about what 1989 might have looked like had we been there — how we ourselves might have been in pain, might have been panicked, might have wound up another purple baby in the ground.

My baby Keith, one night you were in bed reading “​Cities on a Hill.”​ In the book, there’s a man who inspects himself every day in the mirror, looking for purple. You got out of bed, walked towards the mirror, and looked for purple. There it was, on your leg. The next day, you went to the doctor, and you got the diagnosis. You walked to the East River. You cried and you cried and you cried.

My baby Keith, you began taking the drug. One week, your tooth started hurting so you went to the dentist. He saw the purple plum spot on the roof of your mouth. He asked you what it was, and you told him. He was wearing a mask and gloves, but he stopped examining you anyway. You had a cavity but were forced to leave the dental office. A few months later, the cavity got so bad you opened a phone book and called every dentist in New York, trying to find one who would touch you and your purple. By the time you did, you had to get a root canal. To manage your purple, you watched your diet and you slept nine hours every day. You tried to avoid stress — if that’s something one can avoid when life is purple.

My baby Keith, in 1989, you saw the Aids Coalition to Unleash Power’s 1987 “​Silence = Death”​ poster and created a painting by the same name. ACT UP’s poster was black with a tiny pink triangle in the center: an inverted concentration camp badge. ACT UP’s poster is panicked. There’s a choked silence in the words, “Silence = Death,” at the bottom of the poster, the sea of black closing in on the unassuming sliver of pink. You took this image and superimposed your signature jellybean-like figures. The panic of purple found in the poster — that choked silence — was lost in your rendition, Keith. The tension which was so tightly packed into the condensed font of the poster is nowhere to be found in the fluidity of your figures. The 1987 poster incites anger; your riff pacifies it.

My baby Keith, you weren’t trying to pacify purple — you were trying to purify it. That’s what babies do. Your art about purple tried to get the message across the way you had always gotten the message across: with purity, without judgment, with a simple and singular clarity, with a hope that humans can be made perfect, with a love that is blind. You drew jellybean babies dancing, even while purple babies were dying. You drew fluid lines with radiant energy, even while, out in the world, purple seemed to be a big fat eraser rubbing out all that energy.

My baby Keith, I wish it had. I wish you had made art about purple that was purple and not yellow. I wish you had tried to explain purple by being honest and not by trying to purify purple or make purple palatable. Your art drained purple of all its pain and panic so that viewers could ingest it like static on a television screen. They didn’t have to feel guilty that bodies were being shoved into trash bags. They didn’t have to think about dentists who refused to touch you, about walks along the East River, about the time you cried and you cried and you cried. What did it feel like to be left for dead, Keith? Your artwork leaves me no answer.

My baby Keith, maybe you would have grown up one day, maybe you wouldn’t always have been hanging onto life by the teat. Maybe you would have realized that love can’t be indiscriminate, nonjudgmental, blind — that purple babies need more love than people whose life is only connected to purple by a poster they see on the subway ride to work. But you didn’t get the chance to realize any of this because purple kills, because it infantilizes. It makes you helpless, makes you wail, makes you whither away so much that, even though you’re six feet tall, you weigh no more than a baby.

My baby Keith, in December of 1989, you walked into your studio and immediately had to lie down. You were trying all different kinds of pills in 1989, Keith. Some helped and others didn’t. When you tried to talk, all that came out was a scratching and screeching. Your mom came to stay with you in your apartment, but you didn’t know who she was. My baby Keith, you died at 4:40 a.m. on Friday, Feb. 16, 1990. A few days later, your big eyes, loose little curls, and the purple of your once smooth skin were charred and strewn across a field. In the summertime, it’s a cornfield. In February, it’s completely bare except for some hay.

— Magazine writer Paul G. Sullivan can be reached at paul.sullivan@thecrimson.com. Follow him on twitter @neuroticgayboy. This is the third installment of his column, You Don’t Always Have to Be on Top, which explores gay male culture on and off campus.