Bagged Meals, Nose Swabs, and Quarantines: How Students Are Moving Into Harvard’s Dorms During the Pandemic 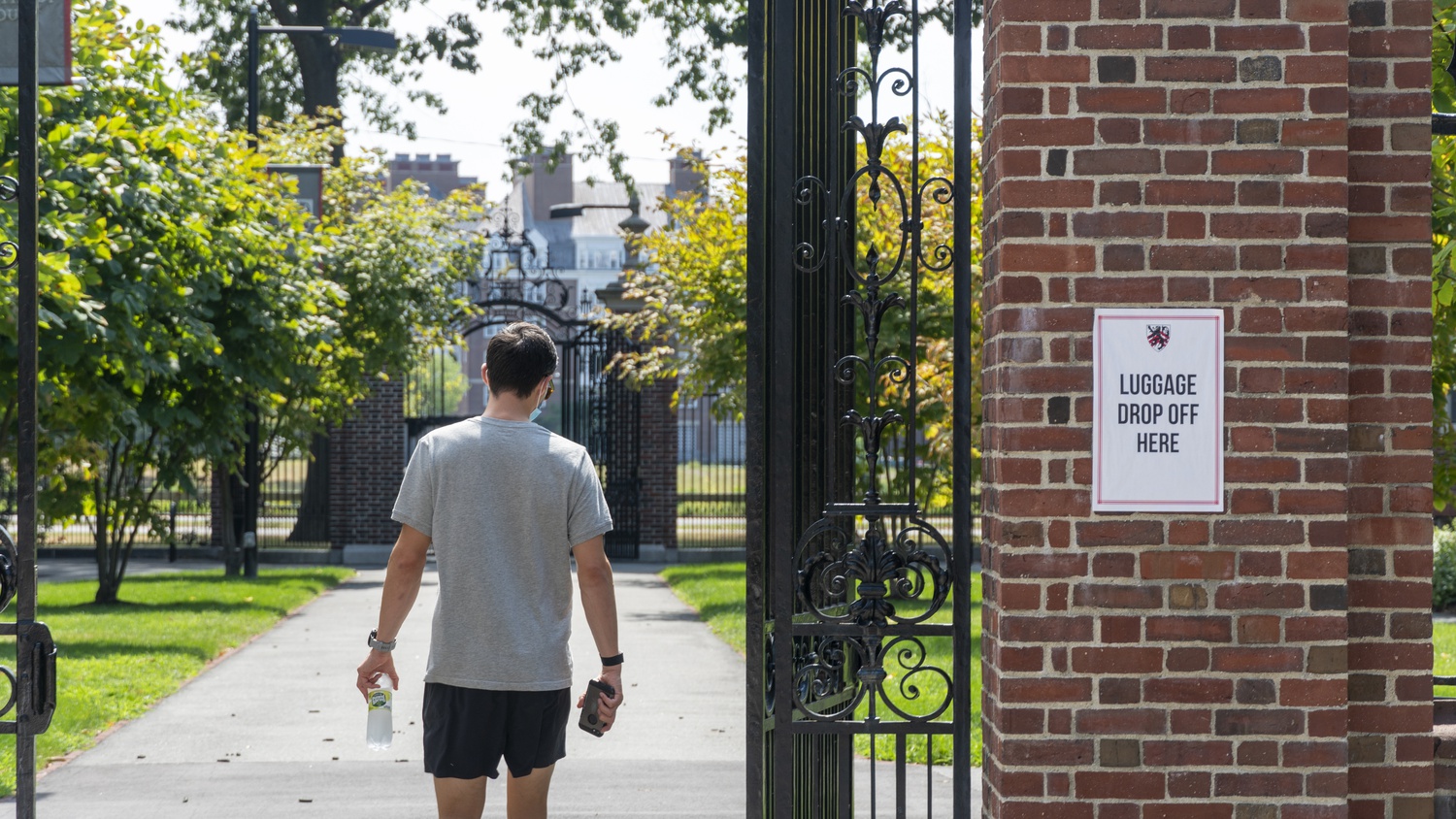 Just a quarter of Harvard undergraduates are living in residence halls this semester. Under normal circumstances, more than 97 percent of students live in campus dorms. By Zadoc I. N. Gee
By Juliet E. Isselbacher and Amanda Y. Su, Crimson Staff Writers

The last days of August normally see Harvard Yard filled with late summer tourists, chaotic crowds of freshmen, and exuberant upperclassmen excited to reunite with friends. This year, campus has become quiet as a handful of masked students enter the dorms to begin a near-unrecognizable semester in residence.

In July, the College announced all undergraduate classes would be taught virtually and invited freshmen — in addition to upperclassmen with extenuating circumstances — to spend the fall semester on campus. Though Harvard initially estimated that up to 40 percent of all undergraduates would be welcomed back, as of early August, administrators projected that only 25 percent of students would return to Harvard’s dorms.

Students invited to live in residence began trickling into campus this Sunday, arriving at pre-assigned times staggered throughout the week. Before settling into their assigned dorm rooms and beginning their mandated period of quarantine, undergraduates had to complete a highly regimented series of tasks within two hours: undergoing testing, picking up their keys and a day’s worth of pre-packaged meals, and moving into their dorms.

Undergraduates had to begin their time on campus with a visit to a large tent in the Science Center Plaza during their assigned move-in window. There, they began what will soon become a thrice-weekly ritual for students in residence: testing for COVID-19.

Prior to their arrival, students must create an account with Color, a University-sanctioned testing company. After students activate their testing kit at the tent, medical professionals on site walk students through the testing process: using a swab to twist inside both their nostrils several times and placing the swab in a capsule.

“We had to use hand sanitizer before and after we opened the bag to get the vial. They were six feet apart behind the table,” he said. “There was a bin where you would peel something off or take something out of the bag and then leave it in that bin and then they would clean it in between each person.” 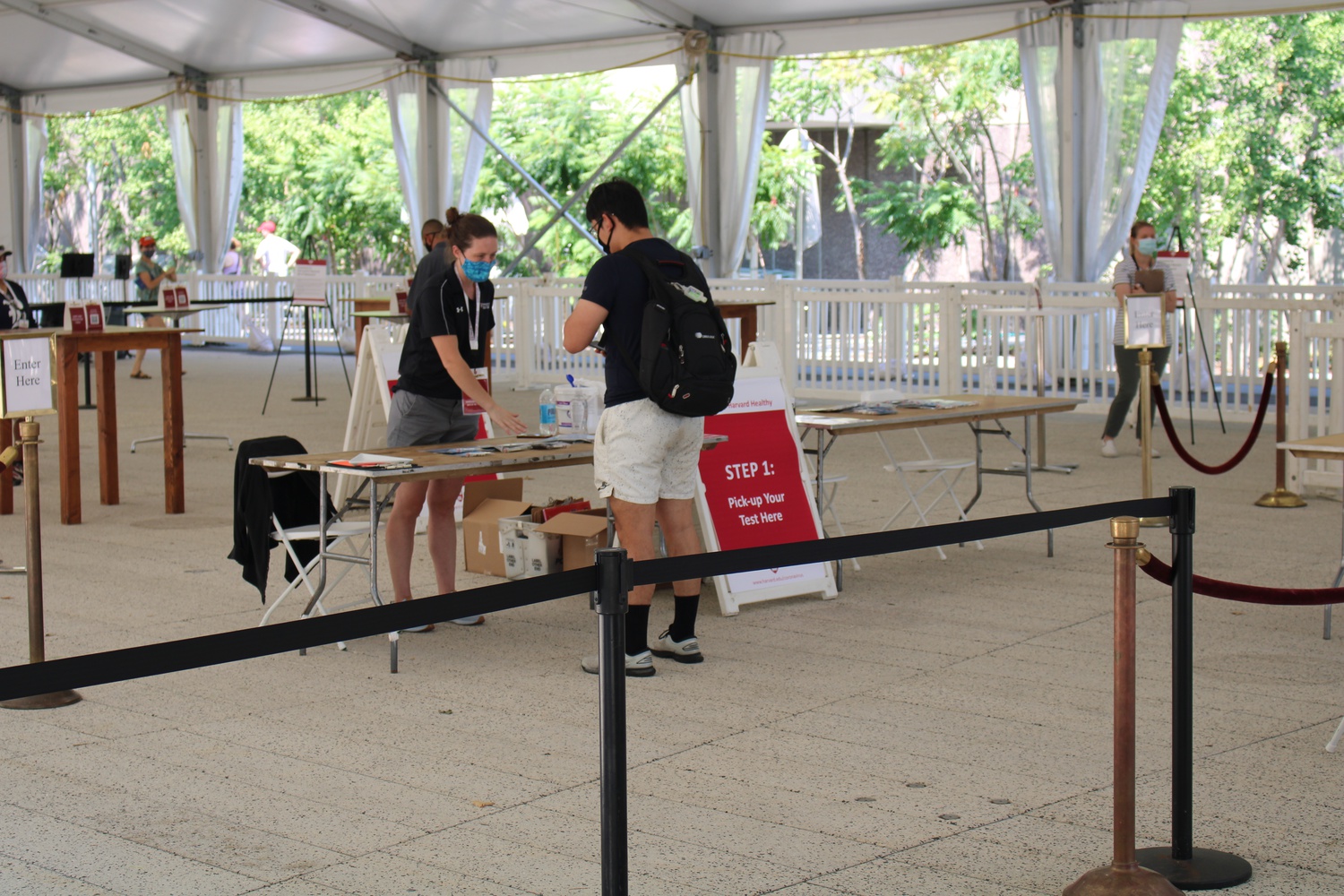 A student picks up a COVID-19 test in the Science Center tent. By Aidan F. Ryan

After completing their tests, several recently moved-in students said they received a wristband indicating they had been tested. They could then pick up bagged meals for their first 24 hours on campus, including lunch, dinner, breakfast, and snacks.

“It was super organized and quick,” Prashanth “PK” Kumar ’21 said. “There was music playing, and [Dean of Students] Katie O’Dair and [Faculty of Arts and Sciences Dean] Claudine Gay were there. I felt it was a very nice way to welcome the people who are coming back to campus.”

Albert W. Zhang ’24, an incoming freshman, said Dean of the College Rakesh Khurana and University President Lawrence S. Bacow were also present at the testing station when he went through on Monday.

Until students receive a negative result on their initial test, they may only leave their suite to use the restroom or in the event of an emergency.

After receiving a negative result, usually within 24 hours of their test, students enter phase two of their mandated quarantine. They can then begin picking up to-go meals from their dining halls and visit outside areas adjacent to their dorm for up to 30 minutes at a time. To complete this phase, students must undergo testing using kits placed in their rooms two additional times, on their fourth and seventh days on campus.

If those two tests come back negative, students are then free to move about campus while adhering to College health and safety guidance. A student who receives a positive test result, by contrast, will receive instructions from Harvard University Health Services about how to self-isolate.

“We have to wear masks. We can't congregate obviously. We can't invite people into our dorms, or else we'll get a red card, which basically means you'll get in trouble,” C. Angela Dela Cruz ’24 said. “The consequences haven't been determined yet and, honestly, nobody wants to find out.”

Raphaëlle Soffe ’21, who spent the last few months on campus, said the process of moving out of her summer housing, which will now serve as an isolation unit, was arduous.

With only a short hour window to make six or seven trips between the buildings, she said the process was “very stressful.”

“The elevators were cramped,” she said. “If their point was to avoid having people clustered together, the opposite happened because everyone was in the elevator at that particular point.”

Despite these challenges, Soffe said she noticed logistical improvements in the College’s testing machinery since the summer. While waiting for testing could previously take as long as 90 minutes, Soffe said it took her just 10 minutes to get re-tested and join her new housing “bubble.”

“I think they figured out that there’s just too high a demand,” she said.

Still, he added that moving in did bring some logistical challenges. A bevy of upperclassmen normally guide freshmen to their rooms, but a lost Zhang said he eventually resorted to Googling the building’s online work plan to navigate.

His older brother Bill W. Zhang ’21, who is also spending the semester on campus, said when there were unforeseen hitches in administrators’ careful plans, students stepped up to maintain a safe dynamic.

The first night after move-in, for example, the elder Zhang said the fire alarm in his building went off at 5 a.m. Half asleep, he donned a mask and joined the building’s 12 other residents to wait outside.

“Every single person was wearing a mask. And that really solidified for me that Harvard kids are taking this seriously,” he said. “[The administration] trusted us, the kids who came back, and I don't think we're gonna let them down.”