Philanthropist Richard A. Smith, Who Was ‘Deeply Devoted to Harvard,’ Dies at 95

Seeking to ‘Change the Direction of the Country,’ Harvard Students Take Time Off to Work in Politics 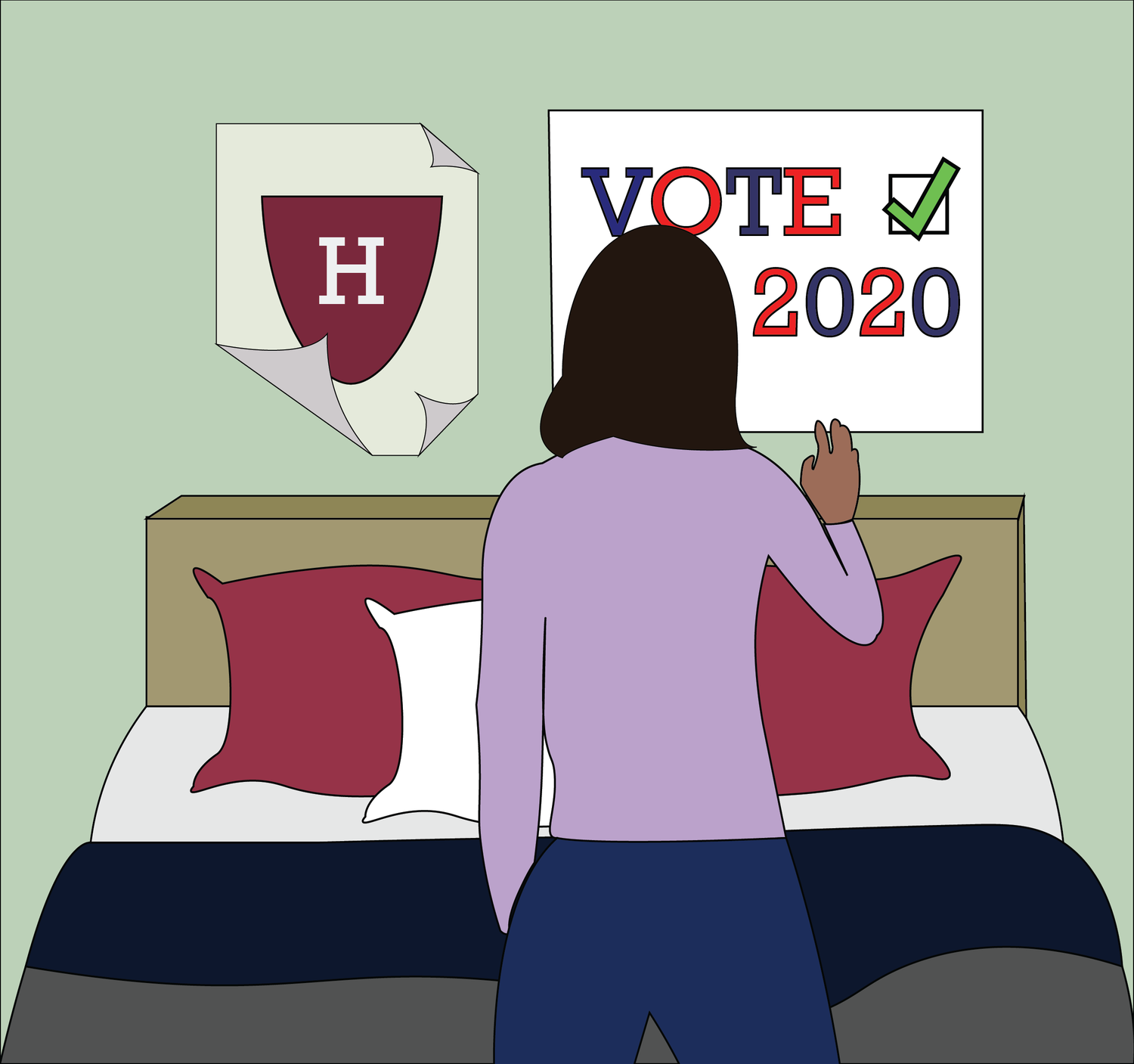 Bucking a trend among Democratic presidential tickets spanning decades, neither Joseph R. Biden nor Kamala Harris have an Ivy League degree. The same does not appear to hold true for this cycle’s political staffers, though, as many Harvard students take time off to work on political campaigns across the country.

After Harvard announced it would welcome most freshmen — along with select upperclassmen — back to campus and conduct its courses entirely online in the fall, many undergraduates expressed interest in taking a gap year or semester.

The 20 percent of undergraduates who eventually took the plunge had to confront how to spend their fall, unencumbered by coursework and other academic commitments. Some students interested in government or social justice ultimately decided to devote themselves to campaign work, voter mobilization, and other politically-oriented endeavors.

Currently based in Lorain County, Ohio, William M. Imbrie-Moore ’21 is spending the fall semester managing the campaign of Zach Stepp, a 24-year-old candidate running for the Ohio State House.

“It's a really, really close district, and he’s running a really competitive campaign so it’s an exciting time on the ground,” he said.

“The virus has made it challenging not being able to knock on doors like we want to, but it's definitely been a great experience to apply a lot of the experiences I've had on campus at Harvard to this campaign and lead a big voter contact and political operation,” Imbrie-Moore said.

While some students are working at the state level, others are engaged in local elections.

Patrick Barham Quesada ’21 deferred what would have been his final year at the College to support Democrat Daniella Levine Cava in the race for Miami-Dade county’s mayorship.

“It's the second most powerful position in Florida, and it's a really important race for Democrats, at least, because it’s a chance for us to flip it,” he said, explaining that Republicans have held the post for 20 years.

Barham Quesada, who concentrates in Government with a secondary in Sociology, said he manages social media, communications, and press releases for Levine Cava’s campaign.

“Basically everything that's forward facing — everything that comes out of the campaign — originates in my office, on my team, and it's been really cool,” he said. “I think there's certainly a value to having that grassroots experience — of campaigning and all that. So often people go straight from Harvard or Ivy League institutions right to strategy or right to high level positions and they miss out on knowing how it worked on the ground.”

Though working on a campaign is “a unique opportunity,” Barham Quesada, a Crimson Editorial editor, said it is as much, if not more, work than school. He estimated working up to 80 hours per week this semester.

Ben Gallagher ’23 is working as a fellow with the Michigan Democratic Party to help elect Democrats “up and down the ballot” in the Great Lakes State. He said he spends his time phone banking and field organizing.

“With the election being so high stakes, in my mind at least, having the opportunity or possibility — or maybe just it being more normalized — to take time off allows me to work on something that I see as important,” he said.

In addition to fulfilling a moral imperative, Gallagher said this experience will give him the “foundational” skills he needs to pursue his interest in potentially entering the public sector.

Beyond working on campaigns, some students are engaging in political research and consulting more broadly.

During his semester away from campus, Andrew S. Charroux ’23 said he is working full-time for Way to Win, a “homebase” for progressive donors and organizers looking to strategically approach political funding and advance “transformative” policy.

Though Charroux committed to taking a leave of absence before he had officially locked in his political internship, he said he saw the decision as a “leap of faith.”

“My decision to take time off was rooted in optimism about my potential to make a political difference,” he said.

“I knew I wanted to do something to help progressive Democratic leaders with the kind of research needs that I could offer,” he added. “I did a lot of digging online for job postings to see where I could be best used in this political fight for a more progressive future.”

Charroux said he plans to assist on-the-ground organizers and community leaders with political research and strategy to build a more “united and well-funded” progressive movement in the Democratic party.

“It's all about looking at the future of what the Democratic party could be if you invest in underrepresented candidates and community leaders who can have the grassroots organizing base for progressive leaders to really rise out of these communities,” Charroux said.

Charroux said he is also working part-time with the political and corporate research firm Jones Mandel, where he will work on vetting candidates as well as conducting and compiling “comprehensive” and “digestible” research for various clients.

Diverging from some of her peers, Sofia Andrade ’23 is making her foray into politics as a journalist, rather than as an organizer or a campaign worker. During her leave this fall, she is working at the outlet Who What Why to cover the 2020 election in Florida, with a focus on electoral policies and voter suppression.

“It's definitely been great to learn more about the political process from a journalist’s perspective. I really have to go very deep into everything I write about,” said Andrade, a Crimson Arts editor. “I become like an expert on each little thing.”

“Moving forward career-wise, I do want to go into journalism or some sort of political job,” Andrade added. “This job has just been really great in dipping my toe in the water in both of those sectors.”

Though Charroux said he has not decided whether he will return to campus after the fall, he said he is certain he will continue working in politics after the November election.

“With politics, when you're looking to really change the direction of the country and have long lasting policy wins, you can't just focus on the election,” Charroux said. “There's more than just the election cycle and after November, there's still gonna be more work that needs to be done.”