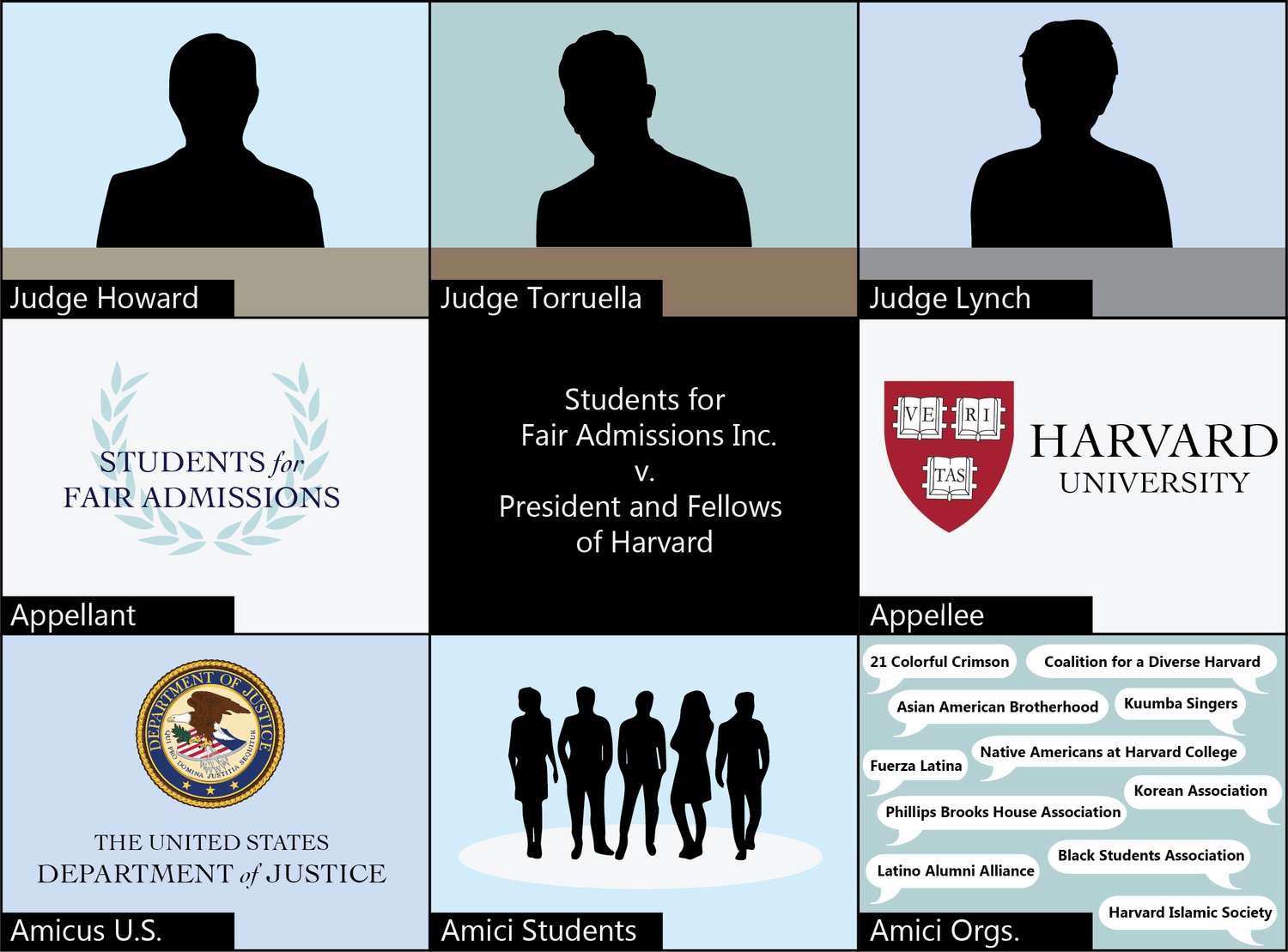 The United States First Circuit Court of Appeals heard opening oral arguments Wednesday afternoon from Harvard and anti-affirmative action group Students for Fair Admissions in the group’s appeal against the District Court’s November ruling that the College does not intentionally discriminate against Asian American applicants in its admissions process.

In the 80-minute-long hearing, SFFA challenged the extent to which Harvard used race as a means of admitting students while a Harvard representative defended the District Court’s previous ruling.

Assistant Attorney General Eric S. Dreiband of the United States Department of Justice, which filed amicus briefs in support of SFFA in February, continued by highlighting the harm racial balancing in admissions and the “suspicious nature” of the personal rating — a score that is consistently lower for Asian American applicants.

The Department of Justice is leading its own investigation against Harvard’s admissions process, which was ongoing as of December 2019. In a separate investigation, the Justice Department found last month that Yale University also discriminates against Asian American applicants.

Waxman rebutted Consovoy’s claims that Harvard altered its admissions percentage and policies by providing a wider pool of statistics.

“The plaintiff claimed that the evidence here is that there was some dramatic increase in 2019, which was the class that was admitted just after this lawsuit was filed,” Waxman said. “With all due respect, that is like the rooster taking credit for the dawn.”

David Hinojosa of the Lawyers’ Committee for Civil Rights argued the University rejects academically-strong African American and Latinx students every year and provided anecdotal evidence to back Harvard’s claim that it evaluates the entire applicant irrespective to any specific criteria, including race.

“Race-conscious admissions programs like Harvard’s remain a viable tool in pursuing some of the educational benefits that flow from a diverse study body, and they also help ensure remarkable, well-rounded underrepresented students of color are not overlooked in the admissions process,” Hinojosa said.

“Every one of the organizations that I represent condemns race discrimination against any person,” Lee said. “But this case does not seek to eliminate bias against Asian Americans, as demonstrated by the sole remedy that SFFA gives, which is the complete elimination of race conscious admissions and nothing more.”

Consovoy closed the first day of oral arguments by asserting that Asian American applicants receiving lower personal ratings can only have one explanation.

“Either Asian Americans have worse personalities and deserve lower personal scores, or something is awry,” Consovoy said. “It is one or the other.”

In an emailed statement immediately following the conclusion of oral arguments, SFFA President Edward Blum said SFFA was ready to challenge the District Court’s ruling to the end.

“It is our hope that this court will carefully examine the massive amount of irrefutable evidence we presented at trial that proved Harvard’s systematic discrimination against Asian-Americans and reverse the lower court’s ruling,” Blum said. “If necessary, Students for Fair Admissions is prepared to take this case to the U.S. Supreme Court.”