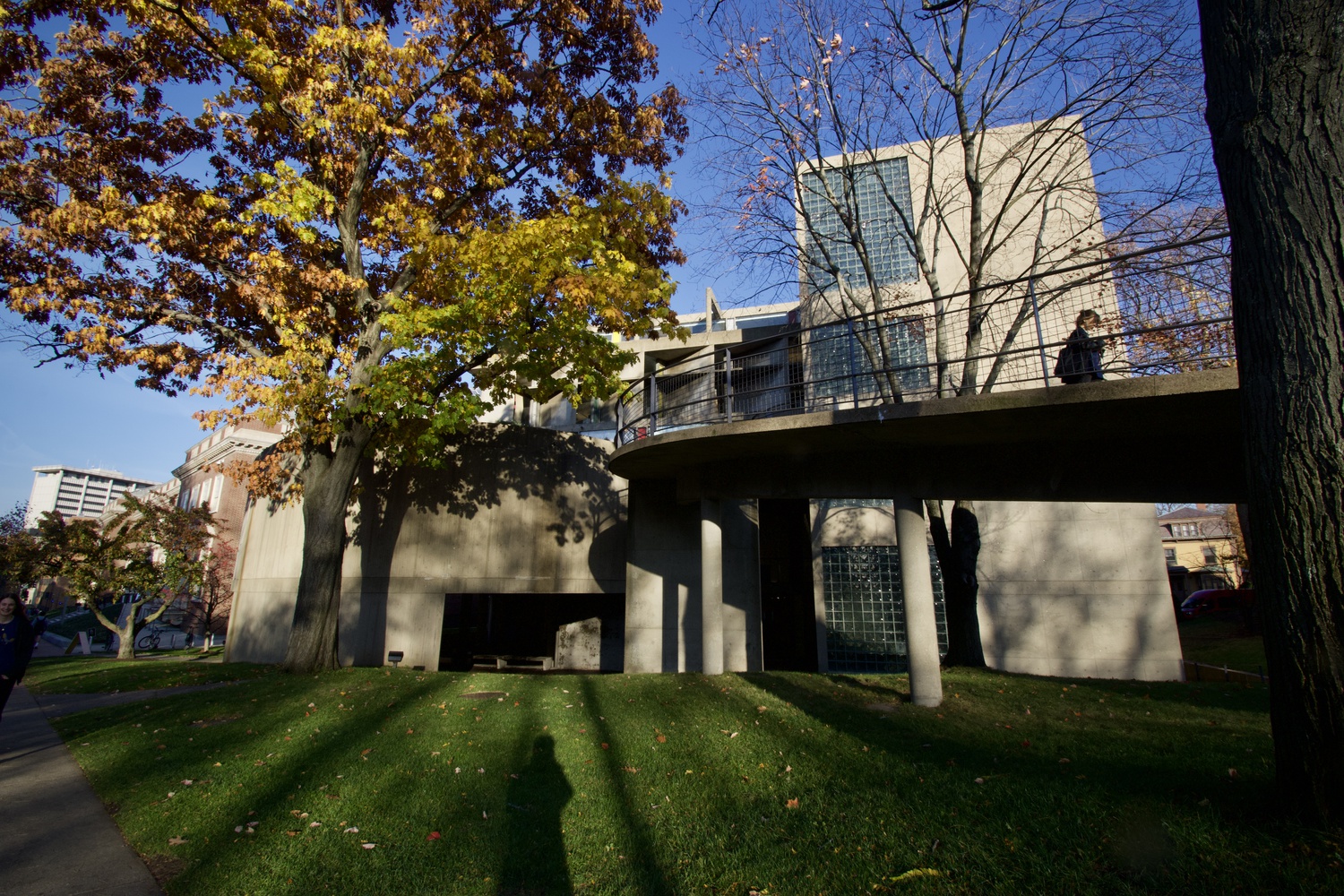 The Carpenter Center for the Visual Arts is the home to the Art, Film, and Visual Studies department at Harvard University. By Ben Y. Cammarata
Advertisement
Advertisement

For architecture buffs, the Carpenter Center itself is a wonder to behold, but behind its stark walls Harvard student artists spend hour upon hour creating masterpieces in their own rights.
By Roey L. Leonardi

With its striking modern design rendered in glass and concrete, the Carpenter Center for the Visual Arts stands in sharp contrast to the many traditional, red brick buildings typically associated with Harvard’s campus. Completed in 1963, the Carpenter Center is the only structure in North America designed by legendary Swiss-French architect Le Corbusier. For architecture buffs, the building alone is a wonder to behold, but behind its stark walls Harvard student artists spend hour upon hour creating masterpieces in their own rights.

“It’s kind of like you’re working in a museum,” says Meghan E. Grady ’23, an Art, Film, and Visual Studies concentrator who is currently taking two classes in the Carpenter Center. Grady switched into AFVS from Integrated Biology during her sophomore spring. Because of the pandemic, this semester is the first time she’s stepped foot in the Carpenter Center; previously, the only Harvard art class she had taken was online, with her bedroom serving as a makeshift studio.

“At home, it was like, I have to pack this all up so I have space to take my chemistry test,” she jokes. Now, she relishes in the ability to leave her projects half-finished and return to find them untouched, waiting for her to pick back up where she left off. Indeed, the Carpenter Center’s studios are strewn with students’ works in progress: clay sculptures rest under tarps, sketches hang taped to the windows, half-mixed paints harden on palettes.

Grady also feels that making art in a shared studio offers more opportunities for collaboration. Working alongside other artists, “there’s a lot of opinions,” she says, contributing to a sense of camaraderie. She says just looking around at the work of her peers is inspiring: Many students hang their finished projects on the building’s blank white walls, giving it the appearance of an impromptu gallery. Near her workbench, Grady has pinned up her most recent piece, a series of vibrant silkscreen-printed images of crushed soda cans which she says are both “an exploration of color” and “a commentary on consumerism.”

Another factor which contributes to Grady’s sense of kinship with her classmates is the sheer amount of time they spend in the Carpenter Center each week — Grady clocks in six hours between her two classes alone, not to mention time spent working outside of class. For Obielumani N. Amudo ’23, an AFVS concentrator who is taking all four of her classes in the Carpenter Center this semester, this figure is tripled to a whopping 18 hours of class time weekly. 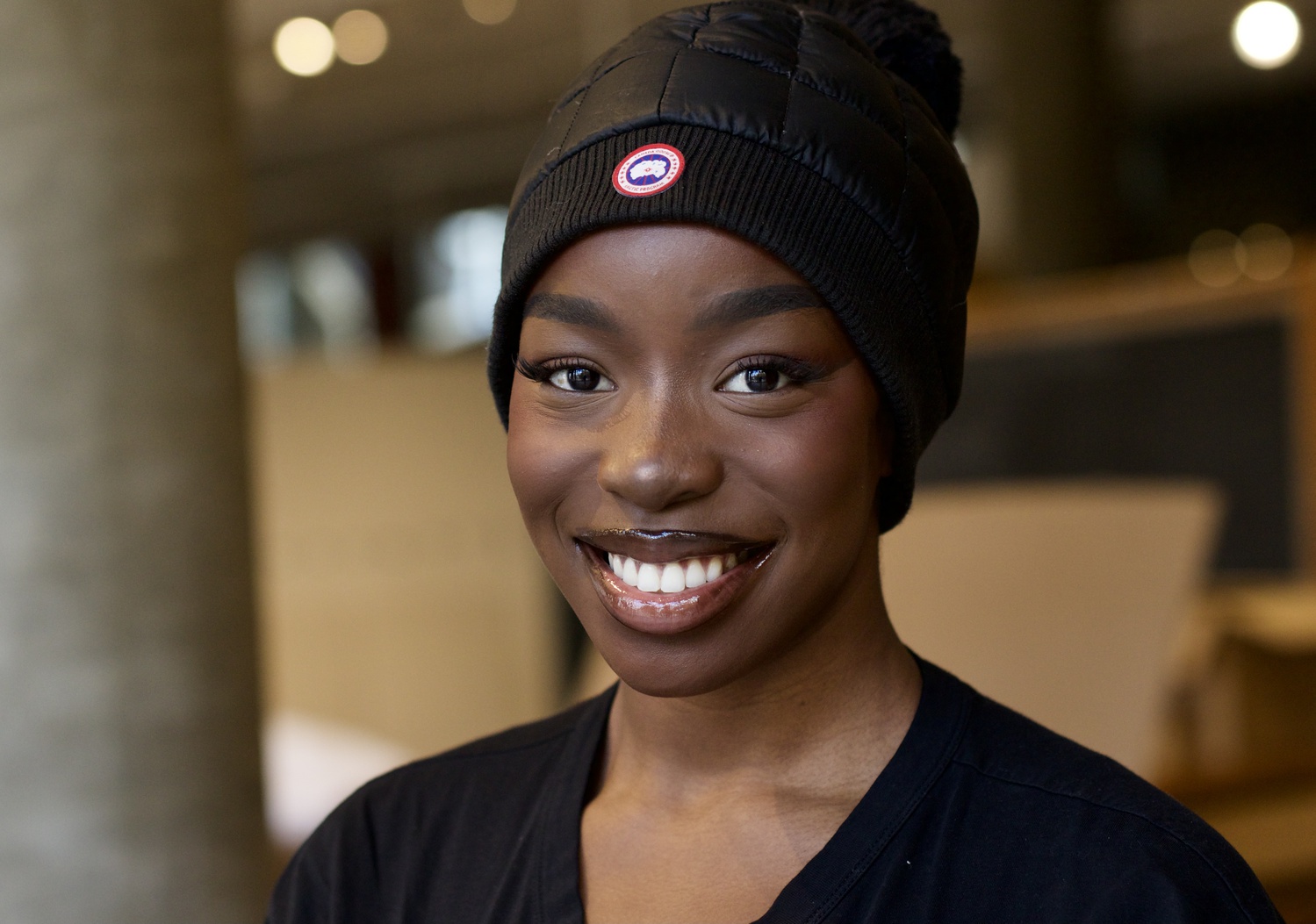 Obielumani N. Amudo ’23 is an AFVS concentrator who frequently works in the Carpenter Center. By Ben Y. Cammarata

Like Grady, Amudo switched into AFVS from a STEM concentration — Statistics. She says since high school she’s assumed she should study a subject typically deemed rigorous. However, over her gap year during the pandemic, she realized that because she is already on the well-structured path toward working in finance, her concentration decision won’t have a huge impact on her post-graduation career. She asked herself, “If I could study anything, then what would I study?” And despite the pressure to opt for a more traditional major, she says she could not get art off her mind.

For Amudo, on a campus where the vast majority of students do take more traditional academic paths, the Carpenter Center offers a “secure place where art is taken very seriously,” and she feels “very supported by being in [the] building.”

She loves its huge windows and the natural light they provide, reminiscing on an early morning spent painting her final project for her first art class at Harvard — a series of black-and-white oil paintings depicting close up shots of her mother’s face — when she watched the sun rise over her canvases from the building’s third floor. 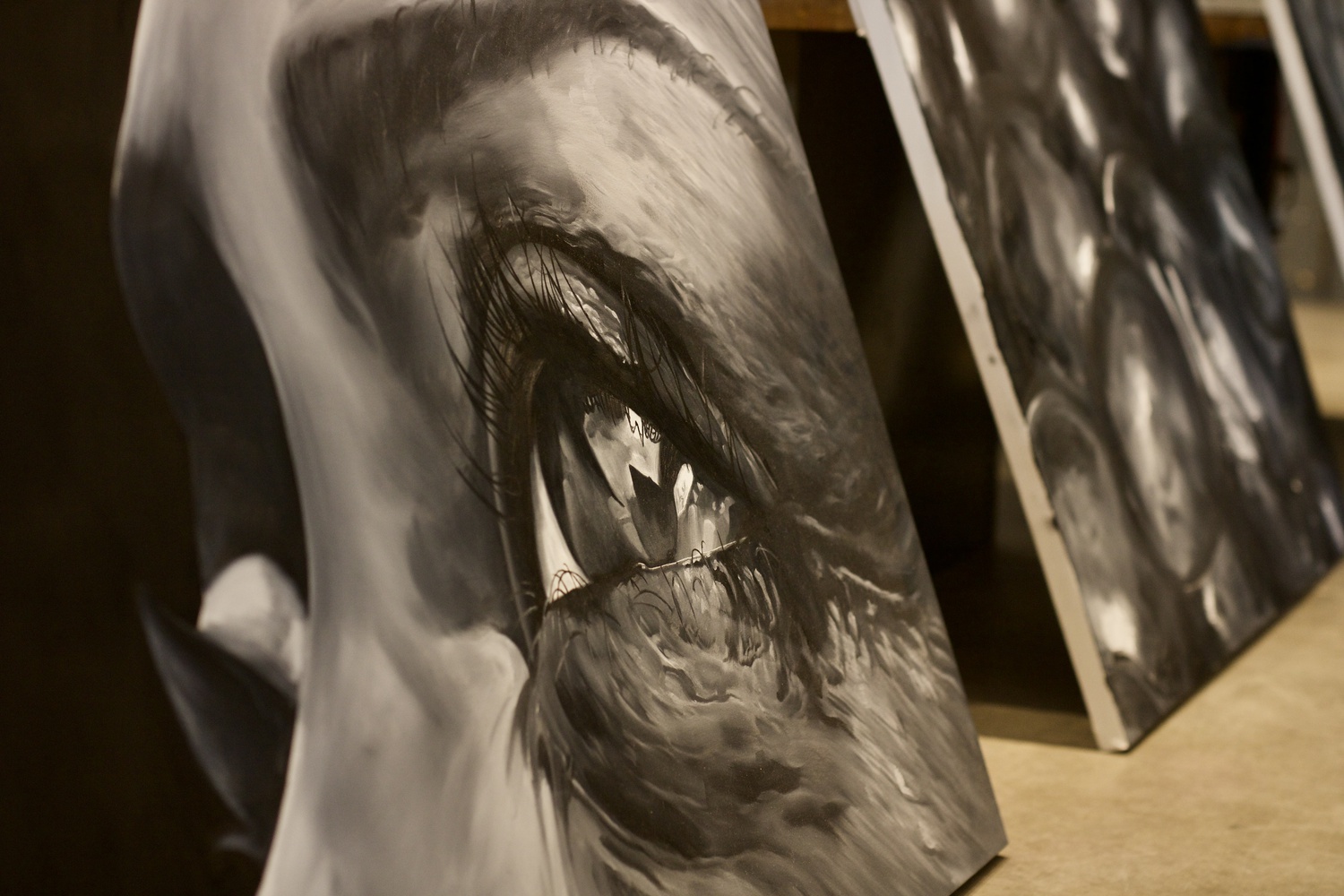 Obielumani N. Amudo ’23 does much of her painting work in the Carpenter Center. By Ben Y. Cammarata

At night, however, she says the studio can feel “lonely” and “eerie,” with its darkened windows’ endless reflections. “Like, what’s out there?” she asks, laughing. It’s part of the reason she’s “always trying to bring people here.” Grady also says that she enjoys the space most with company. “It’s cement floors and cement columns. It’s not necessarily the most warm space,” she admits. “The people really do make it.”

Both Grady and Amudo say they often urge their non-AFVS friends to come work in the Carpenter Center with them while they paint, sculpt, or print. They agree that more students ought to take advantage of the building, even just as a space to study or hang out with friends. “If you go here and you have an opportunity to walk around the space, or look at student art, or take a class, or go with a friend who takes a class when they’re begging, you should definitely do it,” Amudo says. “It’s a very different energy in here than other spaces I’ve been at Harvard.”