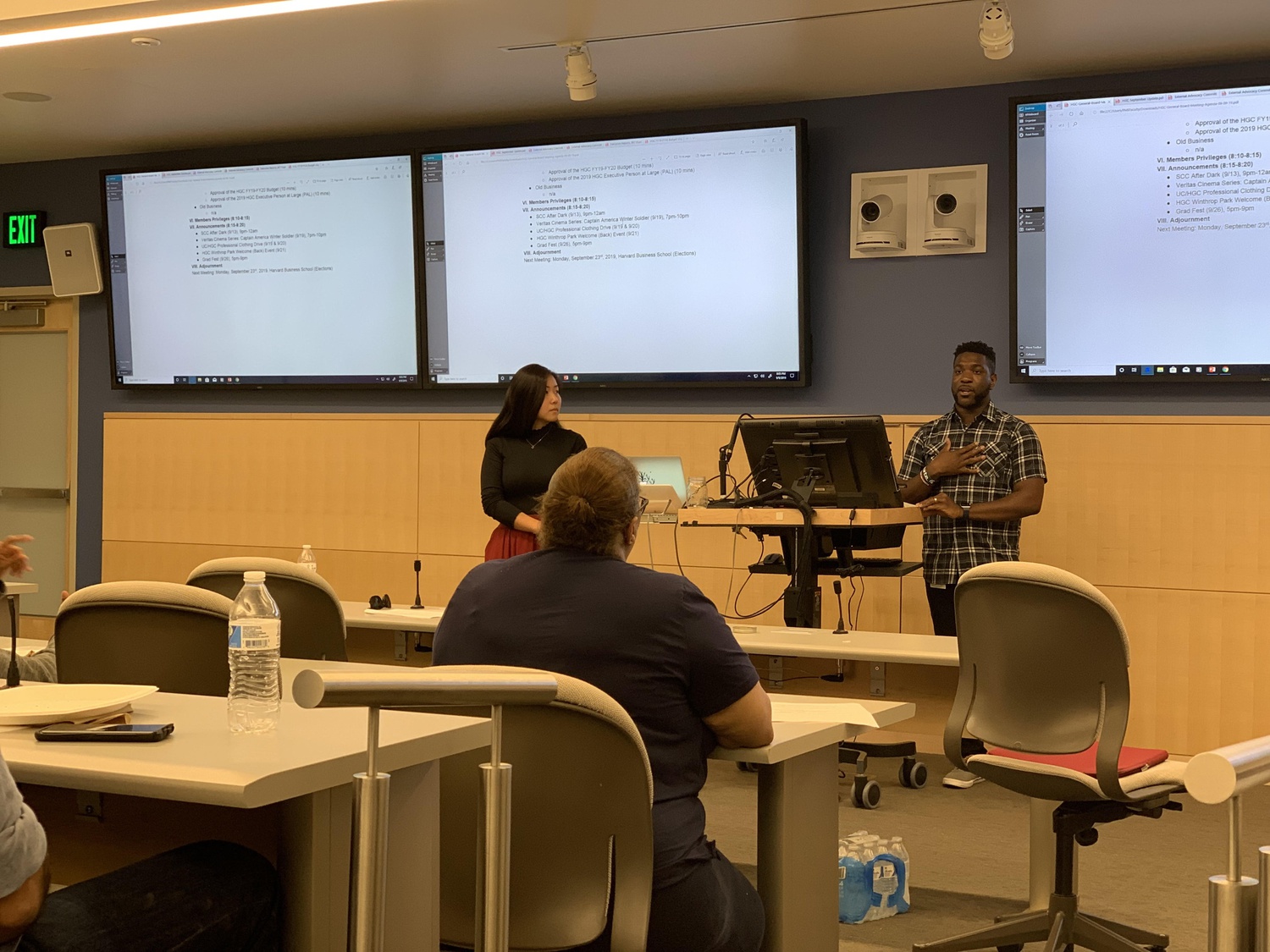 Harvard Graduate Council President Chanthia C. Ma, left, who was then the Council's Vice President, and then-President Bryan O. Buckley speak at a 2019 Council meeting. By Luke A. Williams
By Isabella B. Cho, Crimson Staff Writer

The Harvard Graduate Council mulled student government priorities and institutional challenges brought on by the Covid-19 pandemic in its first public meeting of the semester Wednesday evening.

The Council — which represents all twelve of the University’s graduate and professional schools — communicates graduate student needs with Harvard administrators including University President Lawrence S. Bacow and Provost Alan M. Garber ’76. Wednesday’s meeting marked the start of biweekly public meetings, held over Zoom during the pandemic.

The meeting opened with remarks by Harvard University Health Services Director Giang T. Nguyen, who said there will “probably be stages” to the potential reopening of campus come fall. Despite a recent decline in Covid-19 cases across the country, the risk of infection remains due to the emergence of new variants, Nguyen added.

“I want to remind folks that we’re not out of the woods yet,” he said. “We have seen some variants of the coronavirus that have spread to the United States — the B117 variant, which is commonly referred to as the U.K. variant, has appeared not only in the U.S., but in Massachusetts.”

Nguyen commended the efforts of student leaders across the University to ensure widespread adherence to safety regulations — citing an overall test positivity at the University of under 1 percent — but urged students to continue exercising caution in the coming months.

“It’s really important for us to remember that we’re standing on a three-legged stool above a flood of Covid,” he said. “That three-legged stool is based upon masking, distancing, and hand-washing — we need to do all three of those things, or else the stool is going to topple over.”

Harvard Kennedy School voting representatives Emily K. Mello and Nicholas “Nick” J. Cannella then provided a virtual “tour” of the Kennedy School, followed by a presentation of the school’s priorities and challenges during Covid-19. The twelve graduate schools rotate “hosting” HGC meetings, a practice that has extended to the virtual format.

“As you all were in the fall, we were completely online. We heard a lot from students about the challenges that that posed, and particularly, of course, from international students who were dealing with totally disparate time zones, and feelings of disconnection from the Harvard community,” Mello said.

Promoting anti-racist initiatives — including pushing for more tenure-track faculty of color— remains a student government priority for the Kennedy School, Mello added. She said progress has been made on the anti-racist front in recent months.

“The administration has agreed that Dean Elmendorf and his direct reports are going to be undergoing an anti-racism workshop led by a partner we’re working with, Community Change, Inc.,” Mello said. “And we did start — for the first time this semester — a core course for public policy students on race and racism in the making of the U.S. as a global power.”