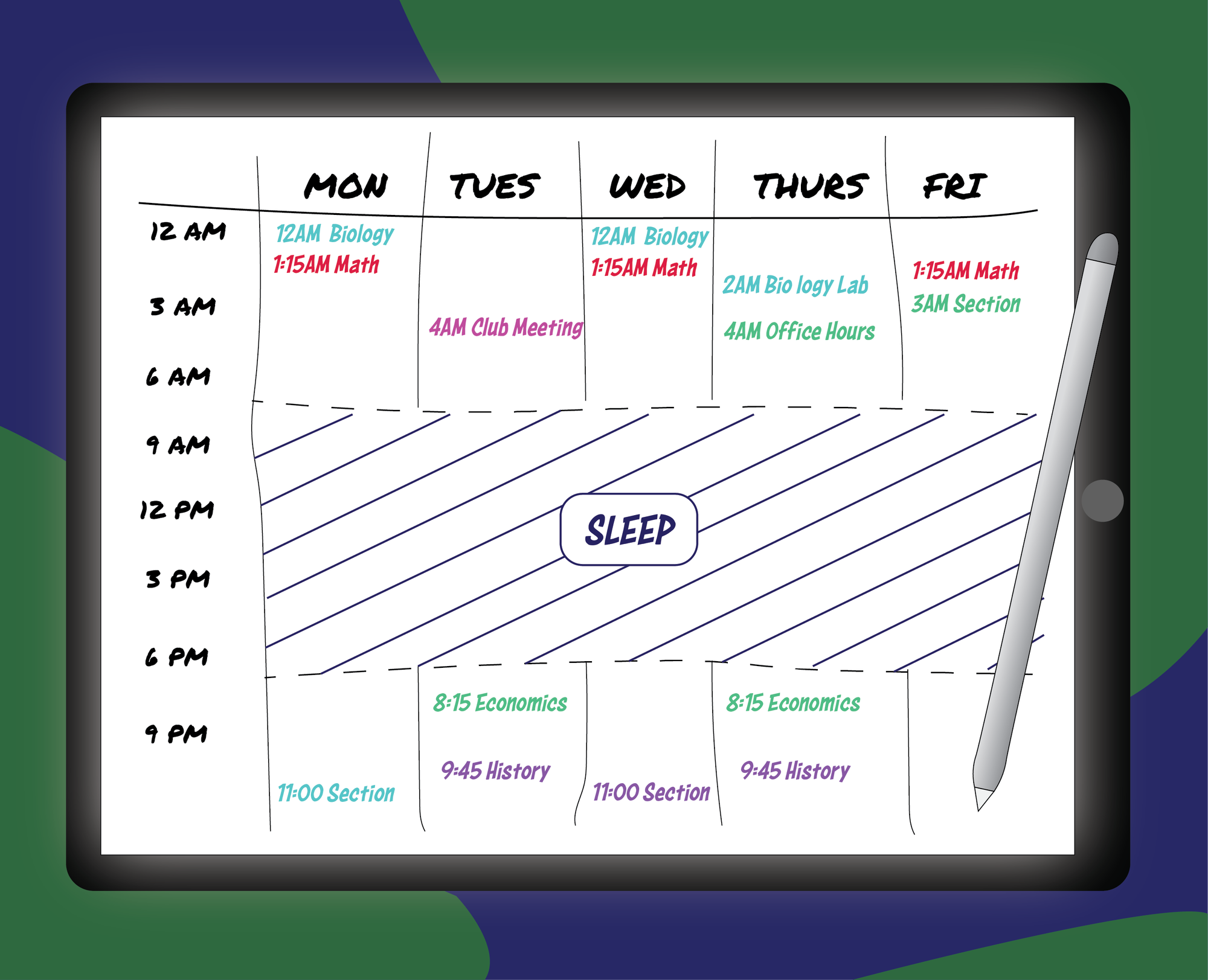 More than a dozen international freshmen said they attended classes after 10 p.m. in their local time zones with some lectures, sections, and club meetings running into the early hours of the morning. By Yuen Ting Chow

More than 20 international freshmen interviewed said their first semester of college was marked by nocturnal schedules, social isolation, and inadequate support from the College. Many said they feel pessimistic that things will get better this spring.
By Alex Koller and Taylor C. Peterman

Like many Harvard students, Nabin Poudel ’24 stays up late to complete his assignments in time for typical midnight deadlines.

Unlike others, though, midnight in Cambridge falls around 10 a.m. local time the next morning for Poudel, who is taking classes online from his home in Nepal this academic year.

“Sometimes I would find myself working [the] whole night on assignments,” Poudel said.

Though a federal policy barring international students enrolled in online-only academic programs — including Harvard’s — from residing in the United States was reversed last summer, the about-face did not apply to freshmen.

“I am writing today to share the difficult news that our first-year international students will not be able to come to campus this fall,” Dean of the College Rakesh Khurana wrote in a July 21 email to international freshmen.

For the fall semester, the College welcomed freshmen in the U.S. back to campus, as well as a select number of international upperclassmen. Juniors, seniors, and students with special circumstances are living in Harvard’s dorms for the spring semester, which began on Jan. 25.

More than 20 international freshmen interviewed said their first semester of college was marked by nocturnal schedules, social isolation, and inadequate support from the College. Many said they feel pessimistic that things will get better this spring.

Khurana told The Crimson in a late January interview that he acknowledges the College’s efforts to support international freshmen have been flawed.

“I wanted to acknowledge right up front, these efforts have not been perfect,” he said. “The College has been constrained by public health guidance, by uncertainties and unpredictabilities.”

Khurana also commended international students for adapting to their circumstances.

“I’m really grateful for their patience [and] have been inspired by the work that they are doing,” he said.

Though she tried to make the most of the fall, Matilda Marcus ’24, who took classes at home in England, said her first semester was distressing.

“There are 100 of us who are all living a unique experience that nobody at Harvard has ever experienced,” Marcus said. “And nobody seems to care.”

A Different Set of Expectations

Less than a week before the start of the fall semester, while most students finalized course schedules and browsed syllabi, S. Tabasom H. Monfared ’24 was trying to access Zoom.

Monfared, who spent the fall at home in Iran, said she had difficulty using digital applications required for her online classes.

“Because we’re under the U.S. sanctions, I cannot use Canvas, Gradescope, even my Harvard email without using [a Virtual Private Network],” she said. “I contacted my dean [and] the [Harvard] International Office, and I told them, ‘What should I do? Because Zoom is prohibited.’”

Though Monfared was eventually able to download a VPN, she said the last-minute inconvenience was “very stressful.”

Once she gained access to Zoom, Monfared would join the video platform late at night to attend her courses from 4 p.m. to 11 p.m. local time. Often, she said, she stayed up after class working on problem sets.

More than a dozen international freshmen also said they attended classes after 10 p.m. in their local time zones with some lectures, sections, and office hours running into the early hours of the morning.

Samuel H. Taylor ’24, who studied at home in New Zealand, said conforming to an Eastern time zone schedule — roughly 18 hours behind his local time — was necessary to participate in “anything interesting or vaguely specialized.”

Khurana said the College has introduced a new tool that will show course instructors the time zones in which their students live, enabling them to “make more informed decisions” as they plan for this semester.

Many international freshmen said teaching staff were already empathetic toward their circumstances, and that they enjoyed their coursework.

Sakiko Miyazaki ’24 said her instructors worked “their butts off” to help her.

One professor, Miyazaki said, emailed her directly about his willingness to accommodate her time difference after she indicated interest in his class.

“I really, really appreciated that because I had to cold email professors out of the blue, being like, ‘Hi, this is a random freshman from Tokyo, Japan. I would love to take your class, but your time doesn’t work. Would you be able to consider accommodations?’” she said.

Still, Wamalwa Ochieng ’24, who took classes from Kenya, said the University should be more considerate of the unique disadvantages facing international students.

Miles, oceans, and time zones away from Harvard Yard, international freshmen also said they felt isolated from the rest of their class, and that they sometimes questioned their connection to Harvard.

“If you were to ask me whether I’m a Harvard student right now, I would think for a second,” Liyanage said. “I’m more connected to my high school right now.”

Many students said they struggled to balance sleep with nocturnal extracurricular schedules and sought friendships transcending hemispheres to limited success.

Fadzai M. Ngwerume ’24 said her social life last semester was “a bit of a disappointment.” Due to the fact that most club meetings occurred in the middle of the night local time in South Africa, she said she “gave up” on attending.

Poudel said he had looked forward to joining clubs at Harvard to find a niche on campus. His inability to participate due to the time difference, he said, was “the worst thing that happened” during his fall semester.

Marcus said she was discouraged by the dearth of opportunities to get to know her classmates beyond Zoom breakout room discussions. 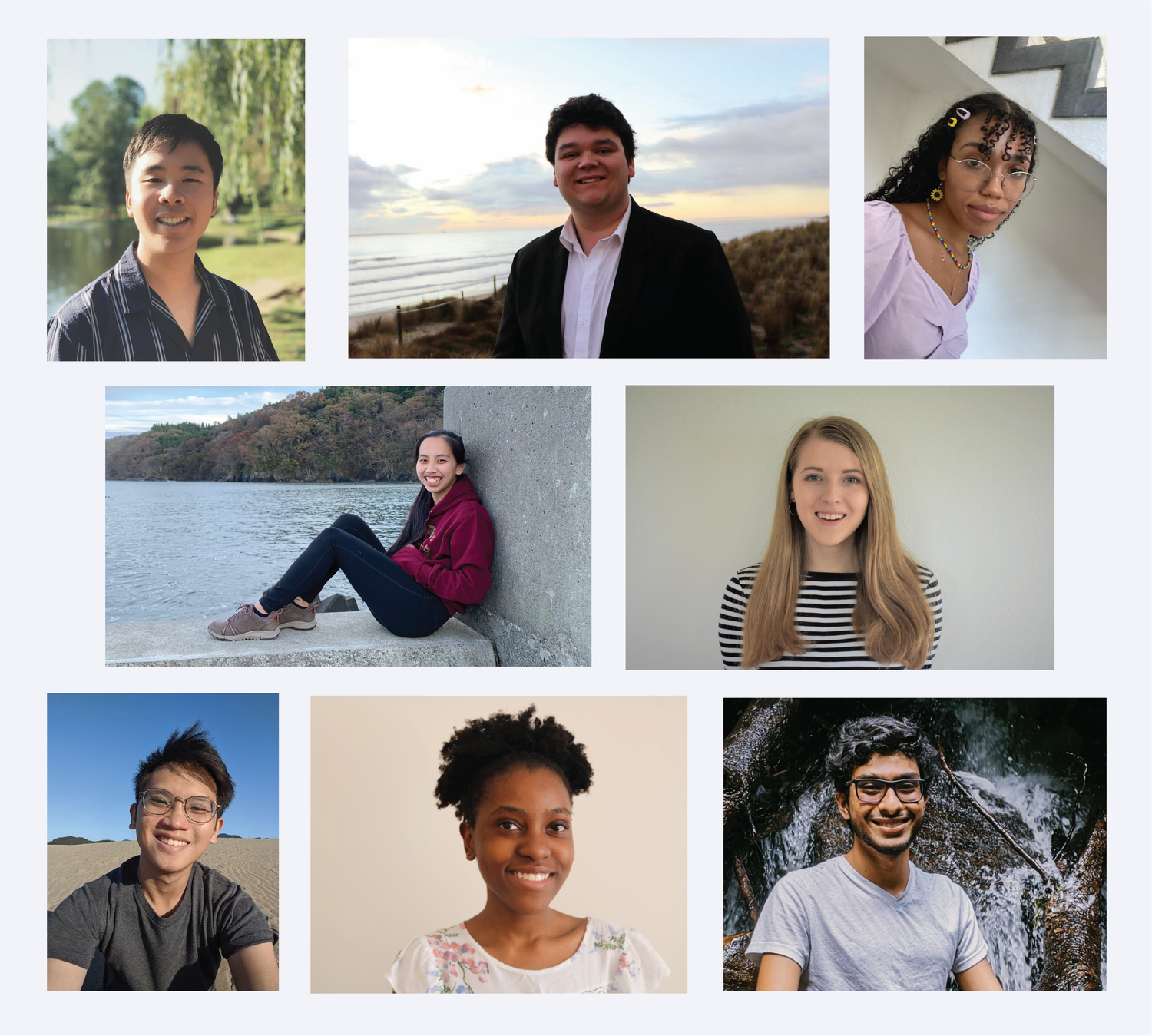 Many international freshmen said the First-Year International Program — an annual pre-orientation program for students who live abroad — helped them get to know other students in similar circumstances.

Still, as they look ahead to blocking — the annual process in which freshmen choose classmates with whom they want to live in an upperclassman house — some international freshmen said they feel unprepared.

Danai-Christina Avdela ’24, who took classes from Greece, said blocking is “really weird and difficult” for international freshmen this year.

“Even if you have people you want to block with, you haven’t really met them in person,” she said. “You don’t really know if you can live with them.”

Having never spent a semester on campus, Marcus said she does not understand blocking’s significance.

“I don’t know what anything looks like — I’ve never seen a building,” she added.

Nekesa C. Straker, senior assistant dean of residential life and first-year students, wrote in an email that the Dean of Students Office has “coordinated” with the Office of International Education to “best support [the] international student population.”

The DSO created a new position, which has been filled by a graduate student, to serve international freshmen, Straker added.

‘Out of Sight, Out of Mind’

Marcus said the rigor of the fall semester forced her to invert her sleep schedule. She said she would go to bed at 5 or 6 a.m. and start her day around 2 or 3 p.m. local time.

That lifestyle had “major effects” on her mental and physical health, including rapid weight loss, and prompted her to seek therapy.

“All of my classes were in the dark,” Marcus said. “I had to decide to either not get enough sleep or sleep enough and not see any daylight.”

Others said their mental health suffered without strong support networks.

“It’s really hard to text a friend and be like, ‘Hi, I’m sad. Please make me feel better,’” Miyazaki said. “There’s often a point where you’re like, ‘Oh, is it worth it?’”

Samuel Ho ’24 said he felt “caught in the middle” between his academic commitments to Harvard and his life in Singapore. Away from campus, he said he does not feel “important to anyone.”

“You just feel like you don’t really matter to anyone,” Ho said. “You really feel like you’re just out of sight, out of mind.”

Barbara Lewis, chief of the University’s Counseling and Mental Health Services, wrote in an emailed statement that CAMHS “is unable to provide individual therapy or medication management” to students living outside of the U.S. and in states with legal restrictions.

“We welcome participation in our CAMHS workshops by students who are residing anywhere, including internationally,” Lewis wrote. “We also provide initial consultations remotely and may make suggestions on how to pursue counseling or medication management locally in your area of residence.”

“Harvard implicitly invalidated these feelings by not explicitly reciprocating and recognizing the struggles,” he said.

Appeals to the Administration

Ana Breznik ’24, who took classes from Slovenia, said she felt “left out” after reading Harvard’s announcement of its spring semester plans, which offered condolences to sophomores not invited to campus, but made no mention of international freshmen.

“Harvard is often telling us how crucial we are and how invaluable our unique experiences are,” Breznik said. “Sometimes we feel left out still because the actions sometimes speak otherwise.”

Many international freshmen criticized Harvard for sparse communication regarding their access to campus this spring, including whether they would be able to secure a visa. Breznik said she received only one email throughout the fall providing her information on U.S. visa guidelines.

Overall, students said they did not receive adequate support and counsel from Harvard as they struggled to navigate an unusual first semester.

“All we can do is advocate and ask people to really think about first-year international students,” she said. “We can’t enforce that those things happen.”

Nardozzi said she acknowledges “gaps existed” in the OIE’s support of international students.

Unsatisfied with the College’s communication, international freshmen took it upon themselves to contact administrators seeking answers and relaying their concerns.

Taylor said he felt compelled to pen a letter to University President Lawrence S. Bacow detailing his fall struggles because he does not believe the University has “any clue of what life has been like” for students abroad.

“I’ve always been a fan of the idea that education is the great leveler or the great equalizer,” he said. “The experience that the University has left us this semester has left first-year international students feeling like they are second-class members of the Harvard community.”

Marcus, who met with Khurana to air her grievances, said she thought it was unfair students bore the responsibility to contact the College to obtain vital information.

“We’re finding out incredibly fundamental parts of our college experience through the notes of one-on-one meetings,” she said.

Poudel, who also met with Khurana, said he appreciated him for taking the meeting. At the same time, Poudel said it would be more productive if College administrators hosted a forum for international freshmen to voice their concerns and brainstorm solutions.

Even with those ongoing efforts, Ho said he feels hopeless.

“It’s so easy to be forgotten when you don’t have a physical seat at the table,” he said.