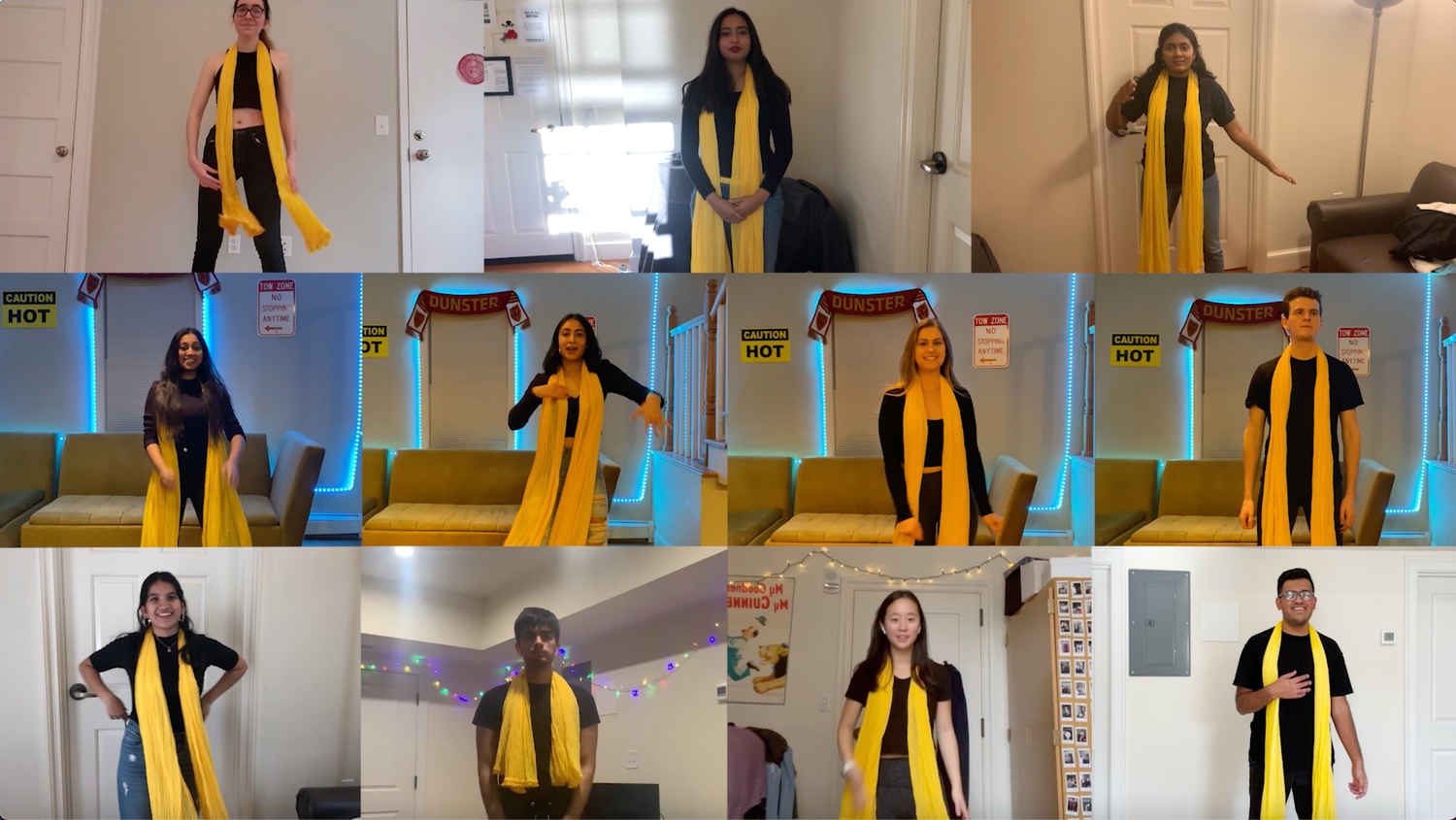 Ghungroo, Harvard's annual celebration of South Asian cultures, will be held entirely virtually this Saturday for the first time in its over 30 years of production. By Courtesy of Anagha Kumar
By Audrey M. Apollon and Leah J. Teichholtz, Crimson Staff Writers

Ghungroo, Harvard’s annual celebration of South Asian cultures, will be held entirely virtually this Saturday for the first time in its over 30 years of production.

The show, which is presented by the South Asian Association, is the University’s largest student-run production. This year, rather than filing into the Agassiz Theater, attendees will enjoy Ghungroo’s music, dancing, spoken word, visual art, and skits from their homes.

When this year’s Ghungroo directors started planning for the show last May, the possibility of an in-person performance was still up in the air.

“In the summer, we didn't know what was going to happen in the spring,” co-director Dhwani Bharvad ’22 said. “We just had to be more dynamic, so we had lots of backup plans and different ideas.”

As it became evident that it would be impossible to hold the event in person, the Ghungroo team shifted to a virtual format, holding rehearsals on Zoom throughout the winter and ultimately compiling hundreds of videos that performers filmed of themselves.

“Instead of walking to the Quadrangle to go have practice at the SOCH, you're instead logging into a Zoom call,” Ghungroo co-producer and SAA co-president Fariba Mahmud ’22 said. “Instead of having rehearsals and creating the set in the Agassiz Theater, instead you're making graphics online to incorporate into the video of the show.”

Arjun J. Prasad ’22, Ghungroo co-producer and SAA co-president, said that advertising for the event also changed. Students were no longer able to distribute tickets in dining halls or publicize in newsletters.

“However, we have been able to maintain our other pub methods — so house lists, club lists, email lists, word of mouth,” he said. “Personal reach out to family, friends.”

Choreographer and costume director Anika Bagaria ’24 said logistical challenges included mirroring dance movements on video or having more people on a call than could be shown on the screen at once.

Still, the primary challenge for Bagaria and the other over 70 members of the Ghungroo Tech and Production team was fostering a “vibrant” community online, she said.

“That's why people do Ghungroo, it's to have fun and just meet people. And so we found ways definitely to find that community, which is really great,” Bagaria said. “I'm happy it worked out, but that was definitely the biggest challenge.”

The theme of Ghungroo 2021 is #Connection. Ghungroo co-director and former Crimson Multimedia chair Ryan N. Gajarawala ’22 said he and the other directors chose the theme for a year which has “torn apart our lives” and scattered Harvard students across the globe.

“We've been able to unite and build a shared appreciation for South Asian cultures and that connection to not only South Asian cultures but also to each other,” Gajarawala said. “This experience has bonded a lot of people and brought a lot of joy, and I think that's the message we're trying to send.”

Aside from having to significantly adapt the production, the virtual setting has come with silver linings. The directors said one advantage was the opportunity to offer Ghungroo to a broader audience.

“There's always been a handful of alumni who have very strong ties to Ghungroo but can't make it because they live across the world, but this year the fact that people from literally anywhere in the world can join is super special,” co-director Anagha B. Kumar ’22 said.

Like in previous years, hundreds of students will perform in this year’s installment of the show. Mahmud called it a “testament to Ghungroo and the community” that the participation of dancers and musicians has remained strong despite the show’s virtual format.

“Students have really put so much joy and love into this year’s show, especially in a year that's been really tough to get participation in general,” she said.

Prasad said one memorable aspect of this year’s programming has been the involvement of freshmen, especially given they have never experienced Ghungroo in-person.

“Getting so much support and help from first-years has been, quite frankly, one of my favorite feats of the show,” Prasad said.

Bagaria, who is a freshman, said the production was “a huge reason” she was excited to attend Harvard. Though she was initially disappointed it would be held virtually, she nonetheless wanted to participate and help run the show.

“As a freshman, I always wanted to get involved, and I was like, ‘Alright, you know what, it's gonna be virtual, that's a fact. Let's try to make it the best that it can be,’” she said.

Gajarawala said he was “in awe” of the innovation and collaboration of the performers and the Ghungroo Tech and Production team for creating the virtual event entirely “from scratch.”

“The legacy of Ghungroo didn't die, even amid the pandemic,” Gajarawala said.