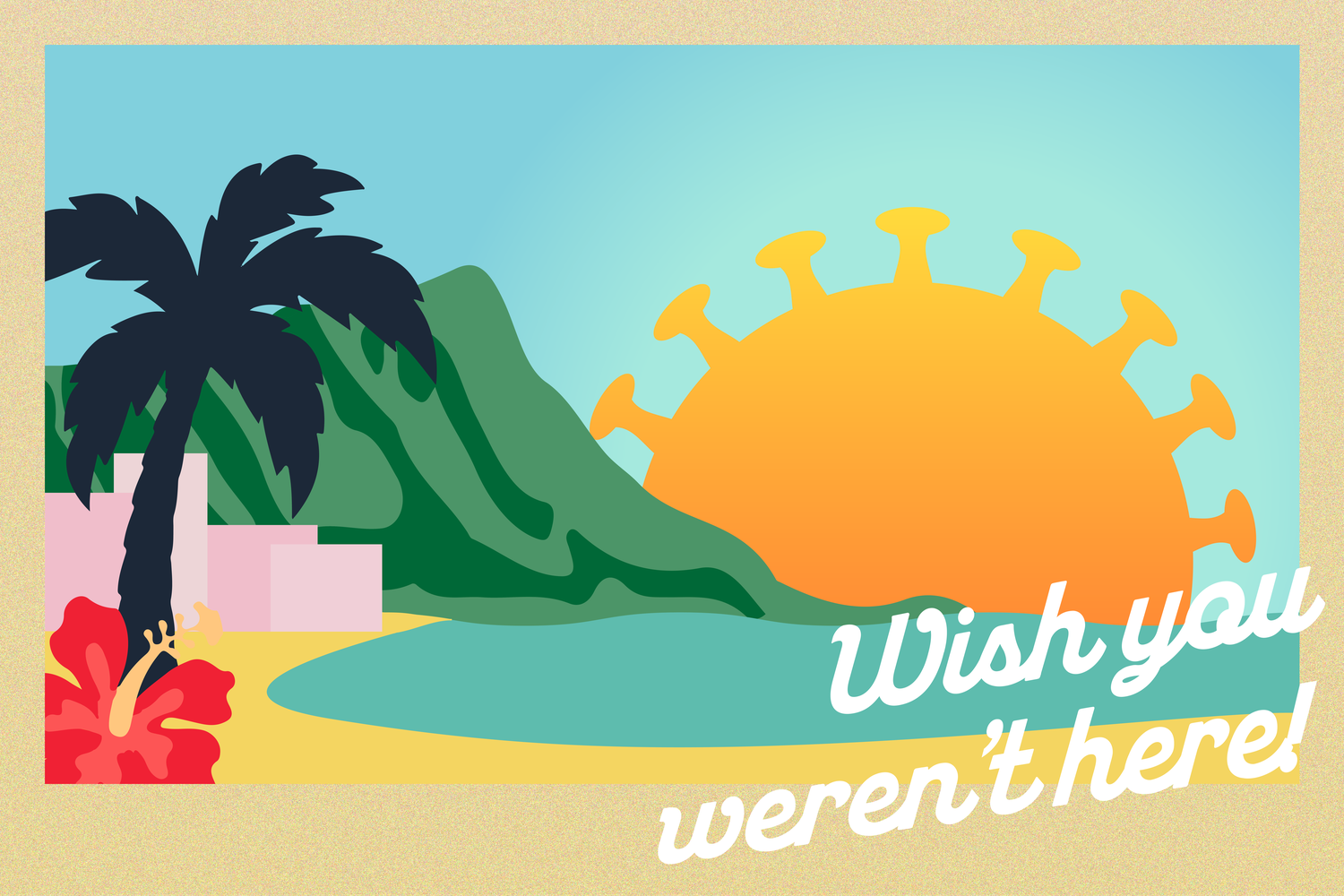 Unpacking the Baggage of Hawaii's Tourism

In “A DAY IN MY LIFE LIVING IN HAWAII,” Sienna R. Santer ’22 shows us exactly what we’re missing. In a video sponsored by Lululemon, Santer chats to her hundreds of thousands of subscribers as she performs her daily summer activities, which include a hike to a secluded tide pool, a swim in her manicured backyard, and sunset yoga on an empty beach. Beneath meticulously composed shots of footprints in the sand is appropriate paradise mood music: a thrumming, lazy beat, welcoming and warm, creates a dreamy anesthetic that numbs viewers to their “imperfect” realities so they can fantasize about what their lives could be.

Santer’s presentation of Hawaii, however benign her intentions, oversimplifies the truth about the islands. It’s not that the images she features are too pristine; the places themselves are recognizable, at least to me, and are accurate in their gorgeousness. There is, however, a gaping hole in the 16-minute video: Santer never once depicts a hint of local culture. With the exception of the title and one instance of overlaid text which blares “Makapu’u Lighthouse Trail,” she does little to indicate that the scenery she flaunts isn’t that of some other tropical isle.

Though perhaps the most visible, Santer isn’t the only Harvard influencer to mine Hawaii for its photogenic landscape. Clusters of Insta-happy Harvard students with tens of thousands of followers apiece have popped up in Hawaii over the course of the past year, flocking to a domestic quarantine location that contains an enticing flavor of exoticism. (Santer did not respond to a request for comment.)

I have mixed feelings when it comes to student tourism in my hometown. I absolutely love leading visitors to my favorite spots (the top of Kuliouou Ridge! Bellows Beach! Maunawili Falls!), feeding them the best local food, smiling when they try something sour and delicious and new. Giving these tours is a way to remind myself of the parts of Hawaii that I take for granted day to day. But the portrayals of Hawaii as a party paradise for slender college kids holding beers or backflipping into blue water rubs me the wrong way. I find this kind of vacation porn reductive: It erases the state’s complicated identity.

My local friends welcome both student and general tourists, but are also wary of their potential insensitivity. Ryan K. Hong ’22-’23, for instance, loves hosting people who are “willing to learn about Native Hawaiian culture,” but knows of some tourists who disrespect cultural sites, adopting the mindset of “‘Oh, this is my vacation, so I can do whatever I want.’” Micah I. K. Williams ’23-’24 explains that Hawaii has a “distinct set of values” which tourists sometimes overlook. “It’s about caring for the environment and respecting the place and culture,” he says. He returns my call from an Oahu farm full of noisy chickens.

Hawaii’s history as a monarchy violently overthrown by Western powers further complicates the relationship between locals and visitors. Nicholas L. Amador ’22 notes that locals often joke about being irritated by tourists, but the sentiment comes from “a real place of frustration.”

And yet it is these outsiders that provide Hawaii’s main source of income and attract investment in the state’s infrastructure. The pandemic hit Hawaii with a devastating economic recession. With borders sealed, entire swaths of the island designated for tourism were barren. Expensive restaurants in Waikiki shuttered their windows with plywood. Empty hotels made the once glittering skyline dark and ominous.

The effects of the pandemic haven’t been entirely unfavorable. For the first time since Hawaii’s colonization, locals could enjoy their home without being forced to share it. Laughing, Pomai K. K. Ogata ’23 admits, “It was kind of nice during Covid when there were no tourists — the beaches were completely free.” Popular tourist spots are now less likely to be littered with trash; regions with reefs and sea life have had the time to recover from the poisonous effects of chemicals found in tourists’ sunscreen.

Now that restrictions have loosened, some locals have voiced disappointment about the return of foreigners. The story has even made regular appearances in The New York Times. Ogata points out, though, that those from developed areas of the state, who know firsthand the economic benefits of tourism, are more likely to forgive tourists for “mistakes” such as cultural ignorance and littering. By contrast, when I accidentally texted a random auntie from the rural Big Island about this article, she responded, “Tell the student tourists to go home!”

I think it’s possible for Hawaii to reject this binary altogether, providing a model for responsible tourism. Over the past year, I and almost all of my local Harvard friends have hosted college peers either in our homes or informally as tour guides. I agree with Williams that the most rewarding and educational trips to the islands involve interactions with locals. He says that tourists who aren’t guided by someone familiar with the area “miss out on that extra experience.”

Visitors without a connection to the island must resist the inertia to enjoy Hawaii as passive observers. Jessica Lee ’23-’24, for example, visited Maui for four weeks this March. Despite being insulated in a resort area, she was determined to gain a fuller understanding of the island. Though she did not conduct any research on Hawaii’s history beforehand, Lee compiled a list of activities that could educate her while she was there. She and her friends drove the Road to Hana, a lush, winding path along Maui’s East side, and traveled to see the Olowalu petroglyphs, rock carvings that serve as a tangible trace of ancient culture. The trip introduced her to aspects of the local mindset she hopes to bring home to California, which include “the aloha spirit” as well as “Hawaii Time,” a concept which may sound familiar to Harvard students.

But Robert A. Harraka Jr. ’24 found that “paradise” had more problems than travel TikToks — like the ones Lee makes — revealed. An avid surfer from California, Harraka quickly adapted to the lifestyle of paddling out each day after work on Oahu’s South Shore. Although he was stunned by Hawaii’s natural beauty and its affectionate people, he confesses that the isle was not exactly the rosy haven he had expected. “A lot of the Indigenous peoples get abused and ignored, the infrastructure is lacking, public funding is lacking,” he says. “And you ask yourself, ‘Am I helping? Or am I making the problem worse?’”

Harraka’s experience is a testament to what I see as the impossibility of separating Hawaii’s culture and place. The two should be married to each other: visiting the physical location should entail accepting the responsibility of taking care of the surrounding environment (malama aina) and educating yourself on the colonial history of the land. Instead of thinking solely of what they can “take away” from a trip, whether that means memories, souvenirs, or photographs, tourists should also think about what they can “give” in return.

Williams puts it well: “People are coming to Hawaii and saying ‘What can I see? What can I take home? Where can I get the best pictures?’ You don’t have to throw all that away, but you should come with the mindset of ‘What can I do? How can I appreciate the culture and support locals? What choices can I make as a tourist that improve the place I’m visiting instead of just taking away from it?’”

As Hawaii continues to open up and students anticipate traveling in an exciting, post-Covid world, I hope they remain cognizant of the folks who live there full-time. Student tourists’ experience of Hawaii will only become richer when they learn about its bloody history and interact with its local people. It will not only make their days in so-called “paradise” more meaningful, but will also allow Hawaii to break free from an entrenched colonialist approach to tourism. Otherwise, students’ glitzy Instagram posts may as well be manufactured. Otherwise, they may as well be anywhere.