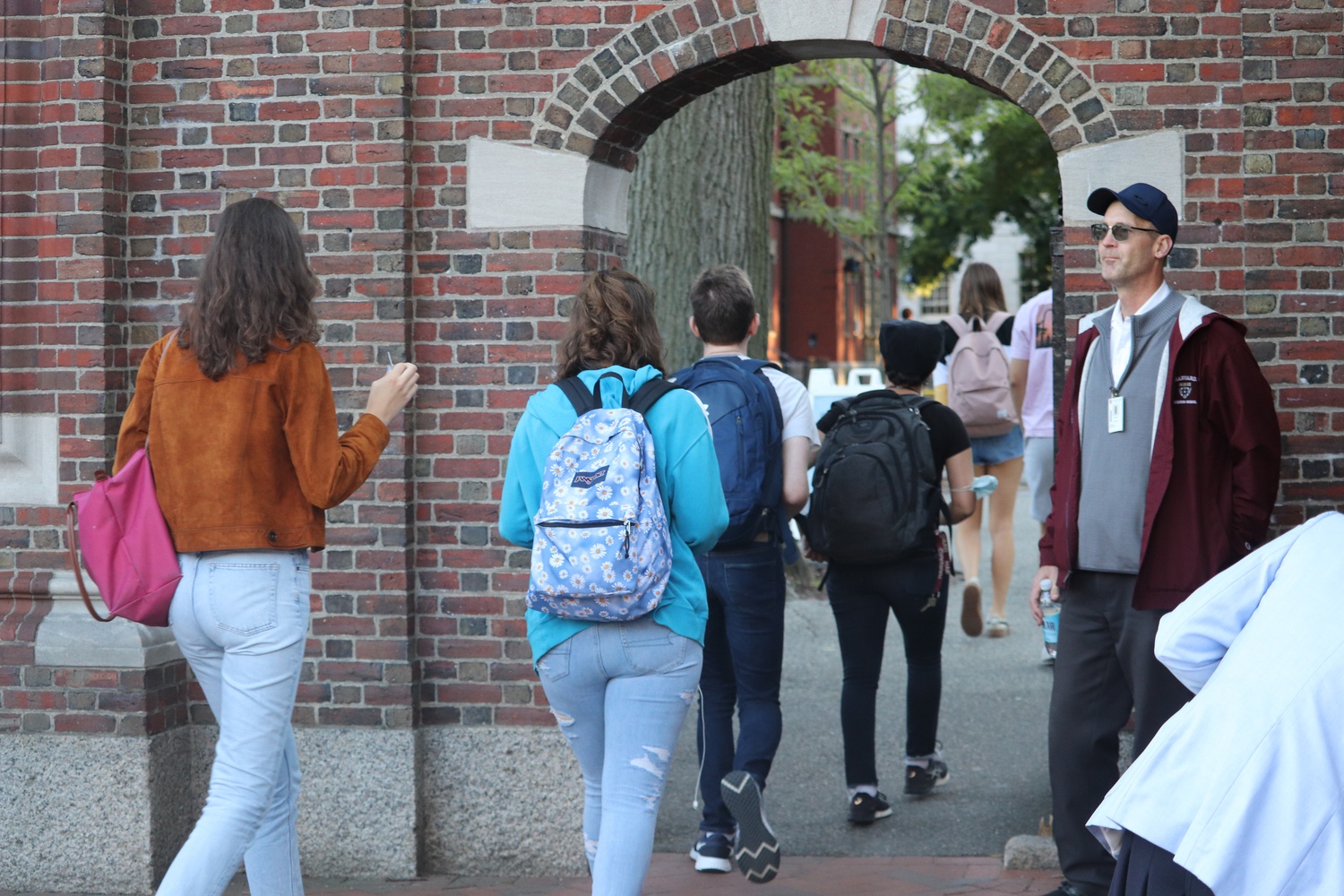 Harvard security guards stop those passing through the North Gate of Harvard Yard to ask for Harvard identification in order to enter. By Truong L. Nguyen
By Noah J. Caza and Vivian Zhao, Crimson Staff Writers

The University is closing Harvard Yard to the public every evening through mid-October, requiring affiliates entering the Yard to show their Harvard ID to security guards between 5 p.m. and 3 a.m., during which only Johnston, Thayer, Widener, and Solomon Gates are open.

College spokesperson Rachael Dane wrote in an emailed statement that the closures — which began for this academic year after freshmen returned to campus in August — are meant to “support the safety and health of our student population” in the first few weeks.

“We appreciate your help with this as we give the first-year undergraduate community the opportunity to adjust to campus life while observing the appropriate public health guidance,” stated a Yard Bulletin email sent to freshmen Monday morning.

The policy was first implemented last fall and will be lifted on Oct. 11, per Dane.

Several students interviewed in the Yard Monday evening said the policy has led to confusion and a variety of inconveniences.

“I was actually traveling back from shopping with my parents and they were like ‘Oh no, [your parents] can’t come in, the Yard is closed,’” Niyah M. Lockett ’25 said of her experience moving in to Canaday. “So I had to take all of this stuff that I bought at the local Target — I had to carry it up by myself.”

The closure of 21 of the gates surrounding the Yard after 5 p.m. has also increased walking time for many students.

“It’s such a force, especially because I live in Pennypacker, which is not in the Yard,” Maia Patel-Masini ’25 said. “It just takes a lot longer and then I’m outside longer than I want to be.”

L. Tania Soerianto, a student at the Graduate School of Education, added that the closures also impact graduate students.

“Because we don’t live in this area — we live in the graduate housing — it’s just a longer walk for us, honestly,” Soerianto said. “It’s kind of confusing where to go.”

Despite the inconvenience, Patel-Masini said the closures make her feel safer when walking at night.

“At night, when there’s barely anyone out, I’m glad to know that the people on campus are just people who go here or are affiliated here,” she said.

Lockett said the changes did not make her feel safer, noting that “it’s not like we did background checks coming here.”

Several students said they wished the College provided more communication regarding the closures and the reasons behind them.

“Please let us know what’s happening,” Lockett said. “It’s not necessarily a good or bad thing, because we don’t really know much about it, but it would just be nice to have that communication and have that transparency.”

She added that the closure hours seem arbitrary to her.

“It’s not like Covid gets off work and then decides to come to Harvard’s campus,” she said, referencing the 5 p.m. closure time.