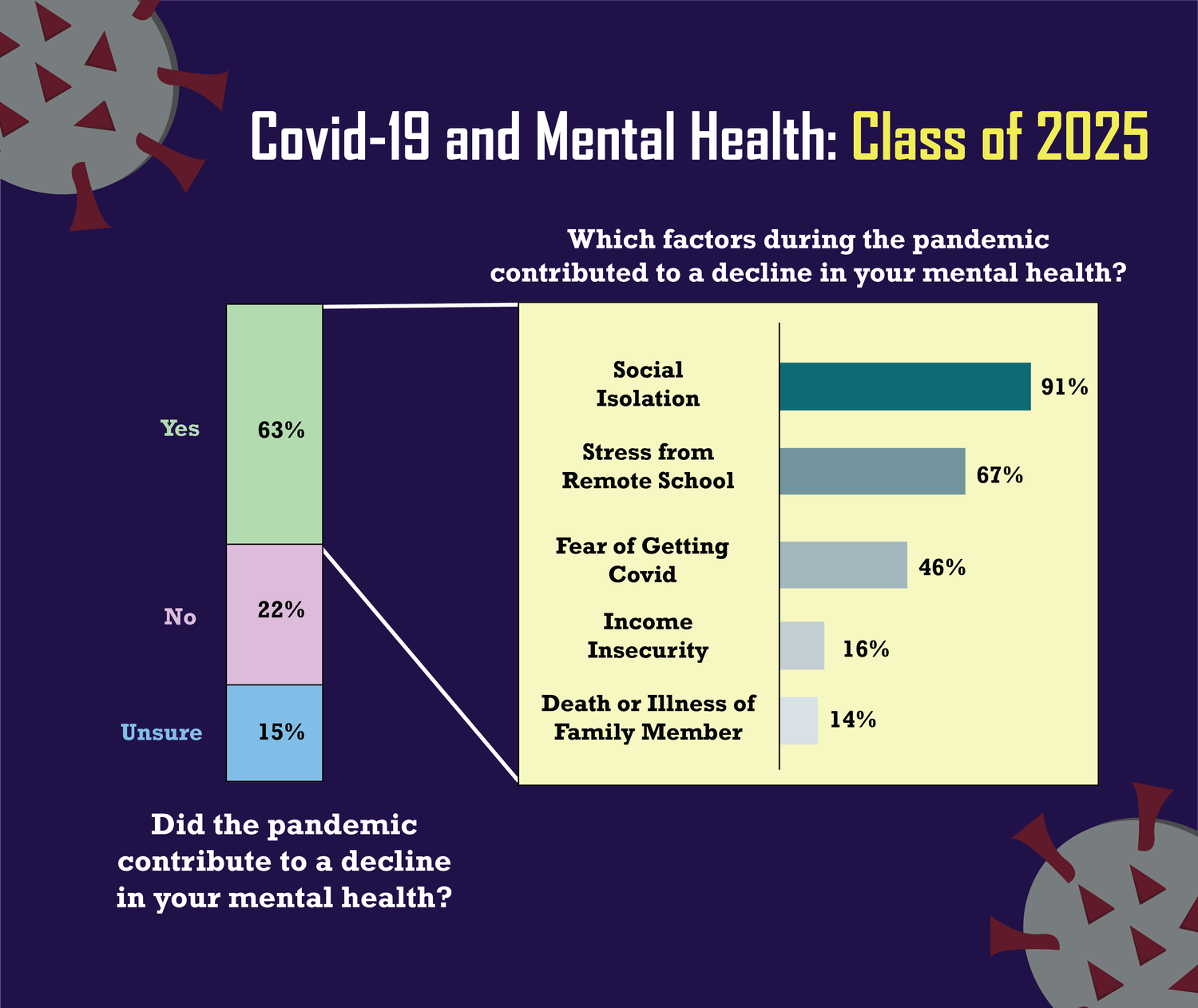 This is Part IV of our Freshman Survey series. Part I is here, Part II is here, and Part III is here. Full data and visualizations will be released later this week.

As freshmen scurried across the Yard last week, many were headed to their first in-person class for the first time in 18 months. This classroom experience was far from the normal, though, with many pandemic norms — including compulsory masking — still in place.

Most members of the Class of 2025 reported spending the entirety of their senior year learning in-person with masks or completely online. Twenty-one percent of respondents indicated that they ended their high school tenure remotely.

Despite the widespread impact of the pandemic, only 14 percent of surveyed students reported contracting coronavirus over the course of the pandemic.

Of those who contracted Covid-19, Hispanic or Latinx students reported the highest percentage of Covid rates at 21 percent, compared to 16 percent of both white and Black students. Asians and South Asians reported the lowest rate at 5 percent.

Just before starting their first semesters at Harvard, roughly 78 percent of freshmen responded to a Crimson email questionnaire about their backgrounds, beliefs, lifestyles, and experiences during the coronavirus pandemic. The anonymous survey explores topics ranging from political ideology to sexual experience to Covid-19’s impact on their mental health. Out of 1,965 students in the biggest class in Harvard’s history, 1,537 responded. The Crimson did not account for potential selection bias in its analysis of the results. Due to rounding, reported statistics may not total exactly 100 percent.

This final installment of The Crimson’s survey of the Class of 2025 examines how students have experienced the fallout of the coronavirus pandemic, their vaccination trends, and views on coronavirus policy.

Students from the Southeast had the highest percentage of those who have had Covid-19 at 16 percent. The Northeast and Midwest reported similar rates at 13 and 12 percent, respectively.

Roughly 24 percent of students whose parents make less than $40,000 annually indicated that they had a close friend or relative who died of the coronavirus. In contrast, only 10 percent of students hailing from households with combined parental income above $500,000 reported a similar phenomenon.

Hispanic or Latinx students reported the highest percentage of those who had a relative or close friend die of Covid-19 at 32 percent, followed by 18 percent of Black students, 12 percent of Asian and South Asian students, and 11 percent of white students.

Some surveyed students also reported the pandemic placing financial strain upon their households. Approximately 9 percent indicated that someone in their household lost their job during the pandemic and 8 percent of students reported having a family member who was furloughed. Hispanic or Latinx students reported the highest rate at 29 percent, compared to 17 percent of Black and Asian or South Asian students.

Adhering to the University’s vaccine mandate for all students, more than 98 percent of freshmen reported having received at least one dose of the coronavirus vaccine, which surpasses the overall undergraduate population vaccination rate of 93 percent. Roughly 96 percent of freshmen have received both doses, while 2 percent of students reported receiving a single dose, according to the survey.

Only 15 percent of students reported receiving a vaccine in June or later, while 8 percent had their first dose before March 2021.

An overwhelming majority of students — 89 percent — reported that they still wear masks in public spaces, indoor or outdoor. Per a Harvard policy, undergraduates must wear a mask indoors, regardless of vaccination status. Cambridge reinstated its indoor mask mandate in public spaces on Sept. 3.