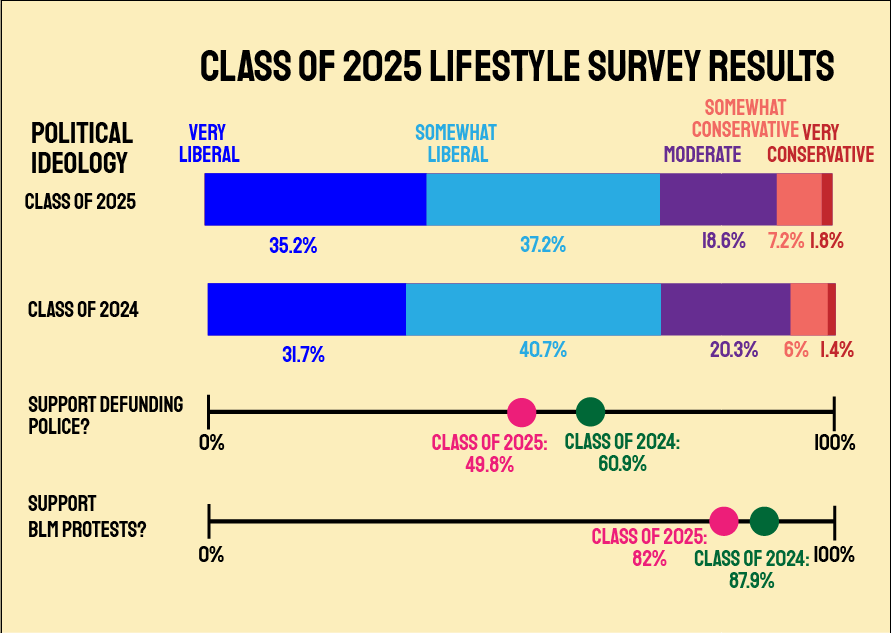 This is Part III of our Freshman Survey series. Part I is here and Part II is here. Part IV will be released later this week, along with full data and visualizations.

In keeping with previous freshman classes, Harvard’s Class of 2025 remains predominantly liberal — with 72.4 percent identifying as either “somewhat” or “very” liberal and 76.2 percent supporting Joe Biden in the 2020 presidential election.

Nonetheless, freshmen’s views on national issues, such as national protests against police brutality and proposals to defund the police, are more conservative this year than those of freshmen last year.

Fewer members of this year’s freshman class — 5.9 percent less — favor national protests against police brutality and systemic racism than did last year’s freshmen. Nonetheless, the percentage of students who attended such protests between the two classes are almost identical: 30.6 percent of the Class of 2024 and 30.7 percent of the Class of 2025.

Just before starting their first semesters at Harvard, roughly 78 percent of freshmen responded to a Crimson email questionnaire about their backgrounds, beliefs, lifestyles, and experiences during the coronavirus pandemic. The anonymous survey explores topics ranging from political ideology to sexual experience to Covid-19’s impact on their mental health. Of 1,965 students comprising the Class of 2025, 1,537 freshmen responded. The Crimson did not account for potential selection bias in its analysis of the results. Due to rounding, reported statistics may not total exactly 100 percent.

This third installment of The Crimson’s four-part survey of the Class of 2025 examines their beliefs on politics, religion, and Harvard issues, as well as aspects of their lifestyle, such as sex, drugs, mental health counseling, and technology.

Of the Class of 2025 who supported a candidate, regardless of whether they were eligible to vote, 87 percent supported Joe Biden in the 2020 presidential election — 3.1 percent fewer than Class of 2024 students who indicated they planned to vote for Biden last year.

Those supporting Donald Trump in the election dropped from 7.1 to 6.3 between the two class years. Of those who supported a candidate, 6.7 percent of the Class of 2025 supported Green Party candidate Howie Hawkins.

Freshmen mostly identified as not at all religious (32.3 percent) or not very religious (21.5 percent); only 2.4 percent of respondents said they were extremely religious.

Regarding the Student for Fair Admissions’ lawsuit against Harvard’s race-conscious admissions process, 27.1 percent of freshmen said they favored the suit, while 25.3 percent responded unfavorably; the rest reported having no opinion or not enough information on the matter.

Among the freshmen, 66.4 percent support the push for Harvard to create an official Ethnic Studies department.

In June, the Supreme Court ruled that certain high-level student athletes could receive increases in education-related compensation for the use of their likeness, although the ruling had little effect on athletes at Harvard. Two-thirds of the freshmen — 66.4 percent — reported being in favor of the ruling, with 4.1 percent opposed.

The Class of 2025 may come into an unconventional campus with rigid Covid-19 testing protocols and masked classes, but they have something in common with previous classes: 62.4 percent of them are virgins. Freshmen who considered themselves to be extremely religious were more likely than their nonreligious classmates to be virgins; 91.3 percent of respondents who said they were extremely religious were virgins, compared to 56.2 percent of respondents who identified as not very religious.

Consistent with previous years, most of the Class of 2025 who reported having had sex said they only had one partner, at 48.1 percent of non-virgins. The number of freshmen who said they had more than one sexual partner decreased with nearly every additional partner, only increasing at the seven and more-than-ten partners mark.

Despite now residing in the motherland of Facebook, 24.6 percent of freshmen reported they did not have an account on the platform. Students favored other social media platforms, with most having accounts on Instagram (93.5 percent), YouTube (91.3 percent), and Snapchat (81.4 percent).

TikTok took up the majority of the Class of 2025’s attention, with 80.4 percent of freshmen who use the app spending more than 15 minutes a day on TikTok. Approximately 10.7 percent of TikTok users spent more than two hours on the platform per day, the highest of any other social media app.

Just over half of respondents — 53.4 percent — said they had a LinkedIn account. Freshmen who reported that they wanted to go into consulting, technology, and entrepreneurship had the highest rates of LinkedIn accounts, at 84.6 percent, 72.4 percent, and 76.6 percent, respectively.