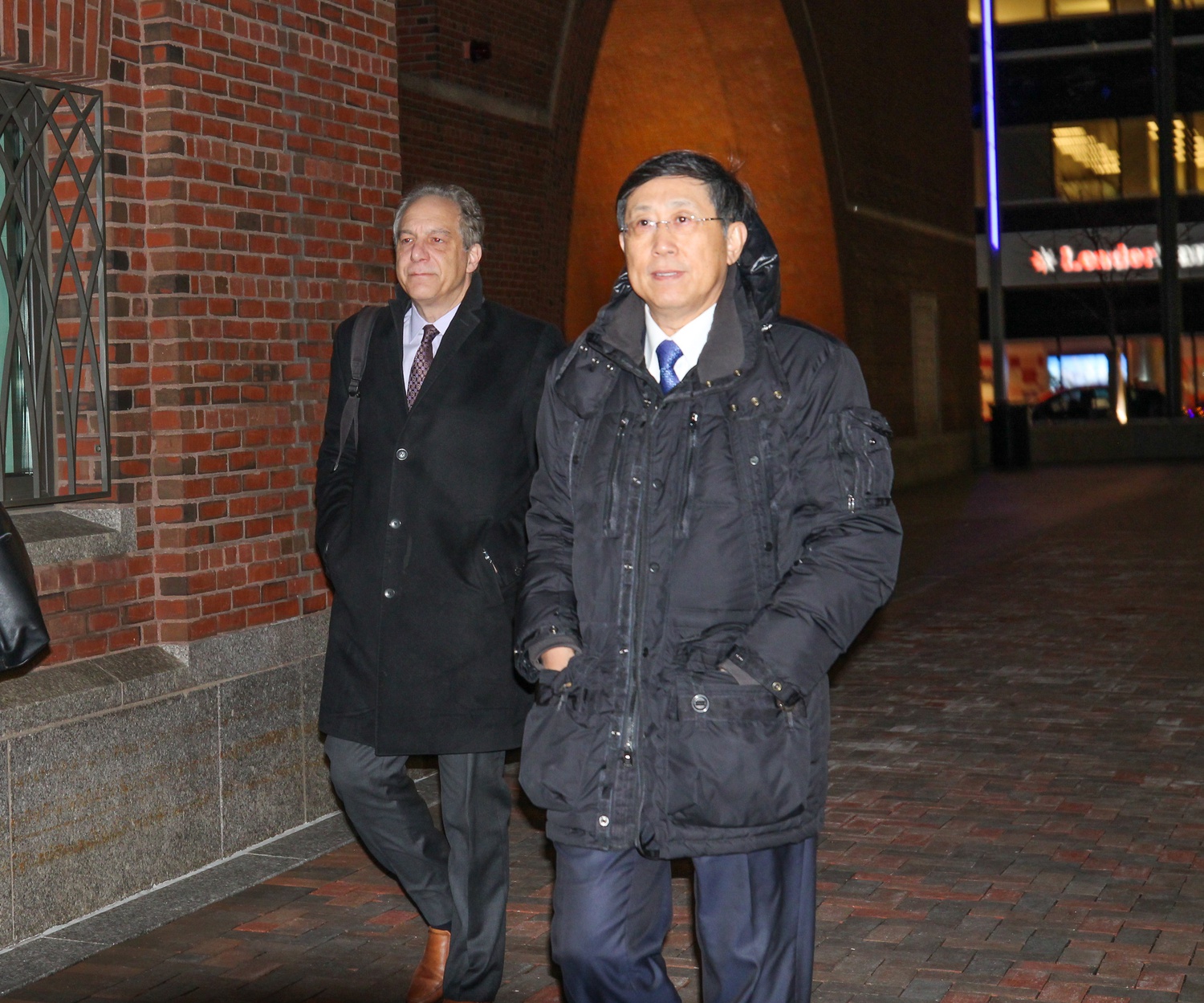 BOSTON – Federal prosecutors and defense attorneys sparred over the credibility of a self-described “middleman” in the alleged admissions bribery scheme between ex-Harvard fencing coach Peter Brand and a Harvard parent in closing arguments Tuesday.

The government alleged wealthy Maryland businessman Jie “Jack” Zhao paid $1.5 million in bribes to Brand in exchange for his sons’ recruitment and admission to Harvard College – while defense attorneys for both men contended that the prosecutors’ case had significant holes and a lack of supporting evidence.

On the eleventh day of trial, defense attorneys and prosecutors presented their closing arguments to jurors before an audience of spectators that spilled into two courtrooms — with Judge George A. O’Toole Jr. instructing the attendees in the second courtroom to view the proceedings over Zoom.

Defense attorneys sought to demonstrate that the government’s argument depended heavily on key witness Alexandre Ryjik, a fencing coach for Zhao’s sons who told jurors through three days of testimony that he arranged a deal between Zhao and Brand, facilitating the transfer of bribes through his charity to a nonprofit run by Brand.

In his closing argument, Brand’s attorney Douglas S. Brooks argued that Ryjik’s testimony could not be trusted and that Ryjik told prosecutors what they wanted to hear in exchange for a “get-out-of-jail-free card” in the form of an immunity deal.

“Alex Ryjik is a liar and a criminal that the government chose to let loose,” Brooks said. “They gave this thief, this cheat, this liar a license to commit crimes without any consequence.”

“Ryjik is the perfect cooperator because he will throw anyone under the bus to keep himself out of trouble,” said William D. Weinreb, an attorney for Zhao.

Assistant U.S. Attorney Stephen E. Frank ’95 said in the government’s rebuttal that the case was not about Ryjik or his character but about the actions of Brand and Zhao.

Frank told jurors they didn’t need to rely solely on Ryjik’s testimony — advising them to look at Zhao and Brand’s “own words” and actions as evidence of the scheme.

Assistant U.S. Attorney Mackenzie A. Queenin began the government’s closing argument by reading aloud a May 2012 text from Brand to Ryjik — in which Brand appeared to solicit bribes for the recruitment of the Zhao brothers.

“Jack doesn’t need to take me anywhere and his boys don’t have to be great fencers,” Brand wrote. “All I need is a good incentive to recruit them[.] You can tell him that[.]”

“You know what that incentive was – money,” Queenin told jurors. 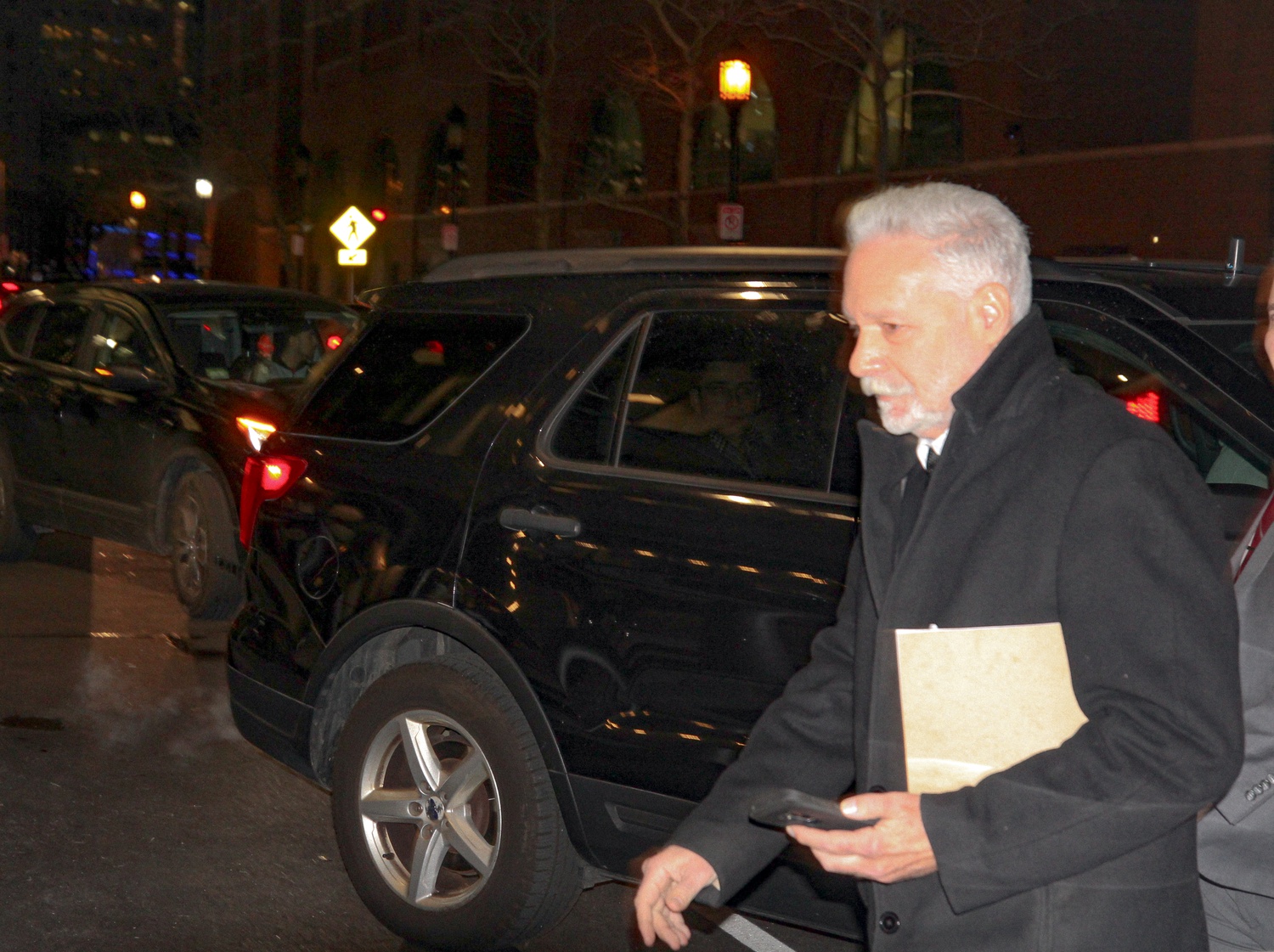 Throughout her closing remarks, Queenin presented slides with diagrams mapping out the alleged scheme, illustrating the series of transactions that made it up, and supporting the case with evidentiary documents presented throughout the past two weeks, including call records, emails, text messages, and checks.

Among the documents shown were signed agreements in which Brand attested he was aware of and would follow Harvard’s conflict of interest policies in his role.

“He knew what he was doing was wrong. The certifications are false, full stop,” Queenin said of the agreements.

Brand was dismissed from his position as head coach of Harvard’s fencing team in 2019 after an internal investigation conducted by the university found that he violated conflict of interest contracts by not disclosing payments from Zhao.

Brooks said the transactions between Zhao and Brand amid the recruiting process were not bribes, and whether or not Brand abided by Harvard’s conflict of interest policy was irrelevant to the charges.

“It might feel wrong, but it’s not a crime,” Brooks said. “A thank-you gift is a conflict of interest, not a bribe.”

Prosecutors sought to show that Zhao paid a series of bribes to Brand, challenging the legitimacy of these payments as loans or charitable donations.

Queenin referenced witness Darlene S. Lesser’s testimony during the fourth day of trial, who said that after donating $1 million to Ryjik’s charity, the National Fencing Foundation, Zhao asked for the money back when Ryjik refused to transfer all the funds to Brand.

“When you give a legitimate charitable donation, you don’t ask for the money back,” Queenin said. “You don’t reach into the Salvation Army jar and stick your hand around and pull your dollar back out.”

Brooks appealed for sympathy from the jury, arguing that Brand had “suffered devastation” and “incredible public humiliation” after the Boston Globe revealed his dealings with Zhao and Harvard fired him for violating its conflict of interest policy.

“It’s partially a Chinese cultural thing, and it’s partially just who Jack is,” he said. “But one thing that it isn’t is bribery.”

In the government’s rebuttal, Frank compared the cultural defense to “throwing a bunch of spaghetti up against the wall to see if anything sticks.”

Attorneys for Brand and Zhao sought to demonstrate that no one was harmed by the actions the government argued made up the bribery scheme.

“There is no victim,” Brooks said. “This is an alleged crime in search of a victim.”

Weinreb told jurors that the Zhao brothers’ recruitment benefited Harvard by bringing in money to the university and bolstering its fencing program, calling the sons “no-brainer recruits.”

Frank pushed back against the argument that no one was harmed in this case during his rebuttal.

“They are all victims,” he added. “Because when the system is corrupted, everybody loses.”

The trial will resume Wednesday at 9 a.m., with the jury expected to begin their deliberations.