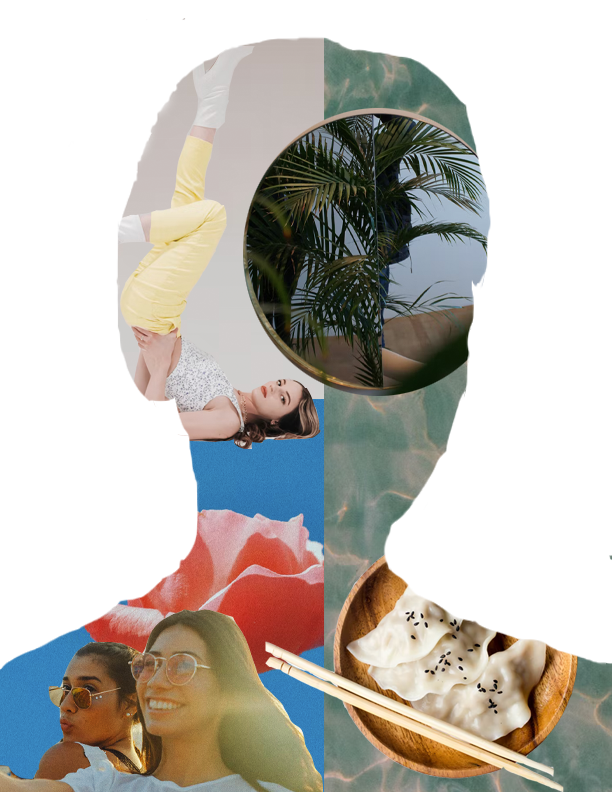 On Finstas and Fractured Selves

My New Year’s resolution was to try my best to stop taking everything so damn seriously: do more, think less, lower the stakes. I wanted to do whatever possible to get out of my own head — to reconnect with the humor and voice I felt like I had lost, to move through and inside of my life instead of adjacent to it.
By Kate S. Griem

“Have consulted w myself and a few others and decided that I need to increase my social media usage to improve my mental health 🌤🔔⛸.”

So reads the half-ironic bio of my newly revived finsta, username “katriarchy.” It is a sentence that feels unexpected to me: my relationship with social media has historically been tumultuous and stubborn, cyclic anger-deleting and re-downloading of Instagram a feature of my high school years. The self that I saw on my screen always felt false and incomplete, like a misrepresentation of my life was a given.

But for most of my freshman fall, I found myself in an almost dialogic back-and-forth with reality — a form of derealization I assumed to escape feelings of isolation from the people and environments around me. I wrote a paper, but I didn’t feel like the person who had written it. I sat at Annenberg laughing with friends, but I wasn’t quite sure what we were laughing at. It was as if when March 2020 rolled around, some force had pressed pause on my life, sliding a glass wall between me and the life I was supposed to be living. Every context that served as part of the glue that held me together was gone, left either back home in New York or in a pre-Covid time.

My New Year’s resolution was to try my best to stop taking everything so damn seriously: do more, think less, lower the stakes. I wanted to do whatever possible to get out of my own head — to reconnect with the humor and voice I felt like I had lost, to move through and inside of my life instead of adjacent to it.

A close friend (whose finsta, “lunchmeatflowercountryvirus,” is iconic in her circles) gave me an unorthodox suggestion to kickstart my quest: that I re-download Instagram and start my finsta anew. So I logged into my old account.

It was an unusual suggestion, because I often rant to my friends about how social media is one of the worst things in this world. A never-ending stream of articles explains correlations between the use of these apps and increased anxiety, depression, body image issues, and low self-esteem. Big tech companies, having realized they can exploit the dopamine released by likes and comments to turn a profit, literally capitalize off of human insecurity. I cannot say that I’ve ever fallen down the hole of Snapchat Discover or my Instagram feed and emerged happier than I started.

That doesn’t mean I didn’t fall prey to the apps in middle and high school, begging my parents to let me download Snapchat in eighth grade, posting curated Instagram photos at prom and on the beach. The capacity to feel connected to — seen by — such a wide range of people was dizzying and addictive, even as it remained fundamentally unsatisfying.

There is something about taking a picture that makes me feel furtive and uncomfortable, like I am cheating at what it means to remember. Picture-taking helps us shape our own narratives, slicing our lives into predetermined, frozen-time rectangles. So I am both jealous and skeptical of people who post with seeming carelessness, confused by how they can feel such ownership over their photos, and in a parallel way, over the identity being presented in those photos. There’s a dissonance, seeing someone you feel you know present themself online for the first time.

Then I have to remind myself that I have no idea, really, what is going on in their heads; feigned carelessness is too often the opposite. Maybe the point of Instagram is that we are all just supposed to fake it, do the very best we can to stake a claim to our existence in an inimitably chaotic and crowded world.

The first thing I did after reactivating my finsta on January 1 was to go through my camera roll and find 10 pictures I loved for every month in 2021. I posted each series of photos within the span of a half hour, accompanied by long stream-of-consciousness captions where I tried to articulate my relationship with that period of time. They’d go something like this:

“March ish — mentally I was an absolute f*cking mess here like I am remembering the context of some of these photos and the sadness / spirals / etc that surrounded them — but there is something else emerging here which is unexpected warmth. A lot of early March sun and a shot at the food pantry which of course is warm in a whole different way.”

“April ish — this time was far more exquisite than I like or remember to admit. We were on the horizon of something and even though I was stuck in all sorts of anxiety and difficulty adjusting between realities I also experienced a lot of joy and hope and gratitude and forward-looking-ness — so here is to that.”

I skipped September through December, memorializing college with a sole photo of Smith’s tenth floor at sunset instead. (In the late afternoon, when the sky is clear, it is a space so extraordinary it feels like an exception to the rest of my life.)

The aim of this exercise, I think, was to let 2021 catch up to me. If what the pandemic did for me was to forbid time from passing — to tell me that even as things changed around me, I did not have the permission to change along with them — then my posts changed me by force. They turned the experiences and memories that had been grayed over in my mind into snapshots of stark color.

It didn’t take long for me to get a little power-drunk in my new online space. I posted photos of my unprecedented cooking endeavors (“💫the story here is that im breaking my mothers generational cycle of cooking hatred one 😮‍💨step 😮‍💨at a time 🥂”), the chaotic overstimulating hell that I believe to be grocery stores (spurring LOTS of debate in the comments section), and the extreme attractiveness I believe to be Jamie Tartt’s eyebrow slit (thank you, “Ted Lasso”).

I posted a video of my Brooklyn apartment’s roof in the rain and wrote about how endorphins make my muscles sing back and forth with the air. I wrote about how when I walked over a river frozen over with snow on the way back from club ultimate practice, I felt, physically, the winter breathing. I posted sunsets and subway graffiti I thought were beautiful and a picture of my sister in my great-grandmother’s 1930s yellow dress.

As I let my thoughts and the things that I saw fall onto the inarticulable canvas that is the internet, they became inked onto something both more temporary and more permanent than paper. If I could see what made me me laid out in blue-light color — existing entirely separately from my brain — then maybe I really was me. Maybe I could start reaching through the glass wall in front of my eyes to the real stuff behind.

I probably won’t stop railing against Instagram as a company. But using the app has helped me realize one thing: that it is a losing battle to try to pin yourself down. On my finsta, I’m probably the most unfiltered version of myself out there. My account still can’t get at everything about who I am — but in the in-between space it creates, I can try on different selves without obsessing about it.

I want to learn to accept this dissonance, these fractured realities I hold; I have an inkling they can teach me something about being unfinished. Not all the way whole, not all the way true, but a real person all the same.

— Magazine writer Kate S. Griem can be reached at kate.griem@thecrimson.com.