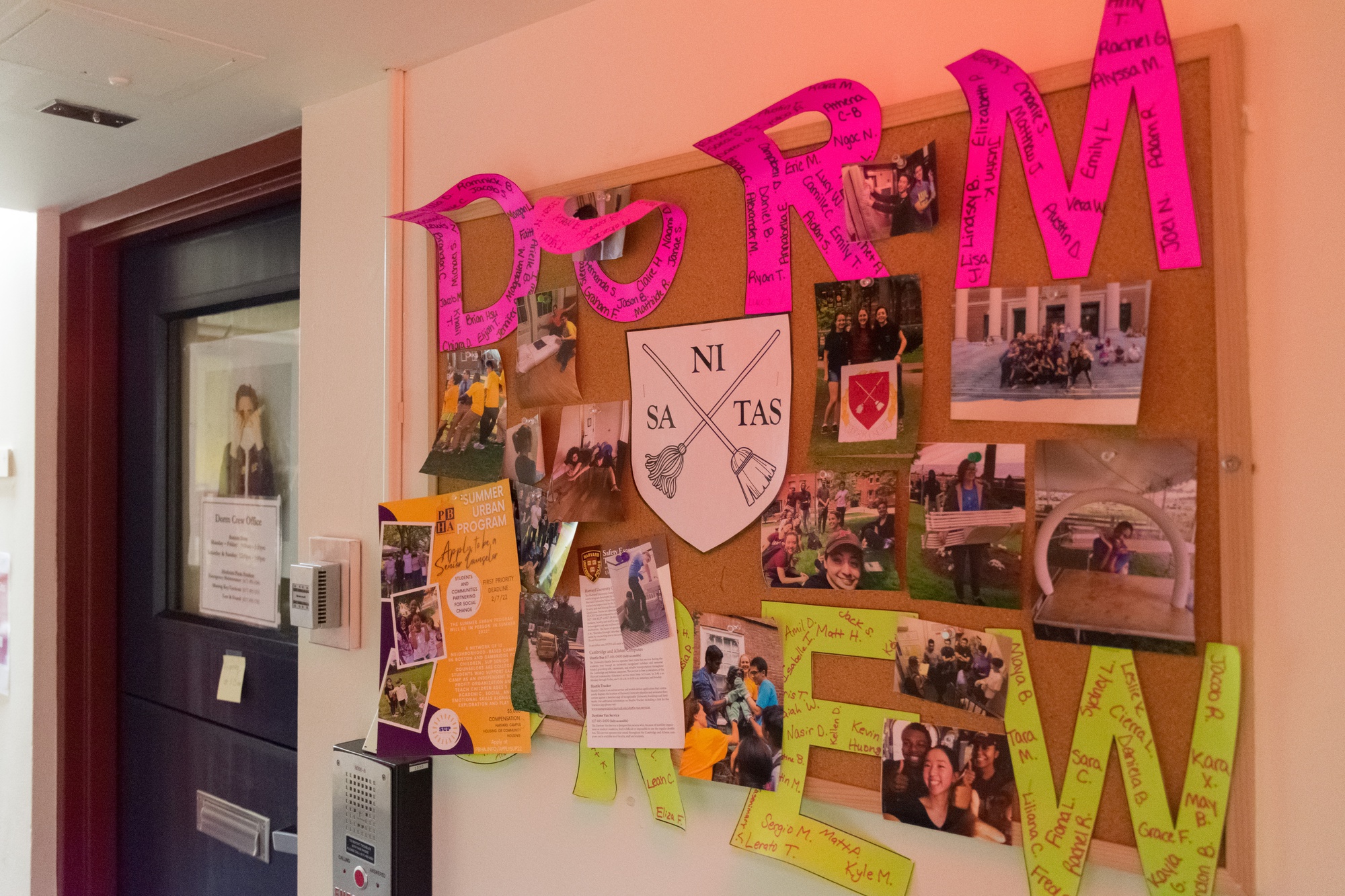 What’s Dorm Crew Outside the Dorms?

By Leah J. Teichholtz, Crimson Staff Writer
The College's Dorm Crew was established in 1951 as the Student Porter Program. By Julian J. Giordano

“Everyone in the room is down to stick their hand into a toilet for money. And that, I thought, was a nice filter for people that I would get along with,” he said of his coworkers.

Stainier went on to become a House Captain, a leadership role in which he oversaw a team of student workers responsible for cleaning Cabot House.

The College began hiring undergraduates to do custodial work in dorms in 1951 through the Student Porter Program, which provided a new source of on-campus employment.

Prior to Covid-19, administrators decided to devise a shift in the function of Dorm Crew, a longtime magnet for controversy. According to organization leaders, administrators had said they wanted students to be responsible for cleaning their own spaces.

Dorm Crew leaders started planning to phase out custodial work in spring 2020 and put together a proposal of new ways to employ members on campus.

That spring, Covid-19 struck. Since then, Dorm Crew’s work has largely halted.

Now, after a 70-year history defined by cleaning bathrooms, Harvard is rolling out a new future for Dorm Crew — one that no longer involves toilets.

‘A Safe Place to Learn What Leadership Is’

When applying to business school, Jose I. Garcia ’19 emphasized the leadership experience he gained as a Dorm Crew House Captain.

Most students first heard about Dorm Crew through Fall Clean-Up, the only freshman pre-orientation program to pay its 200 to 300 annual participants. Through FCU, incoming freshmen spent the week before move-in cleaning dorms for $13.50 per hour.

At the conclusion of FCU, students were encouraged to join Dorm Crew, which paid entry-level bathroom cleaners $16.25 per hour for a minimum of two hours per week. Students could also participate in Spring Clean-Up, which paid them to clean dorms and prepare campus for Commencement in May.

Dorm Crew employed more than 800 students per year through its various programs, according to its website.

FCU participant Guillaume Bouchard ’23-’24 wrote in an email that their days in the program were some of their “happiest and most meaningful yet.”

Bouchard, a first-generation, low-income international student, said the work helped them apply for a Social Security Number and supplement their financial aid package.

“I met there some of the most down-to-earth, genuine people I’ve known in my time at Harvard,” Bouchard wrote. “The work was rarely difficult, the company was wonderful, and the paycheck was a great way to start the year.”

Benjamin E. Frimodig ’21, who presided over the organization as a Head Captain, said Dorm Crew helped him find like-minded friends on campus.

“I came to Harvard, and it was an overwhelming place,” Frimodig said. “To be a part of a community of people at the most prestigious institution in the world that were willing to clean bathrooms to pay their way through college was such a gift.”

Despite glowing reports from many of its members, Dorm Crew has drawn criticism from some academics and undergrads who contend the program exacerbates inequities between low-income students and their peers.

In 2019, Anthony A. Jack, an assistant professor at Harvard’s Graduate School of Education, published “The Privileged Poor,” a book that criticizes programs like FCU for furthering divisions between students of different socioeconomic backgrounds.

Sara Goldrick-Rab, a professor at Temple University, sparked heated debate in 2019 when she tweeted about the program.

Hrolfur Eyjolfsson ’23, who has not participated in Dorm Crew, said he finds the idea of the program “uncomfortable” and “sort of belittling.”

“I know someone that would come into my room, and they’d come there to clean the toilet as I’m just sitting on the couch. It was super awkward,” Eyjolfsson said.

Still, many current and former Dorm Crew members pushed back on these criticisms.

“It’s a way to increase your access to things, to put money in your pocket, and to also give you access to this huge network of students and alumni,” Mercado said.

To Frimodig, criticism of Dorm Crew stems from the “elitist” stigmatization of custodial work at Harvard.

‘A Lot of Empty Promises’

When the pandemic hit in 2020, Dorm Crew paused. But even with the return to full residential capacity last fall, Dorm Crew employees have been consigned to fulfilling work orders for Yard Operations and completing odd jobs during move-in.

“It felt like the College was really using Covid as an excuse to curtail the program, and that their true motives were a little bit more based in some of the bad press that Dorm Crew had gotten,” Frimodig said.

Frimodig said he felt there was “dishonest communication” from the administration during the pandemic regarding the future of Dorm Crew.

“We responded to every curveball that the pandemic threw us and that the College administrators threw us, and we just felt like it kind of ended in a lot of platitudes from them,” Frimodig said. “Just a lot of empty promises and frustrating messaging.”

In the absence of steady hours, many Dorm Crew members, like Naomi Davy ’22, have opted to take up new on-campus jobs.

“I’m now a rep in the Office of Sustainability, and I really like that job,” Davy said. “But I don’t think I would have actually taken that job if Dorm Crew was still around. I really enjoyed it.”

Former Dorm Crew member Ryan J. Golemme ’23 said he believes maintaining the program is not a priority for Harvard and fears for a loss of institutional memory.

“The longer that we’re waiting for [Dorm Crew’s return], the more of that institutional knowledge is lost, and the harder it’s going to be for us to re-form again,” Golemme said. “To be honest, I think Harvard kind of knows that.”

According to Mercado, students will not have the opportunity to take part in Spring Clean-Up as normal this year.

The Fate of Dorm Crew

In early 2020, Dorm Crew Head Captains wrote a 17-page “Strategic Plan” outlining a future for the program beyond bathroom cleaning — which made up the majority of Dorm Crew’s work.

Mercado said that in finding a new direction for their organization, it was important to maintain opportunities for “meaningful, accessible, flexible student employment.”

Language Center director Andrew F. Ross, who will oversee Dorm Crew, said ESS is “enormously excited” about their new relationship with the organization.

“What’s of great interest to us is Dorm Crew’s long-standing ability to self-organize and to recruit and to train student leadership,” Ross said. “Our intention, really, for this semester is to ensure Dorm Crew’s continuity, first and foremost.”

As early as next fall, some Dorm Crew members will begin doing audiovisual work for residential houses and in some classrooms across Harvard, Ross said.

But former Head Captain Daniel I. Mendoza ’21 worries that without custodial work, there will be fewer opportunities for flexible and high-paying employment for Dorm Crew employees.

In spring 2020, Dorm Crew hired 150 students for term-time work. But, according to Ross, ESS could only hire as many as 45 students if each works 10 hours a week.

Mendoza said it is difficult to imagine Dorm Crew changing, but he is optimistic about the organization’s future under ESS.

“They’re going to keep that spirit of Dorm Crew, even though it might not look the same,” Mendoza said.