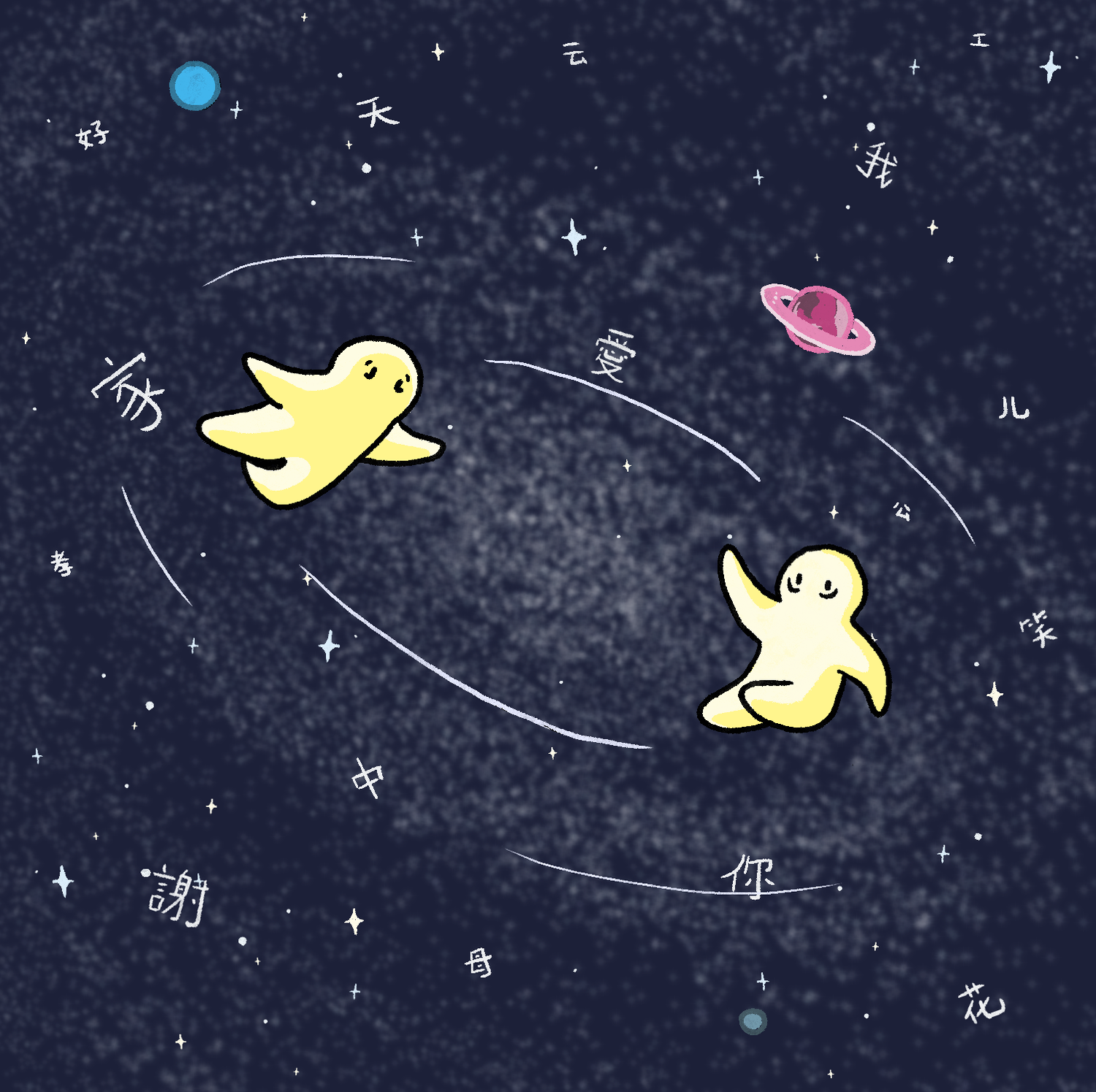 Two cartoon-ish figures — a mother and a daughter — in space, with the latter spiraling out of orbit from the former. Set against a background of stars which take the shape of Chinese characters or English letters. By Michael Hu
Advertisement
Advertisement

Could I ever fit in if my own voice screamed foreign?
By Kaitlyn Tsai

The question, coming from my friend’s mouth as we stood in line to enter our first grade classroom, seemed simple enough. Yet as the post-recess din around us began to fade, I just stood and blinked, taken aback.

“The? The?” I offered, my cheeks heating up.

“You’re saying it like ‘duh.’ It’s the,” she corrected me, spittle flying from her tongue.

“The,” I repeated. I thought about the the’s I’d grown up hearing from my parents, whose voices had always felt like home. Were we getting even this most fundamental word wrong? A sense of shame began to take root in my stomach, a seed of understanding planted: We’re outsiders.

Though I grew up with both Mandarin and English, I primarily spoke Chinese or Chinglish at home. As I set down my backpack after school, I would chatter away as my mom asked me questions about my day. Our family dinners were always animated with conversations about everything from my sister’s social life to the news. Mandarin played such a core part in our lives that I took Saturday language classes from preschool to eighth grade and two years of honors Chinese classes in high school. But I spent most of my childhood and early adolescence trying to distance myself from the language.

Despite growing up in a predominantly Asian community in the Bay Area, I never felt at ease embracing my Taiwanese identity. I remember boys putting on exaggerated Chinese accents and laughing at them. I remember peers at my Saturday classes making ching-chong jokes. I remember a Chinese boy in my second grade class picking up a piece of nian gao (steamed rice cake) my mother made for our school’s culture week, wrinkling his nose, and saying loudly enough for my mom to hear, “Eww, what is this? It looks like poo.”

I remember the boys around him giggling.

Perhaps these were instances of ingroup joking; perhaps it was internalized racism. Perhaps both. Regardless, I grew deeply self-conscious about my identity — and by extension, my accent, my flagrant Asianness. Was I supposed to suppress and mock those parts of me, the way that my Asian peers did? Could I ever fit in if my own voice screamed foreign?

I wanted nothing more than to strip my tongue of the tang of Mandarin, but how could I do that when it was inseparable from my home? I didn’t even hate the language itself. I just hated the way it seeped into my English and hated what, to my peers, it stood for.

Soon enough, English became my language. As I blossomed as a writer, I unearthed new ways to turn everything I thought and felt into art — art that people appreciated, art that made me feel not just included but admired.

My brain still defaulted to Chinese when speaking with my parents, but increasingly, I found it easier to express myself fully in English. On birthdays and holidays, I wrote my parents cards in English, cards that my mother in particular struggled to understand, whose meanings I doubt she ever truly extracted. And when I was upset, I spoke in rapid-fire English, completely abandoning any effort at Chinglish.

At a rate that neither of us could keep up with, I spiraled farther and farther from being able to communicate with my mom. I grew impatient when I would speak to her in English, only to have to repeat myself because she couldn’t follow everything I said. I made passive-aggressive corrections when she grasped for the right words.

And while I recognized how disrespectful and arrogant my actions were, I remained too proud to admit it or to stop them.

Our conversations grew confusing and tense. I never knew what my mom misunderstood, and she never knew how I’d react if she asked for clarification.

In high school, in the middle of one of those trivial-turned-serious arguments, she finally turned to me and said, her voice a blade, “Can I be honest with you?”

She glanced away at her bedroom floor.

“I really hate the way you speak to me sometimes. When you talk in English, I don’t understand maybe 40 percent of what you’re saying because you talk so fast, and it takes time for me to process what you’re saying. But I usually nod along because you get so impatient when I ask you to repeat yourself, and I” — a tear rolled down her cheek — “I just feel so stupid,” she croaked. “I know it’s my fault I haven’t tried hard enough to learn English. But it just gets harder and harder as I get older.”

The tears I’d kept at bay for the past hour finally streamed down my cheeks. To see my mom, one of the sharpest and most assured women I know, in tears — and to know that I caused them — devastated me.

Between sobs, I delivered as much of a rambling apology as I could. I didn’t try to explain myself. It didn’t feel right.

But I didn’t think it could just be OK; I had to make it OK.

Slowly, I began paying more attention to the words coming out of my mouth, actively reigning in the fast-paced, English-speaking side of me. I tried to think about whether I actually knew how to say something in Chinese, and if I did, to say that instead. I started texting my parents and writing cards to them in Chinese, which required several drafts, white-out, and heavy dictionary use.

My efforts, especially when it comes to how I talk, aren’t perfect; linguistically retraining your brain, as my mother told me and as I’m always learning, is hard. But my mother seems more at ease when we talk. Save the occasional writing errors, she can fluidly read the cards and messages I write for her — and I get the sense that, even with my clumsy Mandarin, even when I feel like I’m not expressing myself as well as I could have in English, she picks up on every sentiment I’m trying to convey.

For my mother, learning English is a matter of survival, of getting by in this world. Mandarin, by contrast, provides her with a home. When I pause to think about how to say something in Chinese or rewrite a character for the third time, I try to tamp down the frustration that instinctively rises. I remind myself that this is how I offer her refuge.