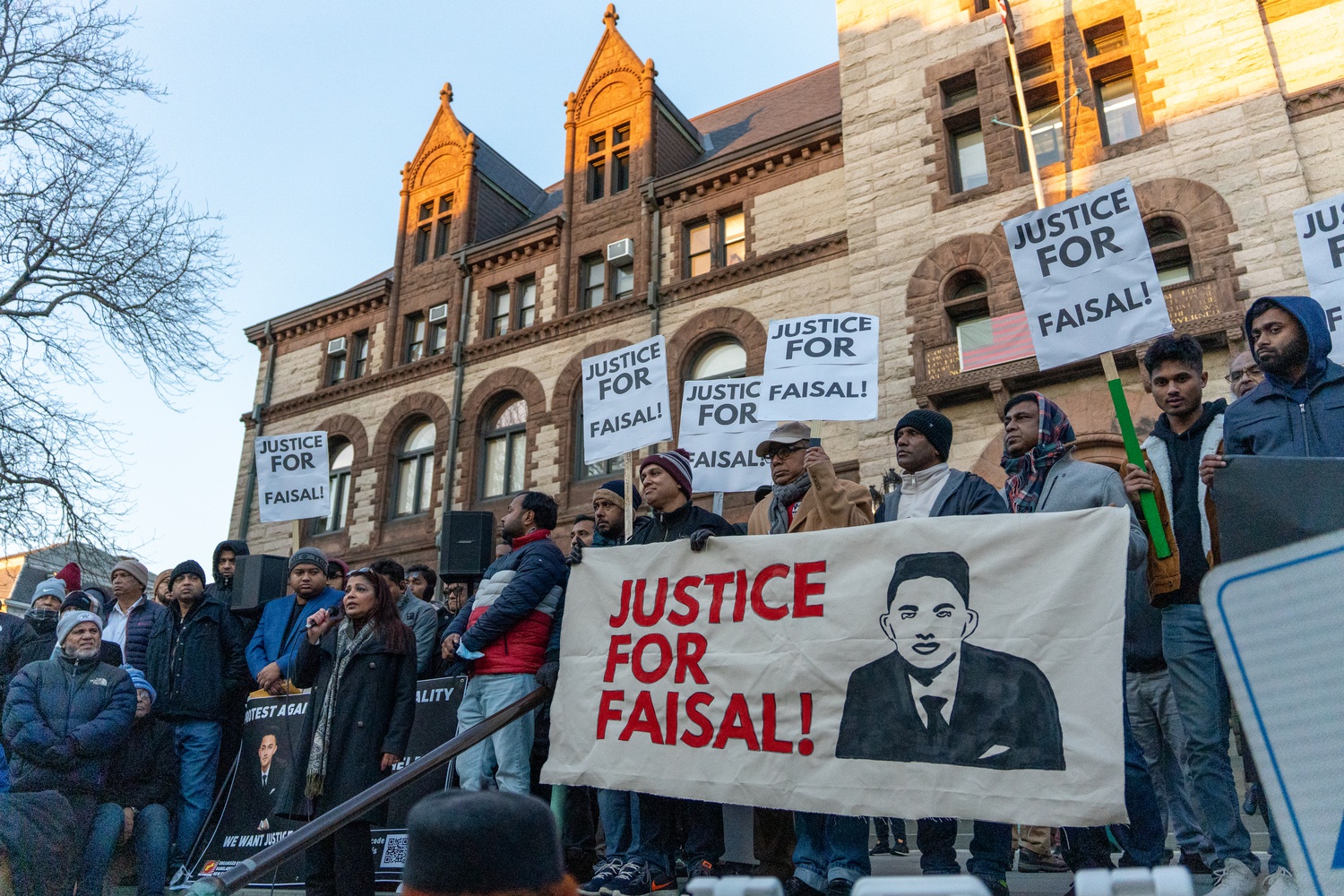 The Cambridge Police Department attempted to quell resident outrage and address questions from activists and City Councilors at a special Cambridge City Council meeting Wednesday on the fatal shooting of 20-year-old Sayed Faisal.

During the Wednesday meeting, public comment stretched out for more than an hour as dozens of Cambridge residents, organizers, and students called for changes to the city’s current policing system, questioned the city’s training practices, and demanded increased funding for public safety alternatives.

The City Council convened the meeting in the wake of the Jan 4. police killing of Faisal, a Cambridge resident and student at the University of Massachusetts Boston, by a CPD officer. The death of Faisal galvanized protests against police brutality across the city, with residents demanding answers from officials and CPD reform.

According to a CPD press release, officers responded to a 911 caller who reported that a man jumped through a window and was harming himself. Cambridge Police Commissioner Christine A. Elow said during the Wednesday meeting that CPD officers attempted to verbally engage with Faisal while pursuing him through five blocks in Cambridgeport. When he allegedly moved toward them wielding the knife, a CPD officer fired a non-lethal sponge round, and when that failed to stop him, an officer shot and killed him.

Jordan Ahmed, an organizer with the Muslim Justice League, called on the City Council to reallocate police funding to mental health and other support resources.

“I ask you not if you will defund the police, but instead when — when will you demilitarize our police force, when will you fund alternative responses to the mental health crisis?” he said. “When will you listen to us?”

Muslim Justice League Executive Director Fatema Ahmad, who has spoken out against the shooting of Faisal, criticized what she saw as Cambridge’s lack of action on police alternatives.

“What I know about Cambridge is you imagine the city to be very progressive,” she said. “But I know as an expert on policing, from your police budget, your police inventory, and your policies, that you’re truly not.”

James Barrett, Director of the Clinical Support Unit for CPD, said that the department does employ clinical social workers, but they were not on scene for this incident because Faisal had a weapon.

“Once we have the situation of a weapon present and a person actively bleeding, the first response would not be the clinician responding to that scene,” he said.

Elow defended the department after many residents demanded reform during public comment.

“Policing is all about the sanctity of human life,” she said. “We have set the bar when it comes to outreach and engagement with our most vulnerable.”

Last week’s city-held community meeting drew criticism as some residents aired their disappointment with how it was run. Kenneth E. Reeves ’72, former mayor of Cambridge and current NAACP Cambridge president, said he left the meeting “dumbfounded” and “confounded.”

Suhail P. Purkar, an organizer with the Party for Socialism and Liberalism, said he was “deeply disappointed” by “non-answers” given at the meeting, criticizing the police commissioner, city officials, and the district attorney’s office for a lack of information. Purkar also demanded the release of the name of the officer who shot Faisal and an unredacted police report.

Monica Raymond, a longtime resident of Cambridge, said CPD is “totally failing” at its duty to protect civilians.

“I’d like to be able to call the police and make sure that no one is going to be dead,” she said.

“The community is asking for an alternative response,” said Betzy Otero, a Cambridge HEART responder. “We’re demanding for change and it has to happen today.”

Earlier this month, Cambridge HEART released a statement in response to Faisal’s death calling for changes to emergency response in Cambridge.

“We believe that when members of our community are in distress or are experiencing a crisis, they should be met with patience and compassion, not with guns,” the group wrote.

City Manager Yi-An Huang ’05 and police officials fielded questions from Mayor Sumbul Siddiqui on behalf of the city council. Officials were pressed on Cambridge’s training, use of force, and mental health crisis response policies, as well as potential funding for Cambridge HEART.

CPD Officer Cameron Deane defended the department’s use of force training and policies and argued that force is sometimes appropriate even when dealing with an armed offender experiencing a mental health crisis.

Deane said that while he supported officers subduing an individual without lethal force, “that can’t be the only option.”

According to Warnick, Cambridge’s use of force policy states police officers should “not use deadly force upon a person, unless de-escalation tactics have been attempted or failed or are not feasible,” adding that force must be “necessary to prevent imminent harm to a person” and “proportionate to the threat of the imminent harm.”

Multiple residents objected to the department’s training, which calls for officers to target the torso of a subject when firing at them. Deane defended this policy, which he said is to prevent rounds from hitting unintended targets due to the accuracy of police officers.

“When we target practice at the range, the targets have usually a pretty fairly wide berth to them,” Deane said. “It’s not a precise thing that we can always make happen, so the arms and the legs, especially if they’re moving, become very difficult targets.”

City Councilor Quinton Y. Zondervan argued that this policy supports his belief that police officers should not carry firearms.

“The problem is not the training. It’s the gun,” he said.

Deane pushed back on this, telling councilors that sending unarmed police officers to handle armed individuals in crisis is “potentially setting them up to get hurt.”

Though councilors passed a motion to add an extra hour to the meeting, many questions remained at the end of the session, which are set to be discussed at a subsequent special session on Jan. 25.