In Cambridge and Dhaka, Protests Erupt in Wake of Police Shooting of Sayed Faisal 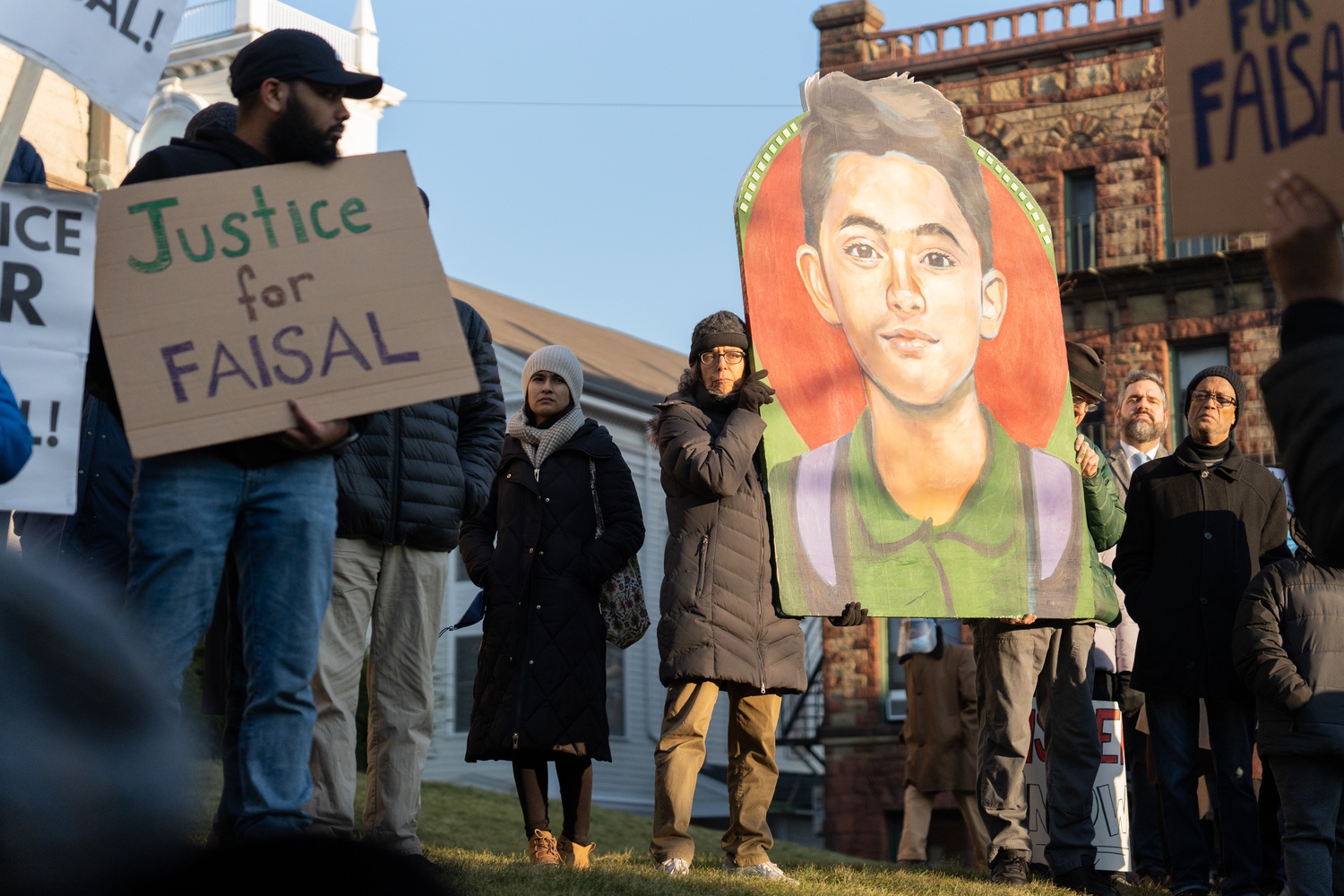 An outpouring of grief and anger over the fatal police shooting of college student Sayed Faisal swept the steps of Cambridge City Hall Monday as demonstrators demanded answers and reform from officials.

Sayed Faisal, a 20-year-old Cambridge resident and computer engineering student at the University of Massachusetts Boston, was fatally shot Wednesday by a Cambridge Police officer after the department alleged he approached officers wielding a knife. According to a Cambridge Police Department statement on Jan. 4, a 911 caller reported that Faisal appeared to be harming himself, prompting the police pursuit that ended his life.

More than 200 people rallied outside Cambridge City Hall ahead of a contentious City Council meeting defined by questions surrounding Faisal’s death. The Bangladesh Association of New England organized the protest, the second one in a week after Faisal’s death. Several other local advocacy groups supported Monday’s demonstration.

Despite calls from residents and local students to identify the officer who opened fire on Faisal, CPD has not released a name. CPD spokesperson Jeremy C. Warnick said Monday that the officer, who was placed on administrative leave after seven years with the department, has never received a complaint.

Faisal’s case has gained international attention. In Dhaka, the capital of Bangladesh, hundreds of protestors formed a human chain Monday in front of the Ministry of Foreign Affairs ahead of the visit of a U.S. national to demand justice for the Bangladeshi American student.

The act spurred the U.S. Embassy in Dhaka to extend its condolences to Faisal’s family. In a Monday statement, U.S. Embassy spokesperson Jeff Ridenour wrote that the Embassy “support[s] calls by the local community and government for a thorough and transparent investigation by the District Attorney’s Office.”

Tahamina Gani, a Cambridge resident for 41 years who lived close to Faisal and often saw him playing sports in the streets, said she attended the City Hall protest to seek answers about his death.

“Why did he die? They only need to shoot his leg,” she said, echoing calls from the rally’s speakers against the use of lethal force by police.

Fatuma Mohamed, youth advocacy officer for the Council on American-Islamic Relations, read a statement provided by Faisal’s parents, Sayed Mujibullah and Mosammat Shaheda. Faisal — whom they called Prince — was never violent toward others, had no record with law enforcement, and “always made sure that those around him felt appreciated,” they said.

Pervin A. Chowdhury, the president of BANE, begged parents to check on the mental wellbeing of their children and called on protestors to persist in what could be a lengthy battle.

Barbara J. Dougan, a legal counsel for Faisal’s family, detailed four aspects of the legal process ahead to deliver “the justice that we’re seeking for Prince,” including an ongoing investigation by the Middlesex District Attorney, an inquest that will be held by the courts, a possible lawsuit from Faisal’s family, and broader systemic changes to policing.

Dougan noted it was possible the inquest may not take place until 2024, eliciting a wave of booing from the crowd.

Suhail P. Purkar, who spoke at the rally on behalf of the Party for Socialism and Liberation, said in an interview with the Crimson that the news of Faisal’s death was “very surreal.”

“I was with the family just a few days ago, and the grief is something that’s very difficult to put into words,” he said. “It’s so overwhelming.”

But Purkar said that Monday’s turnout gave him hope and was an “amazing sight.”

“To see Black, brown, white, Latino, you know, India, Pakistan, Bangladesh — this is exactly the sort of multinational unity that we need to make sure that we get justice for Faisal,” he said.

A string of protests hosted by BANE is set to follow, with the group organizing demonstrations on Jan. 11 in Cambridgeport, Jan. 14 in Harvard Square, and Jan. 21 at the Middlesex County District Attorney’s Office.