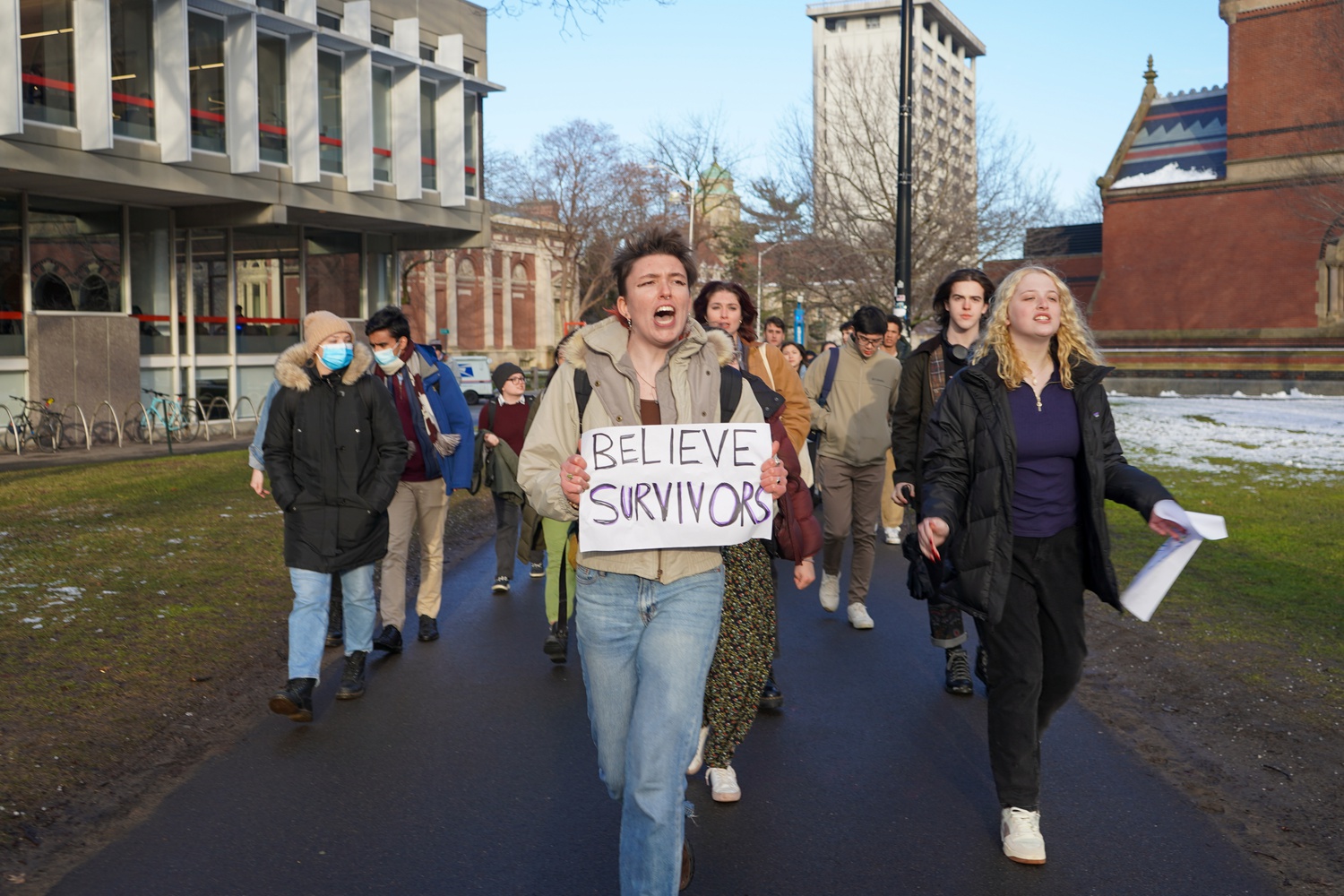 More than 100 students walked out of embattled Harvard professor John L. Comaroff’s class Tuesday afternoon, protesting his continued presence on campus after he was placed on leave last year for violating the University’s sexual harassment and professional conduct policies.

Students flooded Comaroff’s classroom in Northwest Building classroom B108 — overflowing into the hallway — to protest the first lecture of his class African and African-American Studies 172X: “Colonialism and its Postcolonial/Decolonial Afterlives: Critical Readings.”

As Comaroff began to speak, students rose from their seats and filed out of the classroom, chanting, “Justice for survivors,” and “No more Comaroff, no more complicity.”

As the walkout begin, Comaroff, a professor of African and African American Studies and Anthropology, broke into a smile and nodded at the protesters. As the last students left the classroom, one told the professor, “Smile in hell, asshole.”

The walkout was organized by members of Our Harvard Can Do Better and the Harvard Graduate Students Union-United Auto Workers’ Feminist Working Group. Students associated with Fossil Fuel Divest Harvard and the Student Labor Action Movement also attended the protest.

Comaroff returned to the classroom for the fall 2022 semester, and his first class faced a similar walkout and protest.

Gay first put Comaroff on paid leave in 2020 after an investigation by The Crimson found that at least three female graduate students had contacted Harvard’s Title IX office with complaints of harassment and professional retaliation against the professor.

Comaroff’s class — which began at 3 p.m. — was nearly empty within 10 minutes, with only two other individuals remaining. Three students were enrolled in the course as of Tuesday morning, per the FAS Registrar’s office. The other course that Comaroff teaches, African and African American Studies 190X: “The Anthropology of Law,” has one student enrolled.

Protesters chanted, “Time’s up,” and “Shut it down,” as they marched to the Barker Center, where several taped posters and pages from a 2022 lawsuit filed against Harvard to his office door. The lawsuit, filed against the school by Anthropology graduate students Margaret G. Czerwienski, Lilia M. Kilburn, and Amulya Mandava, alleges that Harvard ignored and mishandled allegations of sexual harassment against Comaroff.

HUPD spokesperson Steven G. Catalano declined to comment on the presence of officers at the walkout, citing a longstanding department policy not to comment on personnel and security measures.

Austin Siebold ’23, who said she was the first to flag Comaroff’s courses to the walkout’s organizers, said she learned he was teaching this semester after scrolling through Harvard’s course catalog.

“I saw this class, it was on colonialism, postcolonialism and decolonialism, and I thought that sounded really interesting and it fit on my schedule,” she said. “And then I clicked on it and it was taught by John Comaroff and I was like, ‘Holy.’”

Siebold then reached out to activist groups to help plan the event.

“I enrolled in the class and used information I was able to gather from that to help me plan this,” she said. “I was the first person in that room.”

Our Harvard Can Do Better — an organization focused on combating campus rape culture — described Comaroff’s continued presence at the University as “shameful” and called for his resignation in a statement endorsing the walkout.

“This man is not safe to interact with undergraduate students,” said organizer Rebecca S. Araten ’23.

“Harvard is marketed as a place where all students should be able to succeed and get the best education in the world. And the reality is that our campus promotes a culture of sexual abuse, a culture of misogyny and harassment and discrimination,” added Rosalie P. Couture ’26, another organizer.

In an emailed statement, Comaroff’s attorneys Norman S. Zalkin, Ruth K. O’Meara-Costello ’02, and Janet E. Halley wrote that Comaroff “categorically denies that he ought to resign” and that he “is doing nothing to create unsafe conditions for any Harvard student.”

“He is fully authorized to teach Harvard students who sign up for his courses,” they wrote, adding “the claim that he poses a danger is ludicrous in light of the actual facts.” 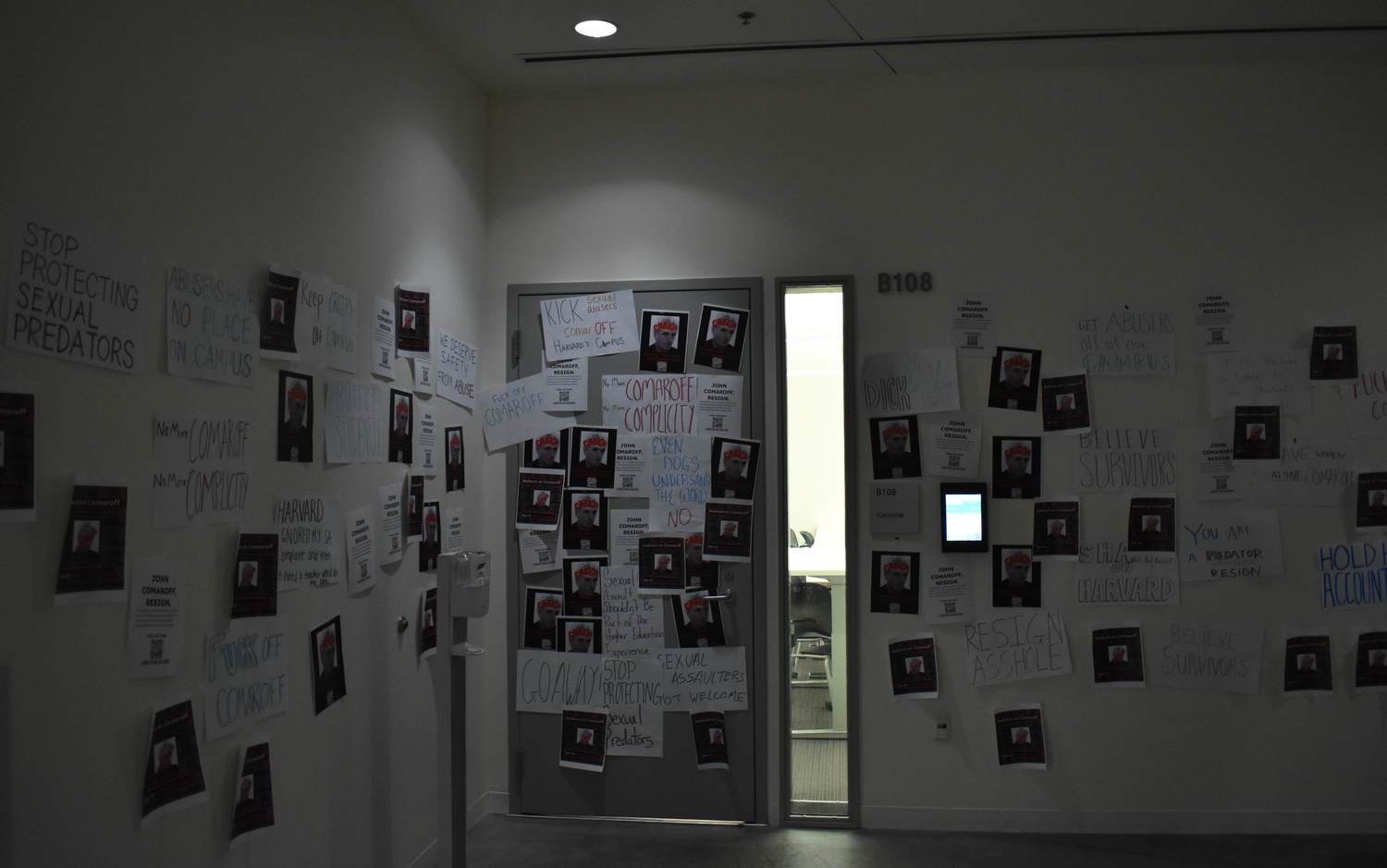 Tenzin R. Gund-Morrow ’26, a Crimson editorial editor, said he hopes a new administration will bring changes to the University’s policies around handling allegations of harassment and misconduct by faculty.

“I’m just hoping that with any change in the administration, there will be some shift in the policy,” Gund-Morrow said. “But obviously, as the organizers said, that is sadly a low chance.”

Hannah L. Munzberg ’25, who attended the demonstration, said seeing so many other students protesting made her “hopeful.”

“It’s nice to see that it’s not just me that’s angry,” Munzberg said.

Koby D. Ljunggren, president of HGSU-UAW and a Ph.D. candidate in biophysics, said they were “so proud of our undergrads for collectively getting together and planning this.”

“It really warms my heart,” they said.

Ljunggren added that while the protest “might be symbolic in nature,” continued pressure on the University is critical.

Kilburn, another plaintiff in the lawsuit against Harvard, tweeted that she “wept” upon seeing photos of the protest.

“Because no one should have to go through what I went through with John Comaroff to get an education,” Kilburn wrote. “Because Harvard was warned about Comaroff and did nothing, but these students are making sure warnings reach everyone.”