Frankenbike: Spicing up the Streets of Cambridge One Vehicle at a Time 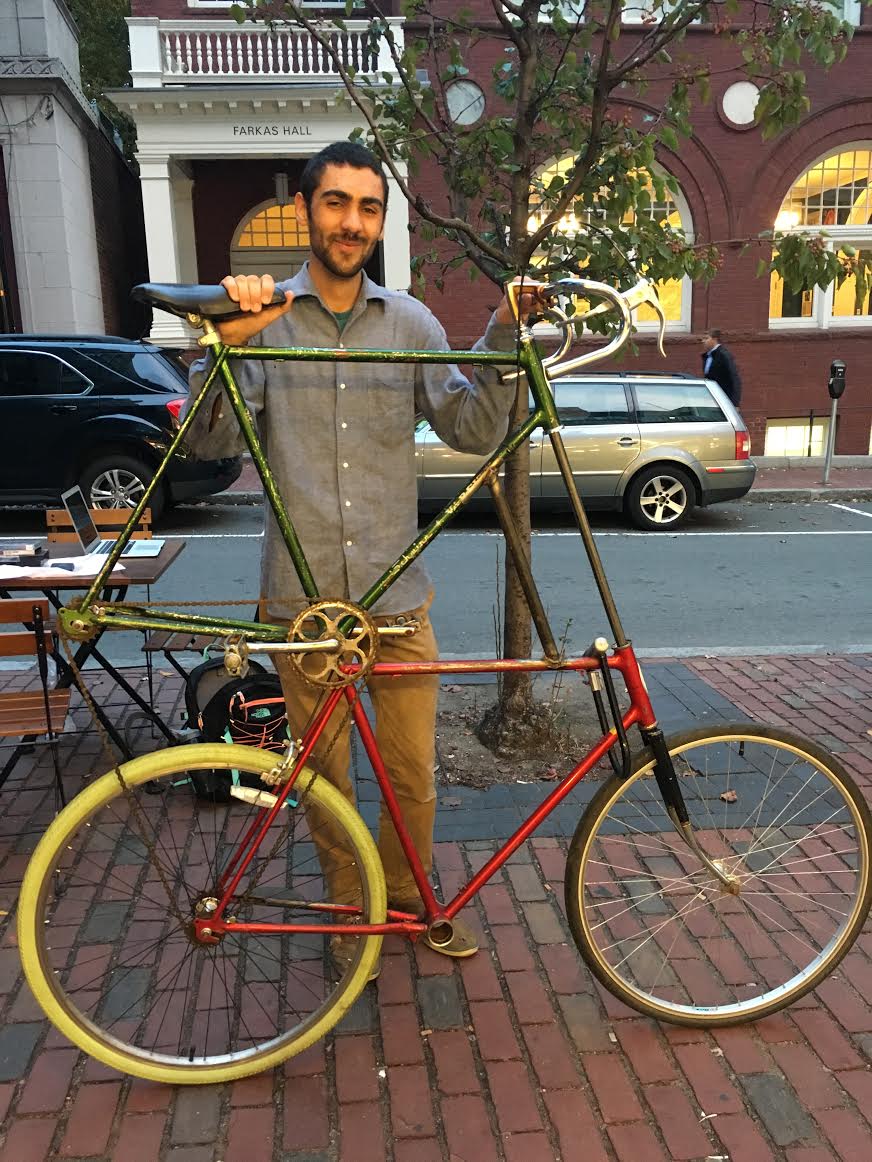 It’s a bird! It’s a plane! It’s a… what exactly is that? If you've been strolling through the Square in the right place at the right time this year, you may have had this exact thought after witnessing Billy Orman ‘16 riding on what appears to be a bicycle straight out of the circus. Naturally, seeing a Harvard student elegantly cruising by on his frankenbike raises a couple questions. Don’t fear, the Flyby investigation team is on the case.

Flyby: What was your inspiration for making this?
B.O.: I can’t claim that it’s an original design, there’s actually a whole subculture of hard-core bike enthusiasts who ride these modified bicycles. This type of bicycle with the two frames on top of each other is called a tall bike. There’s this one particular biker gang based in Somerville called SCUL, which stands for Subversive Choppers Urban Legion. I had been on a few rides with them over the summer and I just fell in love with these tall bikes when I went riding with them.

Flyby: What are rides with the bike gang like?
B.O.: Basically what they do is go out on rides around Boston every Saturday night, and they ride these crazy modified bicycles with lights and speakers and ride through Boston blasting funk music.

Flyby: Do most members buy their bikes?
B.O.: No, there’s actually an interesting culture with bikers, they have kind of a DIY ethic and I kind of like that idea. I spent like $10 on this bike. It’s kind of a Frankenbike really, there are pieces from 7 or 8 bikes here. I only had to buy the brake line, everything else is scrounged.

Flyby: Do people ever ask you any weird questions when they see you riding it?
B.O.: No not really, everyone’s been super supportive. A lot of the time people will ask me if I built it, and I’ll tell them I welded it. Then they’ll be like, “You know how to weld?” And I’m just like, “Yeah dude it’s just like gluing but with metal!”

Flyby: Do you ever worry about it getting stolen in Cambridge?
B.O.: No, I honestly don’t even know why I keep a lock with me. I guess it’s just out of habit because I do actually have a normal bike that I lock up every now and then. But I think I’m safe because no one can even ride this thing.

Flyby: Do people ask you all the time if they can try to ride it?
B.O.: Yeah! I mean not all the time, most people are like, “No I’m not even going to try.” But the bold and the brave ask me to ride it– however only 3 people other than myself have been successful.

Flyby: Do you ever get any strange comments from strangers?
B.O.: You know I thought I was gonna get some heckles like, “What the hell is that thing?!” and “Hipster!” but I haven’t received any of those. Actually, just as I was riding here I came out of a record store to find a huge tour group crowded around my bike taking pictures of it and I was like, “Excuse me can I get my bike?” and they were like, “This is yours? This is incredible!” So yeah I’m really enjoying it, it’s been really well received.

Keep on riding Billy, we can’t wait to see what your future projects have in store.