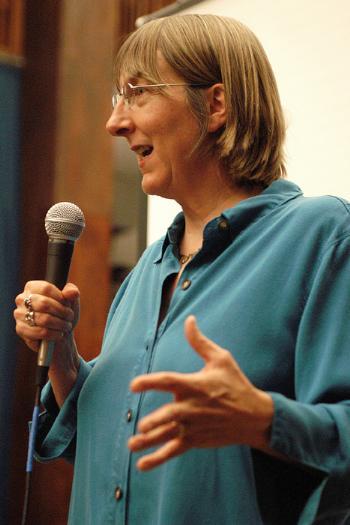 Carol J. Adams, author of The Sexual Politics of Meat and The Pornography of Meat, drew fame in feminist-vegan-theory circles
By Elizabeth W. Green

Carol J. Adams, author of The Sexual Politics of Meat and The Pornography of Meat, drew fame in feminist-vegan-theory circles when she linked “species” oppression to gender oppression. She argues that the objectification of women and animals follow similar patterns: both the fairer sex and the four-legged set are sexualized, dehumanized and finally abused. FM caught up with her after she spoke at Quincy House and at the Law School last week.

1. You were billed across campus as a “feminist-vegetarian theorist” offering an “ecofeminist analysis of the interconnected oppressions of sexism, racism, and speciesism.” In your presentation in the Quincy House dining hall last week you called asparagus a phallic symbol and said parsley was representative of pubic hair. Should we really take you seriously?

Since when is a cigar only a cigar and an asparagus only an asparagus? Most people aren’t willing to look at things other than how we have been trained to look at them. Images that are in our face naturalize oppression, and re-enforce dominance by animalizing women and feminizing nonhuman animals—serving them both up as consumable.

2. The rock group Consolidated sings a song with you on their album Friendly Fascism. Do you consider yourself a friendly feminist?

All arrangements were accomplished with a handshake and a smile.

3. You feature a variety of pornographic images in your books and presentations. Has anyone ever come to one of your talks and been disappointed to find ecofeminism?

Yes, and that’s why we no longer have the pay-as-you-exit fee arrangement.

4. You coined the phrase “anthropornography.” Can you define that term, with reference to the popular science fiction series “Animorphs”?

Anthropornography is the depiction of non-humans as prostitute-animals who desire to be eaten. From this month’s Vanity Fair with a dead chicken in high heels, to the “Turkey Hooker,” animals’ suffering is made into sexualized fun. With anthropornography the inequality of species conveys the inequality of gender; desire hides dominance. While vegetarians, vegans and animal activists are accused of anthropomorphizing animals—of projecting human qualities onto nonhuman animals—it seems that really it is meat eaters and anthropornographers who do this. Animal activists know that animals are like human beings because human beings are animals. “Animorphs,” through its sympathetic magic theme, suggests this truth too.

Personally, I believe in nonviolence, but some of my friends have offered to take down Hugh Heifer for me.

I have pet peeves, pet subjects, pet grudges, but no companion animals.

7. Do you object to wild animals killing and eating each other?

It’s always fascinating how meat eaters become consumed with the eating habits of wolves and lions and hyenas when we start discussing how farmed animals are raised in warehouses, fed newspapers and recycled body parts of other herbivores, then slaughtered. Let’s see, is it wolves or human meat eaters who could live on tofu, tempeh and other vegetable protein?

8. You come down pretty hard against pornography and rape. But some argue that the release provided by pornography actually prevents sexual violence. Any suggestions for an alternate means of release?

Martha Vicinus explains the problem with defining sexuality from an “overwhelmingly male and heterosexual” point of view: “Sexuality in general is defined in terms of the male orgasm; it is like a powerful force that builds up until it is spent in a single ejaculation.” When we have equality, we might also be able to envision a sexuality that doesn’t require objects.

10. When she introduced you last week, Quincy House Co-Master Jayne Loader said that when she is faced with an ethical dilemma she asks herself “What Would Carol Do?” Let’s say you have to choose between eating an entire rack of lamb and repealing the Nineteenth Amendment. What would Carol do?

She’d point out that this question participates in a Cartesian mind game, a standpoint arising from male privilege that views everything as being made out of ideas, out of abstractions. It’s the same standpoint that believes women shouldn’t vote and that lambs don’t have feelings or ribs—just racks for someone else to gnaw on.

11. In the movie American Pie, an apple pie serves to awaken a young man’s sexuality. Since apple pie contains no meat products, and can be made without milk, do you approve of this instance of sexualizing food products?

I think it is an homage to Portnoy’s Complaint, where he masturbated into a piece of liver.

No, you’re living in it now. You think change is too hard; not changing is harder, you just haven’t found that out yet.

13. You said in your Quincy dining hall talk that you came up with the idea for The Sexual Politics of Meat while walking down the streets of Cambridge. What about this fair city was it that got you thinking?

It was the act of walking that is operative in this story. Walking, because it is rhythmic, provides the right brain an opportunity to incubate ideas.

14. You often talk about speciesism or species oppression. Besides not eating them, what else should we do to elevate animals in society?

Pedestals always work in a pinch. Heels, as I point out in The Pornography of Meat, damage the spine. I’m interested in getting humans to stop viewing nonhuman animals as theirs to use, eat, experiment upon or wear. It’s curious how dependent humans are for their self-conceptualization on the existence of animals as the opposite, as lower, as the dominated ones, as the edible ones.

15. You have taken your message to many college campuses across the country. I’m sure not all audiences have welcomed you equally. What’s the worst reception you’ve gotten?

Dry crackers and stale grape juice, but thankfully, no one has ever prepared dead animals or the ova of chickens.