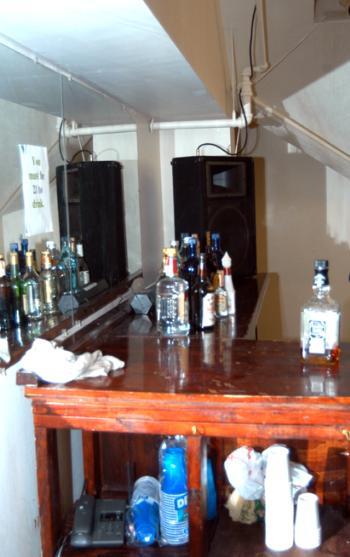 Room With A Crew

Set-up: In the bell tower proper: four singles and a regal common room with well-worn dance floor and bar. This year, the suite connects to eight other singles and two common rooms.

Pros: One of the best views around.

Walking up the sticky steps of the bell tower suite to the fresh scent of Lysol in the common room, it is clear that this is a post-party Sunday in Pfoho. The boys who live here, however, knew exactly what they were getting into. “We picked the room for the parties,” said Jay Pendse ’04, a member of the four-person group that actually lives in the Bell Tower itself. Through the fire door are the other members of their blocking group, as well as a former Eliot House resident who transferred into Pfoho last year.

At least four members of the group had the good luck of getting the highest lottery pick. “We could have gotten better individual bedrooms,” says Pendse, adding that they opted for the party room unanimously. “You can have a party whenever you want, and that’s a lot of fun,” says Dustin A. Cartwright ’04. “The downside is dealing with the administration and organizing everything.”

The most burdensome part of all this—and the most expensive—is the purchase of alcohol. Pfoho does not give a stipend for the Bell Tower to host any parties, although the residents are talking to the House HoCo Chair to try to set that precedent.

There’s a pretty diverse group of regulars at the Bell Tower, and everything from AEPi or FUP, though not represented directly by the residents, have also used the atrium-like party room to host functions. Sometimes people just assume there’s to be a Bell Tower party. One night this year, for example, some eager first-year partygoers knocked on their door insisting that they were there for the party. The residents didn’t know what to make of it. Their spontaneous Guns ’n Roses karaoke jam had suddenly become a public performance for wandering freshman. “They didn’t believe us that there was no party,” said Pendse, “so they just came up and hung out with us for a while.”

Such is life for the guys in the Bell Tower—a life of hospitality, lights, music and sticky floors which, surprisingly, none of them really complain about. Except that Gaurav Yadav ’04-’05 does admit, “It is a little problematic when people bump and grind their way into my room and start making out, but that’s the price I pay and the responsibility I accept in the off-common room bedroom.”

Set-up: Mammoth common room with 10 singles adjoining. This year six Quincy House transfers round out the group, and the four who don’t live in the Ten Man are in a conveniently connecting suite.

Pros: The built-in bar and sturdy pool table that doubles as a massive Beirut table. As James M. Kearney ’04 puts it, “Every night is our own 28-person party if all the guys have only one guest.”

Cons: Every night is a party.

The Ace of Hearts might have been Jonathan B. Durham ’04’s best draw yet at Harvard—for him and for the nine other members who compose the Ten Man. The other members of the famous, or infamous, Currier Ten Man suite give Durham full credit with their head to head victory against the one other ten-person blocking group in Currier vying for the coveted suite this year. By picking that card, Durham secured the pad for his 8 friends from Currier, and the 6 who joined as transfers from Quincy House.

On the weekends the coveted oversized ply-wood ace of hearts Beirut table is removed from the top of the pool table, the furniture disappears from the common room, the kegs appear, and all the stops are pulled as the Ten Man changes from low-key “get-together” to a multiple-keg blowout. People pack the massive room, and inevitably the line is down the stairs and out the door. “In a word: pandemonium,” jokes J. Marshall Smith ’04, when describing what has recently been an every weekend tradition for the Currier 10. Currier House itself actually funds two parties a year, one of which is approaching—the Halloween Bash.

The group is unbothered by the constant activity. “Someone is always hosting something… there is always an excuse,” says William M. Saja ’04-’05.

The guys complain that not a lot gets done, but Smith says that the best part is really “the space, and being able to be together in one room.”

Set-up: The Library Suite itself has five bedrooms and a common room that used to be part of the Cabot House Library. This year, a group of nine senior guys live together by connecting the library suite to a room through the fire door.

Pros: Room comes with funky old library book shelves and books, and it seems to attract eclectic personalities and tastes. “Our parties have a diverse crowd I would say,” notes Jason R. Semine ’04. “We’re not all on one team, not all in one group.”

Cons: It’s haunted, apparently. Plus, clueless freshman and strangers come knocking even when there isn’t a party.

Fox Sports News blares updates from the latest baseball skirmish while several rowdy boys shout to each other: “Yes! He’s eating it! He’s getting so big!” They are screaming about Oscar, their pet fish, who lives in the oversized, day-glow fish tank across from the kegerator. Oscar is sufficiently engrossing for the hosts to pull their heads away from the 55” TV, which stands as a monument in their common room.

Oscar, the TV and the constant flow of beer are only a few of the many perks of living in the Cabot Library Suite, because in a suite large enough to fit over 200 people (uncomfortably), there’s a lot of room for creativity. The wide hallways provide a comfortable home for the high-traffic Beirut table, which is accompanied by a posting of the “Library Suite House Rules” that require both members of a team to run a naked lap around the quad if they get skunked (i.e., they don’t make a single cup).

Besides the standard party-room essentials like the Beirut table and beer funnel, the Cabot suite librarians have equipped their room with a “library lounge,” which is a second large common room wall-papered with tin foil and blue and red construction paper accents. With dimmed lighting and accessories like incense, a Lite-Brite and old-school Super Mario Brothers played to the sounds of classical symphonies, the room is decidedly trippy. “We want people to be able to do whatever they want to do in here, whatever their inspiration leads them to,” explains Matt T. O’Malley ’04.

The boys say that the classic dark wood bookshelves, which came complete with several volumes of Shakespeare, not to mention about 30 rotting CUE Guides, add a touch of sophistication to their party scene. “The fact that it was part of that library gives it some class, some atmosphere,” says George M.J. Morris ’04.

But apparently class comes with a price. O’Malley insists, “This room is haunted by Margaret Coleman Wates,” to whom the room is dedicated in a placard on the fireplace. “I’ve definitely been visited by spirits in my sleep.”

Haunted or not, the Library Suite tends to come with high expectations and a reputation for campus revelry, although the profile has declined a bit in recent years. “I think there are a lot of people who haven’t heard of the Library Suite because there haven’t been that many parties here in the last two years,” says William F. Koehl ’04. But this year, the boys are determined to resurrect their room’s party legacy. They’ve registered for at least four official parties this year, the biggest one being held within the first week of school.

“This year the Quad is holding it down,” says Morris. “The river isn’t holding up its end right now. We go there sometimes, but then we always come back here.” Puffing with pride, the librarians recount that they have even had visits from out-of-town strangers who said they were referred to the room by Quad security guards when they asked where to party.

“Cabot has a really social atmosphere. People are interested in having a scene that they can have fun in, and people like to party in their own house,” Semine explains.